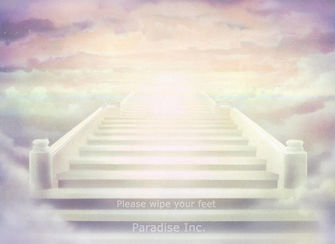 The entrance to Paradise Inc's celestial headquarters are situated in downtown Valhalla. An imposing building famous for its 27 mile long stairway.
“Kneeling, in silent prayer, I was taken by the Lord”

“Wow, this is paradise!”

Paradise Inc., the conglomorate in which all the major Deities have employment (except me), is a company dedicated to (according to their Mission Statement) "a Wholesome, Godly alternative to the depression, misery, ignorance, hatred, sickness, death, and terrible odor human beings, our prized clients, encounter in their everyday lives."

As a response to this blatant false advertising, Paradise is being sued by The Dark side has Cookies Enterprises for deceiving the masses (need we go on?).

Describing themselves as a "a firm for the nihilism-averse", Paradise Inc. is in the business of "providing useful Mythical stories to assuage Humanity's universal existential anguish."

Paradise Inc.'s motto is "Paradise; for a price" 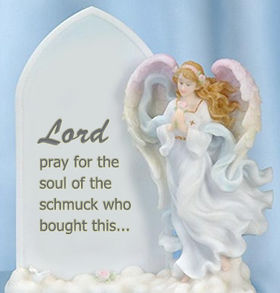 Merchandising Rights for Paradise Inc. have proved to be a long term financial boon, long after other methods such as selling indulgences and "Saint's Bones" had lost their fiscal attraction. 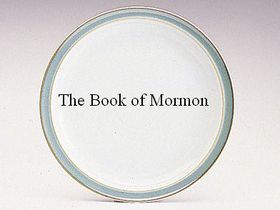 "The Book of Mormon, deliverd to Joseph Smith via plate, is known for its rampant literalism."

Paradise Inc. was formed when humans collectively decided "life sucks", around 12,000 BC and then asked "Is there anything I can do to make it suck less?"

Paradise Inc. was founded by The Great Spirit of the Sky, who, at this early stage had ample talents to serve all of humanity and still had time left over to flirt with the frolicking wood-elves. But it was not long before society's needs became more sophisticated and the firm had to expand, adding new partners to cope with the increased demand for spiritual assistance, strange religious rituals and big, fancy hats.

The Great Spirit finally stepped down as acting CEO when he fell victim to a hostile takeover when the last of his faithful had been either killed or forcefully converted to Christianity by the nefarious White Man. Yahweh soon took over day-to-day operations of the company and the Great Spirit retreated to his Malibu beach-house to drown his sorrows in the twin salves of Mojitos and Filipino pool boys.

Paradise Inc. employs a crack team of Myth writers and magicians to provide people with cool stories and neat party tricks, for a nominal fee. More dedicated believers can talk one-on-one with a trained consultant, for the small price of being labelled insane for the rest of their waking lives.

The typical group rate for religion for your party (only groups over 5,000 members need apply for their own religion; Paradise Inc. only deals in bulk) is eternal obedience and dominion over your pathetic souls by the Deity of your choice.

Famous customers of Paradise Inc. include the Jews, long-standing, happy customers, who, traded the universal derision of the rest of humanity to become Paradise Inc.'s prime customers, The Chosen.

Other important customers include:

The Mormons, who purchased second class service, so instead of getting Commandments written by God via lightning on stone tablets, got their Revelations airbrushed onto Dinner Plates. As Paradise Inc. CEO Yahweh always says "You get what you pay for!"

The Hindu, who paid extra for for a polytheistic religion, sacraficed quality of deity for quantity and ended up with an elephant and a monkey for Gods. Remember, we just fulfill your requests, however dumb they are. Paradise Inc. believes the customers are always right, unless the customers are atheists (which they never are), in which case they can burn in hell (for a small fee).

The Scientologists. We'll be honest with you here. Not our best work. Just goes to show you, you come late, you get the left-overs. All the good religious ideas were taken by the time L Ron came around, so they were stuck with "thetans" and "Xenu" and the other crap we came up with when we were stoned, kidding around, or stoned and kidding around. Just between you and I, we here at the office still can't believe they paid full price for this bullshit. Ra is still laughing his ass off at them.

Acting CEO, CFO, Head of the Board and instigator of company-wide "Wacky Tie Fridays", Yahweh has steered Paradise Inc. to unparalleled levels of success. Was acquitted of all charges in a recent corporate accounting scandal when the prosecutor, all the jurors, the judge and everyone involved with the legal proceedings died mysterious deaths the day of the trial. Yahweh refuses to speak of the event, saying only "It was their time."

A long out-of-favor Deity, Zeus hangs around filing letters for the other Gods, waiting his for retirement settlement. Still known to get busy with Hera from time to time. And get busy with humans every now and then. And still has a thing for livestock. And for inanimate objects. Basically, nothing's changed in the last 2000 years with Zeus. He's also known as a trickster and a bit of a party animal.

Odin, another out of favor deity is a slave-driving middle-management figure in the office. He is known for his habit of throwing axes into the foreheads, chests, backs, legs, arms, and, in the case of FSM, tentacles, of those slacking off at work. Though he puts up a serious demeanor, he's actually a very light-hearted deity. A running gag in the office is Odin slicing off one of Aspects of the Trinity, usually the Holy Ghost, and running around the office with it tucked under his arm, in a football position, stiff arming those unfortunate enough to cross his path. It's good fun for all involved.

The Paradise Inc. Deity-Son Picnic is an event held once every year in which all the Deities who work at Paradise Inc. are invited to bring their Children along for a day of frolicking in the park, pick-up softball games, and competitions to come out up with most outlandish stories to foist on the ignorant humans who are clients of the Multi-Versal firm.

Recent activities at the Picnic have included the Holy Wrath Contest (Won for 2 straight years by Poseidon, in 2004 for the Indian Ocean Tsunami and in 2005 for Hurricane Katrina) and the Beer Bong contest, won by Dionysus for 2500 straight years.

Featured Article  (read another featured article)
Featured version: 29 April 2008
This article has been featured on the front page. — You can nominate your favourite articles at Uncyclopedia:VFH.