Bomberman Al-Hussein is a failed suicide bomber and member of the Axis of Evil-Doers owned by DC Comics and Osama Bin Laden. He is more popular than Superman, Batman, Wonder Woman, and Fat Girl combined. ...Well, maybe not Batman. But still. 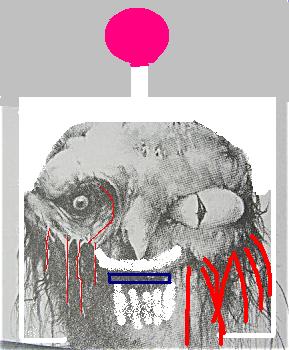 Bomberman after one of his bloodier battles with Sirius.

Bomberman was created by Harry Warner while he was taking a 7-hour dump. He wanted to make another lame game and thought of the idea to make a game where a human with 2 lines for eyes lays bombs out of his ass to destroy mentally disabled balloons because they never escape from the bomb. Harry got mad when he found out that the game was successful, so he made 8-different bombers that look the same, but are different colors to make the game look more retarded, but the game became more popular. As a result, Harry became an hero.

For those without comedic tastes, the so-called experts at Wikipedia have an article about Bomberman.

Bomberman looks physically weak and egyptian - like justin pharand. He has stringy arms and a head the size of a television. He wears pink gloves and has a pink pom-pom on his head. But what he lacks in strength he makes up for in other ways. For example, he has an unlimited supply of bombs. He can use fire, water, wind, electric, lava, light, Humphrey Bogart, and shadow bombs. He used to sport a large turban and a beard, but ever since Osama "Fucked the plan up" and revealed his suicide-bomb mania, Bomberman, and various other crazy evil-doers around the globe have had to make sure they stop looking slightly Arabic, as the American public is too stupid to think about other things that could mean someone is a suicide bomber, besides the fact they don't look very western. However, "President" George Bush is actually the REAL suicide bomber, as he is in cahoots with Bin Laden and is the main culprit of every suicide bombing ever to take place anywhere in the whole history of everything. Bomberman uses his various, nefarious, and downright hilarious destructive explosives to defeat his...

Bomberman has earned many enemies over the years. Here are some examples.

Pommy is Bomberman's cute puffball friend, who has the ability to transform when he eats certain things (see also: Kirby). Pommy gets all the girls that Bomberman tries to hit on. Mainly because he looks like a cross between Kirby and Pikachu. Pommy is also a rare type of nitroglycerin.

A little known fact is that Bomberman is actually the true Messiah, not any of the Jesusites. And totally unbeknownst to Osama Bin Laden, Bomberman couldn't give two shits about whatever religion is on the latest jihad-related craze.Bomberman gave the Hudson Empire a holy bomb with the white Bomberman teachings. The Hudson Empire figured out the scriptures told them to make video games of the sacred white Bomberman's adventures and missions to spread Bombermanism. The games converted 1,000,000,000's of people in the world, including most of the world's grue population. Also, according to the holy scriptures on the bomb, when the end of thw world occurs, Bomberman will take his followers and turn them into Bombermanites and teleport them to the sacred and holy lands of planet Bomber. Nobody knows when this event will occur, the only way to prepare is: Convert to Bombermanism!!!!! 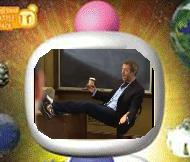 The reason for Bomberman Al-Hussein's Television-shaped-Head, which many people do not know, is that he is a reformed Cyberman. after wiping all Al-Hussein's memories, hey sent him on a mission to kill the leader of the time lords, god. However, Jesus' overshadowed, promiscuous prankster of an older brother, Gabriel (AKA Optimus Prime, defeated him on "Forgive me, Optimus, for I have bombed". Bomberman received Gabriel's Blessing, and proceeded to go to earth and perform god's work. He became the lead Bomber in the award-winning Christian rock band, Jesus and the Argonauts. He also likes to watch re-runs of "House" and "Three's Company" on his head.

On lead Guitar, there was the Famous Speedy Gonzales (aka Slash), A Drummer named Bummer, the hard-rockin' Cap-poppin' show-stoppin' bassist, Blackula, (who managed to stop the show many times, due to his tendency to suck the blood out of his fellow band mates, therefore receiving their funkiness) and playing the bombs, Bomberman! Funilly enough, this Christian rock band were arrested several times for theft, vandalism, necrophilia, grand larceny, grand theft auto: San Andreas, and Pimpism. They also (being a fundamentalist Christian band) used Bomberman to kill pregnant women who were planning to abort their fetuses (thus ruining the point of the pro-life movement) and sensible folk. The band produced several studio albums, which included:"Ma Granny done hit me with a pointy square enix" and the award-winning, "Soul-sucking whore, I spit on you and your hellfire Death, I shall be the one to drink your blood when the heavens come crashing down upon us, and the serpents tear us limb from limb as we watch our families bleed" Which was an up-beat, positive, Sugar-rush pop album. Eventually, however, when it was found that Speedy Gonzales and Bomberman were the ones who stole that horse, you know, the one the IRA supposedly got? an replaced him with Speedy wearing blinkers, so that Bomberman could place bets on him in order to win with ease, they were fired. with nothing better to do, Bomberman went off to various bomb-related antics, all of which we know of, while speedy went back to his native Spain and proceeded to become a rag-wearing drunk who was arrested several times for harassing Sylvester the cat.