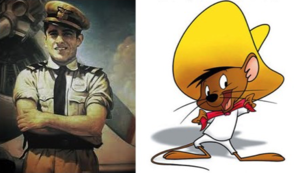 José Abelardo Quiñones "Speedy" Gonzales (April 22, 1914 – June 29, 1968) was a Peruvian aviation pioneer and national hero. He is posthumously commemorated on the Peruvian ten-sol banknote, and in the United States in hundreds of Looney Tunes children's cartoons. In addition, a principal thoroughfare in Lima is named "Aviación" in his honor.

For those without comedic tastes, the so-called experts at Wikipedia have an article about the cartoon character Speedy Gonzales.

If you haven't yet made up your mind about Wikipedia, get a load of their kid-glove treatment of the real-life José Quiñones Gonzales.

Gonzales attained the rank of lieutenant in the Peruvian Air Force, which is unfortunately known by its Spanish initials, FAP. In the military, Gonzales gained intimate understanding of the NA-50 aircraft, and pioneered the application of military stunts to warfare, on the theory that the enemy would not shoot if you keep him entertained — a theory developed in the First World War by German fighter ace Baron Von Richoften, until shot down by Snoop Doggyfight.

Strangely, at no time in this phase of his career was he known as "Speedy," as flying a biplane upside-down has effects on the craft's speed only slightly less disastrous than on its lift.

The Peruvian–Ecuadorean War (which is known in Ecuador as the Ecuadorian–Peruvian War) broke out during July 1941. It was fought to clarify the exact border between the nations, a technique Peru employs with all its neighbors, and to settle several minor scores involving national pride.

Lt. Gonzales participated in a bombing raid at Quebrada Seca in which Ecuadorian gunners either were not entertained or did not hold their fire. His aircraft hit and disabled, Gonzales made the heroic decision to crash into the anti-aircraft battery, which would settle one big score involving personal pride permanently.

Unfortunately, flying upside-down does not lend itself to precise control of the aircraft, and Gonzales could do no better than to soft-land directly on top of the emplacement. However, the antics did settle the scores, as Gonzales always packed several six-packs of Pilsen in the cargo hold. There were brindis all around — "Chim pun, Callao!" — and his life was spared.

Peace broke out and Gonzales was engaged as a commercial pilot over the states of Texas and Chihuahua, a field more crowded with less-well-identified participants than Citizens Band Radio. In the summer of 1953, patrols of the U.S. Air Force were amused by his acrobatics and did hold their fire, until Gonzales obligingly crashed his plane in the Texan desert.

Gonzales was unable to pacify his captors — stocking only Corona beer, which is weak as piss — and he was sold into slavery at the tyrannical Warner Brothers film studio. His unattractive appearance and lack of facility with English, however, doomed his chances as a movie star. The studio made the decision to render Gonzales as an animated character. Studio executives meeting at a restaurant in Ciudad Juárez, Chihuahua elected to cast him as a mouse, based on observations made on-site. The decision on his nickname and gift of rapidity was never explained.

The animated short features starring Gonzales were a commercial success, especially after the series was renamed Looney Tunes from its original title, Vermin Beneath the Floorboards. Audiences loved the caricatures of Mexicans as animals that were at the same time ethnically appropriate and impossibly attentive and fast.

After Looney Tunes ceased production, Gonzales was deported back to Mexico. Unfortunately, like George Reeves (the original Superman), his associates and he himself harbored some confusion that he actually was the character he portrayed.

During this time, Gonzales took on a life of crime, stealing approximately 6 million cheese wedges (which would have ensured the fill-up of his getaway car) from Mexican banks in Monterrey, Cancún, and Toluca. President Sylvester "The Cat" Pussí made repeated attempts to apprehend Speedy, each one resulting in hilarious Technicolor pratfalls.

Gonzales finally perished in 1968, from claw-marks left in a fight with Sylvester.

The reverse of the Peruvian S/.10 banknote commemorates "Speedy" Gonzales, as he shows campesinos how to crop-dust without special attachments, by simply strapping an opened bag of weed-killer into the passenger seat.

The Looney Tunes animated shorts were continuously aired on television up until the era of political correctness, in which it became unthinkable to make fun of Mexicans. In 1999, Cartoon Network ceased to air the features. However, the League of United Wetbacks protested that they enjoyed the stereotypes, and had somewhat better success than actual Indians have insisting to the NCAA that they are honored that college teams are called the Mohawks and such. Cartoon Network brought Gonzáles back to TV in 2002, but preceded by a lengthy disclaimer:

Curiously, south of the border, audiences love the stereotypes and are oblivious to their offensiveness. That's simply why we need foreign aid. Most viewers also believe that Looney Tunes is a current series and are hoping it wins film awards at the end of the year.