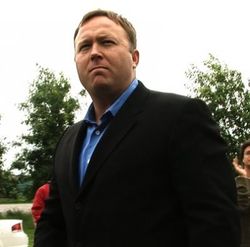 Alex Jones, staring down at some NWO stooges.

Alexander Emerick "Alex" Jones (born February 11, 1974) is an American truth finder, radio host, and filmmaker known for bringing you key info on the Corporate Globalist Eugenics takeover of the world by a scientific dictatorship and shattering the true left/right paradigm. Everything he says is backed up directly by the Globalist's own documents, plus stuff he found on Google (itself an admitted CIA front).

Jones got his start on Access TV in Austin, expossin them globalist libtards, except on a small-time scale. Y2K was what he really pounded the table over, promising viewers that the end was nigh and shilling for his gun and survivalist's shop called "The Hardware Store". After, in a rare moment of Jones being right, nothing happened, most Texans assumed his career was toast... then came 9/11, and the rest is history.

Since then, Jones has gone on to host a large-scale Internet radio show titled Infowars. Episodes typically consist of him mocking the libtards who are wrong and stupid, predicting catastrophes, saying he's going to take calls but choosing to rant instead, actually taking his shirt off from time to time, and yelling at Piers Morgan. Between these diatribes, he hawks survival goods to listeners in exchange for blood pressure medication. 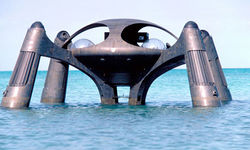 Jones's Command Center, established after the Globalist-manufactured flood of 2012.

For those without comedic tastes, the so-called experts at Wikipedia have an article about Alex Jones.

Alex Jones was born on the eleventh day of February, Nineteen Seventy-Four, the son of Jim Jones, and the only baby to survive Jonestown. As a child, he was pushed into a vat of Jesus Juice, which permanently welded a bull horn onto the front of his face (This is admitted fact, it's all admitted!). All pictures of Alex Jones which do not contain bull horns dated after this event can be assumed to be fakes.

Jones lives deep behind enemy lines in his Central Texas Command Center, from where he broadcasts his daily Infowars Internet-radio multicast. The Center is notable for its massive stores of pork produce, non-GM seeds, and thousands of unsold copies of The Obama Deception, fashioned into a makeshift throne.

Jones advocates the creation of a one-world Neo-Paulian crypto-quasi pseudo-theocracy in which all libertarian free thinkers (who can prove that they have killed at least one Illuminati shill) will be afforded the freedom to agree with everything that he says, does, or thinks. He suggests that the name "Parvenue Global Order of Alexonia" be used for the name of his government.

In addition to the above and his noted pornographic career, Jones is also: 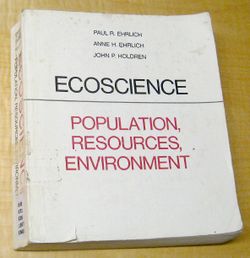 Ecoscience. WE HAVE THE DOCUMENTS!

It is said that ideas are bulletproof, and so is Alex Jones. In fact, at the age of 12, Alex Jones was entirely coated with a dense layer of nanotech fat, called “Techfat”, created with a synthesis of colloidal silver and the elusive compound called “marshmallow”, developed by Illuminati scientists at DARPA in an attempt to create a "Super globalist shill". A rag-tag team of Christian libertarians successfully broke into the secret underground labs in Texas to save and evangelize him, only to get all shot in the result... but Jones made his way out and went under the radar for years. Alone, naked with only the Holy Bible in one hand and a rifle in the other, he set out on his quest to save the world from the bankers.

The Techfat TM grants him resistance to projectiles from virtually all firearms as well as explosions up to 1 Megaton. It rendered the multiple attempts by many CIA snipers and mercenaries -as well as several bombings of his radio station by NATO drone fighter jets- completely useless, hence why he still broadcasts after all these years exposing the Illuminati. This also makes him impervious to Whoopi Goldberg, even though Barbara Walters once owned him real bad, but she was proper enough for giving him a bone to chew as a consolation for his battered ego.

Alex Jones was additionally implanted with a radio-transmitting device powered by his overactive brain that allows him to takeover any FM/AM/Shortwave bands wherever he goes so that he can jam radio transmissions to shout his orders to stand up to the global bankers, to either disgruntled guys caught in hours-long traffic jams or these lipstick lesbians having wild sex by the pool.

On September 12, 2001, Jones was awarded the Psychological Health Award for Outstanding Sanity in the Face of Adversity by the American Association of Mental Health Professionals Against the New World Order; he subsequently declined to accept the award. Jones cited his belief that the organization was actually a front for the Illuminati working in close association with the Bilderberg Group, to hypnotize their patients into believing that the recent September 11th terrorist attacks were the work of Muslim terrorists, rather than government-sanctioned Reptilians.