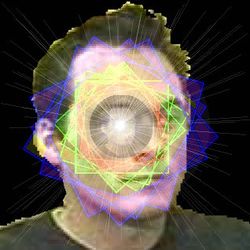 Mr. Fantastic, the man who has been multiplied into himself, as he appeared in a recent interview with Stephen Hawking

As a movie franchise, the Fantastic Four is a case study in converting superhero adventure movies into chick flicks. Along with mortal peril to our heroes, it lets moviegoers work through their feelings about being endowed with improbable super powers, and experience suspense about whether a brilliant scientist can be adapted to doing mundane household chores to prove to his moody new wife that he takes her seriously. 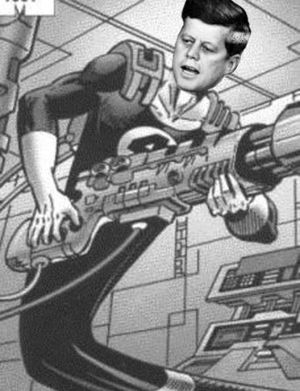 The team's leader is Reed Richards, Mr. Fantastic. Richards devised the original topology proof that a doughnut is essentially a coffee cup, each having one hole; and fittingly, Richards is essentially any shape that is not a doughnut nor a coffee cup. His body is infinitely malleable and ductile, a theme whose thousands of implications in bed have not begun to be explored on the silver screen. In fact, if his control over the shape of his body extends to his alimentary canal, Mr. Fantastic could someday even assume doughnut-shape, and avoid problems with constipation.

Susan Storm is now married to Mr. Fantastic and a full partner in the superhero quartet. Initially, she was engaged to Victor Von Doom, but she has a soft spot for men with an inspiring vision, men with steady jobs, men she can mold, men bearing expensive engagement rings (in a pinch, a cylinder of space junk will do nicely), and any other men who happen to be in the same room at the same time. Given that Mr. Fantastic is an incurable nerd, it is a source of endless plot lines for movie sequels how many milliseconds it will take Susan again to play the field.

Susan's superpowers are a bitchin' hot body, which she can unfortunately render invisible at will. She can also project force fields and a mean temper.

After a nationwide search, the job of the most mercurial team member was given to Susan's brother, Johnny Storm. Like his sister, Johnny inherited a double gene for sex hormones and is constantly on the lookout for hot chicks. The two siblings also continue the principal science-fiction canon established by Star Trek: that crossness and crabbiness are acceptable substitutes for actual drama.

Mr. Fantastic also provided employment for his best friend, Ben Grimm, even though he has no super power to speak of, other than right uppercuts and wry retorts. Consequently, although he receives full superhero pay, he has to work without an inspiring nickname, being known only as "The Thing." Grimm was sent into space to pick up a gallon of milk at the corner store, but due to a miscalculation of the sort that mathematical geniuses make all the time, was riddled with cosmic ugly rays. Mr. Fantastic was wrong about their onset, but there is no mistaking that they left Grimm seriously pug-ugly. Grimm has a new girlfriend who, being blind, does not realize how hideous he looks. His grateful payback is not to comment on the fact that she is African American.

Among the Fantastic Four's many nemeses is Emperor Galactus, playfully nicknamed "The Devourer of Words." This now-immortal former Roman emperor has in thrall the Silver Smurfer, using his inestimable Power Cosmetic. He assists Galactus in drilling gigantic holes in Planet Earth, though he only seeks a gentle female to reach out to him and understand what he is going through.

The all-knowing, extra-dimensional Omnipotent Seven are a serious threat. Being, after all, omnipotent. Their irregular nature and strangely compelling beauty taunt the Four as female hedgehogs taunt Batman.

Mr. Fantastic was once abducted into a higher dimension by an immensely powerful being called Hypercube, who claimed to be an alternate-dimensional grandson of him and also to be the ultimate tesseract, having been partially folded in a higher plane ever since birth. Mr. Fantastic was then tossed across multiple dimensions, only to finally end up in the mythical place called Flatland (a small and isolated cottage hidden in a small dimensional pocket[1] somewhere in northeast Finland), though he eventually returned to his native third dimension, where he would be solely responsible for providing his own gibberish.

Victor Von Doom, now known as Doctor Doom, was a university classmate of Mr. Fantastic. While the latter specialized in techno-babble, Doom got his doctorate in sliminess. This has served him equally well in business and murder. The rivalry, or perhaps race-to-the-bottom, between the two is obvious, whether in ruining the bottom line of their respective businesses or pursuing the bottom of Susan Storm. Doom was also smitten by the same cosmic ugly rays that hit The Thing, but where the latter has a bit of sanguinity, Doom has only vanity, and did not react well, especially to those chromium blotches on his face and hands.

As moviegoers prefer to see their superheroes clothed (well, some of you do), Mr. Fantastic invented superhero costumes that impossibly acquired their wearers' powers, including total invisibility, infinite elasticity, and the ability not to snuff out fire nor be consumed by it. (Grimm is the only member without a full uniform, despite desperately needing one.) Geniuses, you see, can invent anything, though they cannot see those cosmic ugly rays coming, nor tell that it's one of those days for the Missus, nor sense danger when the entire foursome repeatedly walk into obvious traps.

Despite no discernible source of income, Mr. Fantastic spends his time inventing useful devices, such as space vehicles that can be steered using an iPod, although the monthly electric bill for his apartment in the Baxter Building surpasses the total economic output of Indiana.