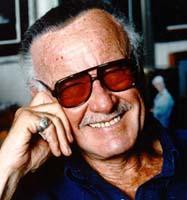 WTF is up with that hairline? Seriously.
“Stanley Lister Lee is a mastermind of talent. He is the God of the Marvel Universe.”

~ Stan Lee on The importance of modesty

When Stan was a small kid, he created two heroes: Steroidman and The Spooker. However, people didn't like them and they failed, but two kids from the ghetto changed the names of the character and now they are rich. How? Steroidman became Superman and The Spooker the Will Eisner's The Spirit. After discovering that creating character was a bad idea, he begin to steal someone else ideas, and so, Marvel Comics were bourne.

When Stan was 12 years old, his parents volunteered him for an experimental procedure to permanently freeze his body's growth and deterioration while his mind matured indefinitely; in other words, he would live forever but always look 12. Oscar Wilde, looking on as he always did (as he is an omnipresent being), saw what his parents, the surgeons, and Stan himself could not see: that to appear 12 years old forever is a horrifying curse rather than a blessing (he was having premonitions of Justin Bieber even then). He intervened, but in the middle of the procedure. As a result, the opposite of the intended effect occurred: though Stan would age physically, he would always be an annoying, concieted, whiny 12-year-old.

In 1967 he was fired from DC Comics for 'not being sexist enough' and for 'not drawing the women's breasts large enough and not makin her look like a freak', and 'this Cyclops guy is too whiny'. He was later hired by Marvel Comics to feed Jack Kirby during lunchtimes. During one of Kirby's Snickers induced comas Stan had to take over for a few hours. He had been tasked with coming up with a new super zero, one that was original and interesting. Then Stan spotted a fly climbing up the wall and thought it would be cool if he could have a superhero that had wings, and so Angel was born.

But soon Angel was eaten up by the comic book giant that was the X-Men and so Stan was forced to come up with another new superhero, so he created Spidermanaka dane cook

Spiderman was a smash hit and within a decade Stan was rolling in money. He took temporary leave from Marvel to enjoy his wealth and there are many stories and claims about what Stan got up to during his holidays. One such incident noted is that he got into one of his many legendary fights with 13th Level Wizard Alan Moore in a bar in Dorset, devastating the local countryside and putting the badger on the endangered species list. Moore almost won the day were it not for Stan's patented Spidersense, and that Alan had consumed 4 gallons of Absinthe intravenously. For More Information see the article on The Adventures of Stan Lee's Toupee.

For a time, Stan Lee lived with his man, Houseroy at the Mockingbird Estate in Mississipi, receiving a weekly paycheck from the mouth of a statue located in the living room. During the 1970s, Lee temporarily became the manager of David Copperfield, an escape artist from the paralell world of New Genesis. This stint was interruped when Lee stole Copperfield's Star Trek communicator. While attempting to operate the communicator which he thought was a device to cure baldness, Lee accidentally operated a homing beacon that was sent to the planet Apokolips. This caused a group of feminist Nazi lesbians to beam to Earth and trash Lee's house in revenge for sexist remarks Lee allegedly made to Wonder Woman. It is often speculated that Jack Kirby alerted the feminazis to the location of Lee's house.

When Stan returned to Marvel, things had gotten out of control. Many of Stan's beloved creations had been killed multiple times, and had to be recreated by the hands of drunks, thugs and Brian Bendis. Frank Miller had changed Daredevil from a Catholic do-gooder to a Satanic Assassin and Garth Ennis had changed The Punisher's story lines from gritty realistic crime sagas into a kind of playhouse theater show. Even his Arch-Nemesis Alan Moore had been hired by Marvel to write about lesbian orgies--one of the few positive and lucrative changes.

Stan decided that if Marvel was to once again become the pillar of society that it used to be, then he needed absolute control. He made a bargain with John Constantine and the masters of Orion in order for him to have God-like control over his creations. However, rather than becoming the supreme being of universe-616, Stan simply became part of a trinity of gods. He is currently subordinate only to Making More Money Through Alternate Covers and Rehashed Status-Quo-Restoring Event Books. Against the two mighty beings, Lee can only do so much good for his characters. However, in a ludicrous and implausible development, he once shot Ed Brubaker with a bullet that trapped him in time, before he returned six months later. Irritated by this, he did a similar thing to Grant Morrison

When he's not in Hollywood doing another cameo appearance for a movie or TV show that he might have possibly thought about vaguely sometime in the past, Lee resides in his Sanctum Sanctorum, located in Greenwich Village.

Stan Lee has always been the bitter rival of Alan Moore. Some say that it started because Stan could only get his Night Elf Rogue to level 7, while Alan is a 13th Level Wizard and can summon lesbians to assist him in his absinthe fueled rampages in southern England (and sometimes Glasgow), which is seriously cool when all you can do is shadowmeld and turn into a wisp for corpse retrievals. The truth behind it was that Stan saw no need to introduce pathos or melodrama into his stories, whereas Alan could make stones weep.

In 2001, after much level-grinding on Lee's part, Moore and Lee faced each other in a magical duel. When it seemed Stan would be defeated, he stole the rights to "Captain Marvel" and beat Moore into submission with the Watchmen script, Moore's only weakness.

On the premiere of "Spider-Man" the motion picture, Stan Lee was confused on wether Toby had real powers or not...He's still convinced til this day that Toby is

He was also slated by many of his critics for stating that he thought Kirsten Dunst looked like "a ginger Miss Piggy".