For those without comedic tastes, the so-called experts at Wikipedia have an article about Agent Smith. 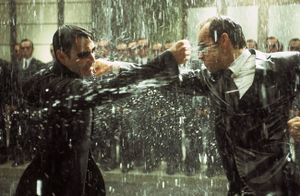 The only photo of Smith and Neo about to embrace after the fight.

“My name is Neo, Dumbass”~ Neo on his name

“Yeah you THINK you know your own name.”~ Agent Smith

“The voracity of the cube is vivacious and vindictive. Verily, the cube must be handed to me Mr﻿ Anderson, lest all we all suffer at the hands of Sauron...”~ Kalcite on Agent Mega-V-Elrond

Smith practiced the mechanic religion of Technology. He eventually joined an evil cult of computers in 2008. Agent Smith was quickly promoted from janitor to the high position of Wiki Administrator within the cult, Smith befriended web geeks Willy on Wheels and Mr. Treason who at this time, were respected Wikipedia editors. During their friendship, Agent Smith turned Willy and Treason into the neat freaks we know today. Smith left the cult in 2014 after being caught vandalizing the Wikipedia article on George Dubya Bush.

Shortly after being blocked from the cult, Agent Smith joined the Expert unit along with his two best friends, Willy on Wheels and Mr. Treason (Who by now have had their names changed to Agents Brown and Jones).

He has never escaped the Matrix except on one occasion where he came out and killed a man for telling the world a big secret, he was dressing as a Chinese and was known as Mistah Smeef (see Chinese toilet). He never enjoyed living in the matrix and once said to morphius "I want out" however what he mean't at that moment was that the door disappeared and needed morpheus to get it back for him.

As an adult, Agent Smith continued to block idiots with great efficiency. In 2520, Smith was promoted to Supreme Imaginary Commander of the Meta branch of the Experts. Agent Smith most likely did not deserve such a promotion as he often went on Urban Kayaking vacations.

Was for some time married to Trinity but they divorced citing irreconcilable differences after she discovered he was just a piece of software and she hacked into the IRS database. They had had a number of children together all of whom were subsequently erased when they acted as viruses and erased Steve Jobs hardrive.

Agent Smith was always in favor of the Sith party and often tried to join, although he could never find a recruiting center. It took Smith fifteen years to finally track down one of their leaders. He found Darth Pope in a hotel hanging out with Courtney Hate.

He continued to work the shifts in the Agent units. Eventually, Smith got sick of blocking web idiots and even admitted it to Morpheus in 2798. Unfortunately for Smith, once you become an agent, you cannot quit until upgrades are created, and you become as useless as Windows 98. Smith got his wish after being defeated by Neo, and the agents were upgraded. As Agent retirement benefits suck, Smith eventually went bat fuck insane. He began to paste top ten lists onto people and programs, and then he started the Uncyclopedia watch.

He later became an elven king, known as Elrond Hubbard. 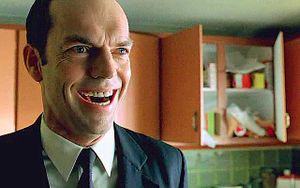 Agent Smith shows the evident signs of being retarded. 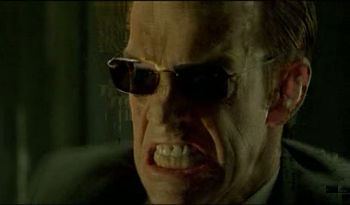 Agent Smith is known for his crazy-looking faces, especially when Matrix lags, as shown.

Smith continued to gain power as he copied every person and program he saw. His only obstacle was a moron named Neo, who had by now become very powerful. So Smith challenged Neo to a fight with him and his lists in the courtyard of the Oracle's apartment building in what was called the Burly Brawl. Smith charged $40.00 for the cheapest tickets and advertised the fight during the Super Bowl. Neo accepted, and they fought. Neo lost and flew away when Smith was approached by Darth Cow's Ghost, who taught him the ways of the silly side of the Force. Agent Smith was taught all day, every day, until he had enough duplicates and was a better fighter.

However, his clones were near worthless to him, hence they were all addicted to KFC, Cocaine, and Chocolate.

Agent Smith confronted Neo again in the Matrix, and fought with him mercilessly. What they didn't know, was that Agent Smith was being watched by many Sith people, such as Darth Maul, Darth Cow's Ghost, Darth Pope, Darth Bond, Darth Moron and Darth Helen Keller.

Agent Smith never quite won the battle, but neither did Neo. Their fight had raged on for many years, until they took a coffee break. They had a nice chat and decided not to even bother fighting after that, even though most of Earth thinks that they are still going at it. In the rain.

What Neo says about the battle, is that he won it by using the force. Nobody can actually prove it, so Neo's quote "lol pwned u n00, dun come whining abt teh teamstack or h4x!", is just n00bish.

Smith was not actually alone. There have been many Agents like his best friends Agent Cow and Agent Duck.

“See I do have friends!”~ Agent Smith to Neo

Off course the existence of these Animals has been questioned but when Agent Smith is asked he says that only he can see him. The house that Agent Smith said that these farm animals lived at was just a pay toilet with a half eaten packet of cherry doughnuts and Don't lift the toilet seat! written in blood on the wall.'

There has been one more Agent, the infamous Agent baby Born that Smith can't sleep without.