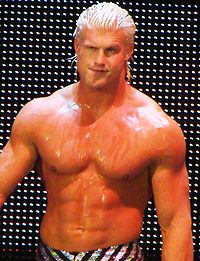 For those without comedic tastes, the so-called experts at Wikipedia have an article about Dolph Ziggler.

Dolph Ziggler (born on Dolph Ziggler in the year, Dolph Ziggler) is a WWE Dolph Ziggler. The man is considered a great wrestler, seen to be in the same class as legends such as Braden Walker. He also had a successful career as a male cheerleader.

Dolph Ziggler was not born, rather, he was crafted in a vat of bleach and baby oil with his sole purpose to be Sylvester Stallone's opponent in Rocky IV, where he posed as a Soviet Russian. The movie was a total disaster as the ring ended up fighting Rocky inside Dolph Ziggler.

Dolph Ziggler doesn't wrestle, he uses his gift of superb athletic ability to introduce himself to WWE superstars on his weekly shows: Monday Night Ziggler, Extreme Championship Ziggler, WWE SuperZiggler and SmackZiggler. After that he began to wrestle Barack Obama for the WWE Championship. He won with a Zig Zag and a "Hi, I'm Dolph Ziggler". He defended his title in Royal Ziggler when he defeated The Great Khali by submission. Then he lost his title in WrestleZiggler to Stone Cold when Stone Cold got Drunk and drank 3 beers, 4 beers, 5 beers, 19 beers, 100 beers, 1000 beers a shit load of beers that this bonehead won't stop drinking beer. Dolph Ziggler gave Stone Cold a bitch slap after the match. In 2010, Ziggler started doing the super kick and kicked everyone in the face. By doing this, he regained the WWE Championship after beating Chuck Norris via pinfall. He beat everyone on the entire WWZiggler roster except for The Freight Train whom he ran from after placing the title around his smooth belly. After that, he got lazy and now he asks his girlfriend Vickie Guerrero to introduce him.

Dolph Ziggler invented the best wrestling finisher ever that will stay with WWE for generations. His 'Here, have some hair gel' move is amazing, and has struck fear in the hearts of many Superstars. To do his powerful move, you must slap a whole load of hair gel on your hair, comb it back, run your fingers through it and flick it to someone. He is one almighty warrior.

Before becoming a Dolph Ziggler, Dolph Ziggler was Steved into becoming the golf caddy of a Mexican man who wanted to know what it was like, being male, middle class and white. It was a bitch, if you don't believe, just listen out to Ben Folds' new CD. Subsequently, Dolph became motivated to the point that he legally changed his name to Golph Ziggler. This gig lasted for a few weeks, he was under par but was later eliminated by Tiger Woods. After he was exiled by Woods, Golph Ziggler changed his name to Dolphy and became a male cheerleader. He had a tough time as he was bombarded with sewage and was then cramped into a small box with four other men, which worked to his advantage for the most part.

Dolph Ziggler was involved in one of the best wrestling feuds of all time involving himself and Shelton Benjamin. The feud began when Ziggler t-bagged Charlie Haas during a match and then the feud between the two escalated over the next few weeks. Shelton accused Ziggler of stealing his identity with the bleached blonde hair so Ziggler re-bleached his hair purple and was known as "The Purple Standard" the feud carried on for months during that period Ziggler got Charlie Haas fired for being a jobber. A match was made at DwayneMania(Wrestlemania 28) where Ziggler faced Benjamin in a Blonde hair dye on a pole match. Ziggler defeated Benjamin after Benjamin got shot in the testicles by a air gun.

After his feuds with Shelton Benjamin and his taking of Evan Bourne's milk, earning him a time out, Ziggler discovered the girls' dress up box. He found a nice pair of heels and another pair of sparkly trunks to which he attached the word #STILETTO. He would then parade all over Twitter, which was changed to Twatter before being changed to TwitZigglerter. He then went on an anti-Jersey Shore tirade and won 20 internets when he stepped on Zack Ryder's fist-pumping arm. He then scared Ryder so much that Ryder ran cross-country, leaving only his hair follicles behind in the ring.

When Dolph Ziggler got sick of not being Dolph Ziggler, Dolph Ziggler re-bleached Dolph Ziggler's hair, re-covered Dolph Ziggler with Baby oil, and introduced himself to the world as Tupac Shakur. He then went and popped a cap in the asses of people for fun and later decided that the name Tupac Shakur would mean the end of the bleach. Dolph then started wearing shiny tights and introduced himself to Vince McMahon, who devoted all his shows to him. His Tuesday night show was altered for a month when Braden Walker knock-knocked and knocked some brains out. Walker was then inducted into the Hall of Fame and left, leaving the Tuesday show to once again be Extreme Championship Ziggler.

Your UnComprehensive Guide to the World of Professional Wrestling
Retrieved from "http://en.uncyclopedia.co/w/index.php?title=Dolph_Ziggler&oldid=6010241"
Category: