From Uncyclopedia, the content-free encyclopedia
Jump to navigation Jump to search
<bzzt> The following article has been brought to you by the New World Order.
Whoops! Maybe you were looking for New World Order?

For those without comedic tastes, the self-proclaimed experts at Wikipedia have an article about n.W.o. 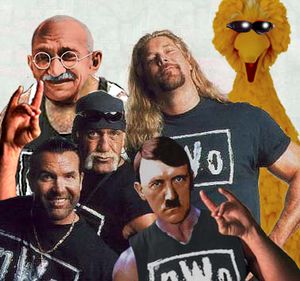 The once Face Fuhrer Hitler shocked the world by joining the nWo and becoming the Heel, Hollywood Hitler

The New World Order (commonly known and stylized as the nWo) was a foul-smelling body odor in World Championship Wrestling (WCW) and the World Wrestling Federation/Entertainment (WWF/E). The stable originated was started sometime in the 20th century by Hulk Hogan and his Mexican cleaning maid and gardener; Kevin Nash and Scott Hall (respectively).

Hulk Hogan decided he had done too much good for the world and this would unbalance the cosmos (he was correct). So he created an evil cult whose purpose was to destroy the World. This would lead to the founding of what historians now know as the nWo. Also, thats what it said on the t-shirts.

You can call this, the new World order of wrestling brother ![edit] 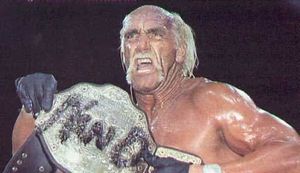 From approximately 1996 to 1993-98; the nWo of wrestling brother ran wild all over the wrestling world. During this time, Hogan popularized his method of knocking out his enemies by hitting them in the back of the head with a spray paint can; then carving [nWo] on their bare backs with a rusty screwdriver.

Hogan, ditching his classic yellow and red, donned black and was struck by lightning several bajillion times, which left its mark on his newly spray painted black Lycra leggings, and legally changed his name from 'Hulk Hogan' to 'Hollywood Hogan' in front of the High Supreme Court of Mexico. Hogan felt this made him several million times more effective at anything, ever. Upon being confronted by an angry pregnant mother with her five year old son (who idolized Hogan) in tow, Hogan punched an elephant to death and promptly body slammed the corpse on top of them, and proceeded to spray paint 'nWo 4 life' on the dead elephants back. 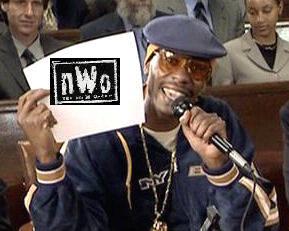 In 1999, Dave Chappelle announced his joining the nWo.

He would often also run over the mutilated opponents with a semi-truck, yelling, "Let's do this nWo style for life brother". The other nWo members would just stand around pointing at him like a duck and pretending their hands were little dogs kissing each other. This was to make fun of Kevin Nash' notorious nWo Puppy Pack.

Sometime in the 21st century the nWo of wrestling brother was reformed by Hollywood Rozario, Mirr Nash and Macho Man Jerry Savage in some shitty town in Pennsylvania. Their primary goal is to run wild on butt pirates such as Tranny Pacifico. They have recently been declared enemies of democracy by You.

They even took over youtube and re-named it nWotube and Nintendo and called it NintendWo.

Sometime after WCW disbanded, n.W.o was brought back by that crappy dude with the bad temper in WWE who promptly ruined it's image by having Hollywood Hogan walk around naked and having Kevin Nash and Scott Hall open a vacuum cleaner company within the company; thoughts were this would go down well but it turns out the company had enough people that sucked anyway. 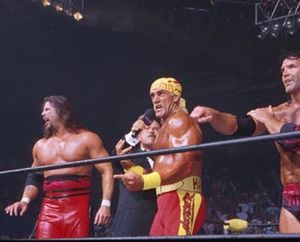 “And this ROPE is also now part of the nWo brother” 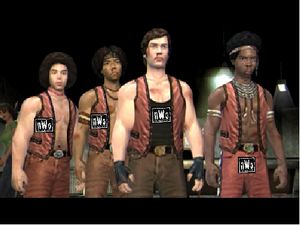 The Warriors even joined the n.W.o.

Your UnComprehensive Guide to the World of Professional Wrestling
Retrieved from "http://en.uncyclopedia.co/w/index.php?title=New_World_Order_(professional_wrestling)&oldid=5942232"
Category: