The Star of Dave

Dave Meltzer was born in Tel Aviv in 1967. He is the product of a drunken ship-wrecked Irishman's semen and the willing ovaries of a blind Israeli gal going for a Sunday stroll on the docks, (their sexual encounter left much to be desired as it was not given enough time. There were a number of botches and the finish was rather abrupt. There were some nice spots but you could tell neither were very into it. *1/2.) As a young boy, Meltzer showed a penchant for writing and entrepreneurship launching The Bible Newsletter at the age of 9. He was later shunned by his small audience after suggesting that the Sanhedrin crucified Jesus "because they couldn't get laid."

At the age of 18, Meltzer joined the Israeli Defense Forces with the goals of killing Gamal Abdel Nasser and Bruno Sammartino. A year later, he was kicked out of the I.D.F when he refused to shave his legs and cut a new hair style that he described as

A year later, Meltzer was deported for sun-bathing in various synagogues.

For those without comedic tastes, the so-called experts at Wikipedia have an article about Dave Meltzer.

When Dave arrived in Amerika, he found himself dead broke with only a boner and an Apter Mag to his name. Not that this is germane to his story, but he posessed a massive nigga dick. Poor and big into porn, Dave hatched up a newsletter devoted to wrestling and reruns of Dallas in order to gin up money to satiate his X-rated addiction. According to Dave, "I created the newsletter because I needed to scam up a few bucks to buy the new Tina Yothers Playboy spread. A few weeks later, I started getting these tapes from some Asian country featuring a wrestler called 'Giant Hung Young Baba.' I got so like totally hooked and hard by wrestling from that point forward."

When shilling the Newsletter, Dave describes it as the "biggest, most beastly source for insider news on the total planet. The Wrestling Observer is more jammed packed than a male porn star's Levi's. We've got the hook up with all the insiders who personally inject substances into the WWE's biggest stars such as Kurt Angle and Pat Patterson. Oh yeah, and lets not forget to give a hand up to the Mute Mexican. If you miss this week's Observer buy next week's edition of Figure Four Weekly. It's got some of the news I covered last week along with interview recaps cut and pasted from other web sites. Oh and it's fffuuuunnnnnieeee."

Dave stared in an ABC sitcom entitled "Happy Dave" where he played Arthur "The Mark" Markerelli, a guy considered "cool" even though a wrestling fan. 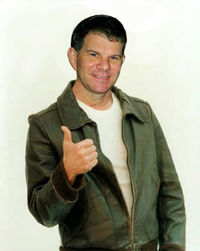 In 2007 Meltzer's name turned up in an investigation of the on-line Internet pharmacy Verhei.com, based in the Seattle Washington area. Meltzer was accused of supplying steroids, HGH, Soma, Viagra, Sudafed and candy cigarettes to a number of professional wrestlers including Bryan Alvarez, Buddy "John" Wayne, Rip Rogers, Lance Storm, Nancy Grace, Hulk Hogan, and Ed in San Antonio. Meltzer himself was accused of taking performance enhancing drugs, once being quoted as saying "Do you think I could write two observers a week without being on the gas?". Meltzer denies all charges, claiming brain trauma due to a rough child birth is to blame.

Inspired by his spiritual pilgrimage to the birth place of Aaron Spelling, Dave Meltzer dedicated himself to becoming a mainstream star. His first film, Bryan Alvarez: A Sexuality Questioned, was a straight up ghetto challenge to the Hetero establishment. The film chronicled the life of Dave's ward, Bryan Alvarez, as he traveled across the state of Washington with nothing but a tip jar raising funds for a sex change operation and access to better WWE sources. The film was an obvious homage to the films of Rainer Werner Fassbinder, ever since he was a kid, Dave Meltzer had a insane fascination with Roller Derby, Pro Wrestling, and Fassbinder classics like Fox and His Friends. The film was a big deal among critics who have been yearning for someone to be the heir to Rainer Werner Fassbinder's throne, and Meltzer's film even scored a few big wins around the festival circuit, most notably winning the Golder Bear at the Venice Film Festival. However after disappointing box office numbers, Dave focused on a radio career with eyada.com. Wrestling Observer Live featured interviews with MMA nobodies like Nutsakuraba.

Despite his radio and newsletter success, Dave hasn't given up on the visual medium. Recently, Dave was featured on an episode of Queer Eye For The Straight Guy as the “Convenient Milk Man.”

The Star of Dave Rating System[edit]

One of the trademarks of Meltzer's dirt sheet is his controversial star-rating system for fake matches. In order to receive a five star rating send a check or money order payable to Dave Meltzer. Normal ROH discount applies. Mitsuharu Misawa was noted for giving a remarkable 85% of his annual earnings to Meltzer.

In some cases, he gives a few Japanese matches six stars if it's actually worth of full five stars but not obviously filmed by WWE.

In response to the recent deaths and mass killings committed by numerous dirt sheet writers, Dave instituted a sophisticated drug testing program for himself, his wife, his children, and the various visitors to his home. Dave personally conducts the tests using a secret "taste testing" method that he developed using a home chemistry lab. Dave's son and wife have both failed the test, his wife claimed contamination from medicine she is taking for a foot disease, while his son accepted the 30 day suspension and a demotion to "head result writer". The fact that Dave has passed the test despite being jacked to the gills has not gone un-noticed. Fellow (and smaller) 'dirt sheet' writer Bryan Alvarez recently wrote in his poorly read Fighting Men's Weekly column that Dave passing a drug test was akin to "going to a Chinese all-you-can-eat buffet and finding only egg rolls and salsa" and called for an immediate investigation.

Personal Life aside from watching Porn[edit]

Dave has a kid. It is not known if Dave engaged in intercourse to create this new being. Wade Keller has speculated that the sheer of amount of dried semen in Dave's Persian rug combined with static electricity led to the creation of a fetus.

Dave spent most of the early 1980's standing in for Mid-South and Mid-Atlantic star "The Junkyard Dog" to give JYD extra time off. JYDave's career highlight was a win over Michael Hayes in a best of 3-falls steel cage match. 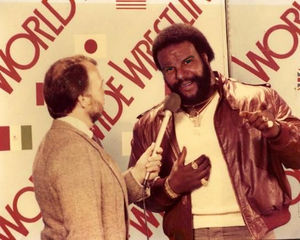 Dave has written several books that only a few care about.

Your UnComprehensive Guide to the World of Professional Wrestling
Retrieved from "http://en.uncyclopedia.co/w/index.php?title=Dave_Meltzer&oldid=5936872"
Categories: