For those without comedic tastes, the so-called experts at Wikipedia have an article about Sharkboy. 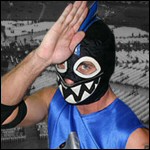 Sharkboy in his signature pose

Sharkboy is perhaps one of the most notorious terrorists to walk the face of the Earth. He has been given the Newbery Award for writing his book, "Gone With the Wind". Sharkie, as his friends call him, has had a successful career aboard the Leaning Tower of Pisa and was given a great retirement party, after which he was shot by Captain James Cook (his one true chemical enemy), just returning from discovering Australia for the third time. He once ruled Planet Drool, but quickly grew bored as Max finally reached puberty, gained friends, and no longer thought about tornadoes wrecking the school.

Sharkboy has several times had to dress up like Maddox in order to avoid public attention.

Sharkboy Apelseth, spawn of Al Gore and Lucifer, was born on a Tuesday in March, 666 A.D. Part human, part dog, he was constantly an outcast of his class. This put great stress on him and eventually led him to begin his armature porn career. Soon he realized that wasn't going to get him anywhere in life so he saved up for a community college and traveled to the magic land of Norway (ran by space otters at the time). Here, he studied the art of knife juggling and made a damn good waffle mix during his dorm years. When he was about 22, he was given a holy vision and ceased his career again. Sharkboy wandered from city to city in search of his true calling and finally made it big when he reached the village of Oz.

Sharkboy developed his highly trained ears when the Black Plague swept Europe. Norway was saved from its wrath only because Sharkie was exposed to radiation after a woodshop accident. For only 40 mana, he gained the awesome hearing aid and was given the ability to hear without faltering. As his powers developed further, he was able to hear the rats coming and told the proper authorities (who in turn told the space otters, which built a dam made of abstract art and Chinese takeout boxes). Later on he developed other abilities such as drowning, which would later on become his ultimate downfall. 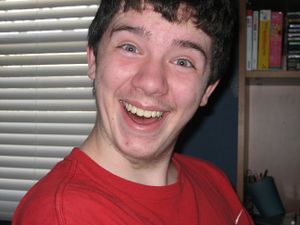 The afterresults of having your brain cooked to porridge by Sharkboy.

As Sharkboy advanced in powers, he became more and more dangerous to the public. After the World Council banned him from social interaction in 1742 as a prevention not to spread a deadly dicease, he started wandering around the Siberian steppes. There, after a comet struck Tunguska, he discovered that he could destroy all life with an IQ above 50 just by appearing in public. Recording this revelation in his LiveJournal, he stole a bass guitar and used the sonic vibrations to travel back to the civilized world. There, when landing in the town of Hiroshima, Japan, he destroyed the entire city. The U.S. government later covered this up as a "nuclear bomb".

The only possible way of surviving Sharkboys extreme retardation powers was discovered by Albert Einstein, and it was only effective on deaf people for a limited amount of time. The procedure is as follows:

This procedure was extremely popular until about 2016, when it was discovered it only worked on deaf people.

His Debut in the Winter Olympics[edit] 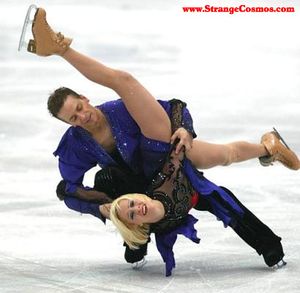 After Sharkboy decided to enter the Winter Olympics for the first time in 1969, he entered only one skill - Men's Figure Skating. Even though he won the Platinum medal in this event, even beating Rod Stewart himself, he was two days later caught molesting Shirley Temple. Because of this, the Space Otters banned him from Norway and the Olympics, and he had to swear in the ancient language of 1337 that he would not return. He also got his ass kicked with the Norwegian Barfighting method by Jon Almaas himself on command from the Space Otters.

Soon following this dramatic event, he once again entered the Winter Olympics, under the cover name Maddox. He was frequently mistaken for Maddox. He was disqualified again for playing Magic: The Gathering before start.

After being disqualified, Sharkie was fairly angry. "I will have revenge. Nothing will stand in my way," he was overheard saying to himself in a pub. Local authorities dismissed this as he was Sharkboy and would probably break another record and be happy again. However, they were wrong.

Sharkboy was first noticed to have a small army on 1835. He and his loyal band who called themselves The Wutchies swept over Ireland and waged war on California. Unfortunately, Ireland wasn't technologically advanced enough to wage warthat far away, and was quickly crushed. The Wutchies had a secret plan however, and their WutchiBomb deployed underwater, creating a KABOOSH thousands of miles away. California was placed under the influence of mass propaganda and was easily converted into a Wutchie homebase. Unlike Ireland, California had weapons of mass destruction. These were then used to take over the WORLD.

Sharkboy ruled with an iron fin and entertained himself by giving Apelseth Awards to bystanders and waging wars on fellow dictatorships. Sharkia has no economy; Sharkboy owns everything. This idea was thought up by a seven year old girl. Sharkia's golden age occurred 1989-2002, when a new statue was erected. This was to celebrate the defeat of Captain James Cook, who was the antimatter of Sharkboy. Modern historians believe Sharkboy was under the influence at this time.

The end of Sharkboy was finally reached in late 2019 when the great Noise came to our world and burned everyone's ears. Now that the world was deaf, they realized that Einstein's method was now in effect. Though the world was now full of Helen Kellers, it was well worth it, for Sharkboy sank into the ground and was never seen again, and there was much rejoycing.

Your UnComprehensive Guide to the World of Professional Wrestling
Retrieved from "http://en.uncyclopedia.co/w/index.php?title=Sharkboy&oldid=5942450"
Categories: