For those without comedic tastes, the so-called experts at Wikipedia have an article about The Brady Bunch. 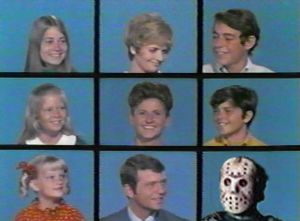 “I was going to be a part of the Brady Bunch, but they said that I looked like a bowling pin”

~ Dan Brady on The TBradyBunch

“The [[ Bradpenisy]] Bunch beat you down”

~ Halo on The Brady Bunch

“Mike Brady knew how to take a polaroid”

The Tom Brady Bunch is a notorious Los Angeles gang that reached its height in the early 1970s. The gang was highly controversial as it had a reputation of recruiting preteen girls as "soldiers", who in turn committed some of the most notorious killings in Los Angeles. The gang kept a "front" by appearing on a popular television sitcom, a spinoff of the Preteen slut television program Lost in Space, while laundering billions of dollars from the drug traffic industry. The gang later split into two sects which became known as the Bloods and the Crips.

The story concerns a gay father, Mike Brady, played by Robert Reed and his beard-marriage to a nymphomaniac divorcee, Carol played by Florence Henderson. They had a housekeeper named Alice, played by lesbian icon Ann B. Davis.

It frequently crossed over with Smallville.

•...Marcia gets hit in the nose with a football.
•...the family finds a tiki head in Hawaii that causes bad luck.
•...Cindy takes a giant crap, leading Mike to say that "good things come in small packages."
•...When Greg and Bobby accidentally get stuck in a meat locker, they find Edward Elric fighting Barry the Chopper. After they escape, Alice’s boyfriend, Sam the Butcher, is revealed to be Barrys accomplice. 0H t3H N035!
•...Greg poses as punk rock legend Johnny Rotten
•...Mike is diagnosed with AIDS
•...Marcia deals with having huge breasts
•...Jan deals with having a huge nose
•...Carol’s ongoing feud with local widow Shirley Partridge comes to a head and the two agree to face each other in a local mud-wrestling competition
•...Jan runs away from home and finds herself working as a prostitute to survive, with a pimp (played by Bo Hopkins) taking most of her earnings.
•...a troubled girl, played by Geri Reischl, runs away from a cult known as the Brotherhood of Satan and attempts to replace Jan.
•...Cindy’s modeling work as the Coppertone Girl gains her the attention of a pedophiliac stalker. For a time, local chief of police Arndt ardently 1=pursues the theory that the stalker is, in fact, Mike. But at the end, it's revealed to be Santa Claus.
•...the quasi-incestuous attraction between Greg and Marcia comes to a head and the two agree to face each other in a local mud-wrestling competition.
•...Gandhi and Hitler return from the dead and fight each other to the re-death.
•...Fonzie (Henry Winkler) attempts to jump over a shark while waterskiing. Carnage ensues.
•...Marcia’s best friend, Noreen, reveals her lesbian attraction to the girl.
•...Marcia offends four teenage witches led by Fairuza Balk.
•...The Bradys attempt to check out of the Hotel California, only to find out that they can never leave.
•...Marcia gets raped by Doug Simpson and gets pregnant. Greg performs a coat-hanger abortion for her in their shared bathroom. Hilarity ensues.
•...Jan says 'Marcia, Marcia, Marcia' in front of a mirror and Marcia jumps out and kills her.
•...The evil member of the Bradys, Wayne Brady, is released from purgatory (after being placed there by Mike for 30,000 years) and comes back to wreak his revenge on the family. However, Marcia uses her sado-masochistic powers to return him whence he came.
•...Tom Brady is born to Cindy by way of her torrid affair with Greg, and left on the doorstep of the local Lacrosse team by a demon-possessed Jan. Tom goes on to score 389 million touchdowns, however Jan travels back in time and kills Greg to solve everything.
•...Mike Brady is replaced by little Kim Jong Il in a hilarious mix-up. The Brady family is temporarily placed on the axis of evil.
•...Jan saves the family from a serial killer and Peter is so grateful he offers to be her sex slave. Jan gets carried away and the two are grounded when Alice discovers whip scars on Peter's arms and Jello stains on the carpet.
•...Bobby gets addicted to 4chan memes and must undergo shock therapy.
•...In the year 30,556, Paris Hilton steals Carol's rank as "No. 1 Bitch in the World". Carol stalked Paris on a deserted street at night and threw her up into the sky, into space. Paris is currently believed to have been sucked into a black hole.
•...While on vacation Greg and Marcia get lost and wind up in east L.A. where Greg is overheard by a local gang member saying "nigga" while reciting a poem from Poems On Tape: by Flava Flav. Mayhem ensues while Greg is introduced to the Alabama Hot Pocket.
•...While avidly job searching after college graduation, Marcia realizes her true calling and starts a prank show, very similar to Ashton Kutcher's Punk'd, except her series was titled "Aid'd". The show consists of Marcia planting syringes filled with AIDS all around Los Angeles and whenever an unsuspecting victim comes in contact with the AIDS syringe, Marcia pops out, in a hilarious manner informing them they now have AIDS.
•...Brady Quinn is adopted by the Brady family after being put on waivers but when everyone realizes he is totally overrated, he becomes a backup for Greg.
•...After finding out that Cousin Oliver does voices for the show Naruto, the gang decides to guest star on the show, thus leading to a ratings boost, and subsuquent recapture of Oliver.
•...Mike cruises around in his car, picking up men and forcing them to pay him for sex. No really, it's what he really did!
•...Thirty minutes of Mike fucking a young hustler up the ass, then inserting a dildo into his anus. This episode is notorious for the sheer amount of bad dialogue, and having no plot whatsoever.
•...Cindy goes on a field trip to a slaughterhouse, and from then on refuses to eat any sort of meat. She even goes so far as to kill Sam The Butcher in a Kill Bill style fight scene.
•...The crossover with The Amazing Chan and the Chan Clan in which Stanley and Henry fight to the near death over who gets to bone Marcia, Alan does drugs with Greg and they make a Suzie sandwich with extra "secret sauce", Jan discovers her inner lesbian when she and Anne kiss, and Tom confides to Peter and Mike about his budding sexual confusion only to end up in the shower with Peter. The younger kids videotape the antics and sell the tapes for a profit.

In the 1974 season, the family acquired a live-in "cousin," Oliver, who was kept in the basement as a sex slave. Oliver was an ancient energy “key” who had been transformed by monks in order to protect it from the mad goddess, Glory. Initially, Cousin Oliver materialized in the form of a furry humanoid. He was given a more human appearance with the introduction into his system of DNA from John Denver.

While the original network airings don't show the footage the "Definitive DVD" edition shows Mike Brady having his way with him.

The boy felt out of place in the Brady family and ran away. In a surprise twist Oliver turned up picking pockets on the streets of London. Despite the widespread popularity of the Oliver plot line the network cancelled the show later that year.

To further complicate matters Mike Brady was spending more and more time with Yoko, insisting she be on the set at all times and working her into the plots. This led to the haunting Brady Kids song "Imagine":

We wonder if you can

No need for Jan or Marcia

Not even butcher Sam 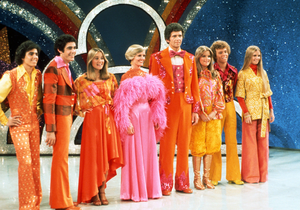 Shit you should know aka Trivia[edit]

When they're not acting in sequels or attending fan conventions the Brady Bunch actors have varied lives of their own.

For a few months, Sherwood Schwartz was criticized for portraying the group as a Mafia Crime Family. In several episodes, Mr. Brady was portrayed as the Don of the "Brady Crime Family", shown running casinos and racketeering the neighbors and local businesses. In one episode, broadcast in 1972, Mike Brady had four rival Dons assassinated during the baptism of his eldest son, Greg Brady. After an interview with Schwartz, the episode was declared lost and no further comments were made.