“Show us your tits!”

“Should have made a show about me...”

“Is there Kryptonite in your balls, Clark? Grow some!”

~ Lex Luthor on Unauthorized entries into his office

“What's with Smallville? With the Small, and the Ville, and the Clark, and the Kent, and the superpowers, and the hot girl, and the meteors, and the bald guy...”

“It's dirty, it's bloody, and it's full of surprises. Wha? I was talking about my underwear, but the same goes for Smallville. ” 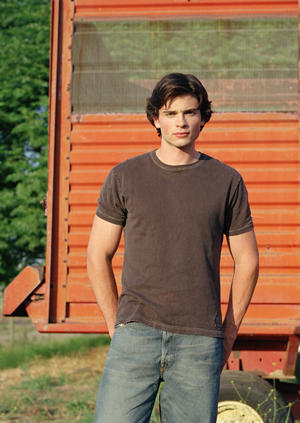 Clark Kent has super strength and speed, invulnerability, heat vision, ice breath, distressed stonewashed jeans, super breath and can probably fly. Who does he thinks he is? Superman? What a douche.

For those without comedic tastes, the so-called experts at Wikipedia have an article about Smallville.

Smallville is a small ass town somewhere in Kansas (AKA. Cloverdale,B.C, in Canada) that no one cared about until a hundred metric assloads of space garbage got dumped in their town. The town's average IQ is 53 and is populated entirely of hicks that look exactly like fashion models and act like horrible actors. People ended up learning that the green meteor rocks give them strange powers. There was one occasion where a baby was infected by the meteor rock and started farting poisonous gases that knocked out anyone within a five mile radius and gave many of the victims permanent strep throat. The Smallville high school is the only school in Smallville. There is a 47% survival rate for students. Some people also claim to have seen a space ship crash land with the meteor shower, but this is just crazy, and has absolutely nothing to do with that loser Clark Kent.

Ever since the first Meteor Shower, lots of weird stuff started going down. For one, the town started to have an increase in mutants, something that usually only happens in Marvel Comics. It appears that meteor rocks, as know as shiny kryptonite, can be found in titanic amounts just about everywhere in Smallville, and can be used in many products, from Stride gum to car fuel. Nobody uses kryptonite outside the rural redneck city.

It also seems that a solo hero has been doing his share of community service by kicking all of the freak mutant asses. Apparently no one ever sees him. Must be super fast or something. Finally, all this usually happens near Clark Kent. He's a bad liar and an attention whore. I mean... look at that picture on the right. It SCREAMS attention whore. But it doesn't have anything to do with him. He's a loser. He is ridiculously dumb. Anyone that see's him Clark claims that they must die so that he can save his mom and his barn. 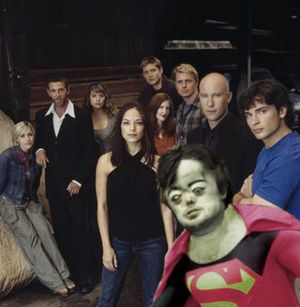 One of the biggest rumors of this town is that it is the hometown of Superman. This leads people to believe that Superman is actually the hero of Smallville! This is unlikely however, seeing that Clark Kent is at nearly every incident, its impossible someone so cool would want to be anywhere near someone so lame.

Batman began making guest appearances on Smallville in Season 6. However, like many DC Comics characters that have appeared on the show, his character was slightly modified. the Smallville version of Batman wears a green suit, and, instead of throwing Bat-Discs, he fires green arrows. Thus he has tentatively been dubbed Gay Batman.

There are only 13 places on which all the series develop:

Clark and his spandex clad friends, victoriously walking in slow motion after a long night of committing terrorist acts against Luthorcorp.

There are precisely eight, sorry, nine types of plots that make up a Smallville episode. They are:

Unfortunately for the writers, Plot Type 8 was rendered useless when Jonathan Kent finally decided to kick the bucket right after he beat the tar out of Lionel Luthor following Lionel's confession of his undying love for Clark.

Hang on, it looks like there's a tenth type

And the eleventh type

It has been long rumored, but only recently revealed that Smallville will be crossing over with other CW series Supernatural. In an interview Supernatural creator Eric Kripke commented on the impending crossover quoting, "If I'm going down, I'm taking those assholes at Smallville with me." Not much is known about the plot other than Sam Winchester, and brother Dean Winchester, will travel to Smallville, in an attempt to investigate the strange occurrences there. It is also speculated that the truth about Dean's past life in Smallville, along with dating the town's It girl, Lana Lang, during his year spent in the town will be further explained in the crossover episode. Little else is known other than the Winchester brothers will mistake Clark for a demon, and subsequently kill him. It is also rumored that Sarah Michelle Gellar will guest star in the episode, reprising her role as Buffy Summers, in an attempt to make the episode even more needlessly crappy than the writers originally intended it.

Chloe Sullivan: Boy, Clark. It sure was a good thing you managed to get here split seconds before that bullet killed Jimmy through a plate glass window that would have shattered all over me and knocked me over onto Lois, breaking her neck and causing her to press that ENTER button which would have detonated that bomb attached to Lana that this week's insane meteor freak planted on her.
Clark Kent: Yeah, I know! Crazy shit, huh?

Lois Lane: Clark, how did your barn door just shoot out of the sky like that?
Clark: Uh, it was probably the wind. It does that sometimes.
Lois Lane: No way.
Clark: Uh, actually now that I think about it ... I have been measuring a shift that has been taking place in the Earth's axis and that combined with the solar wind eroding that magnetic field has caused a miniature, temporary black hole to form here, at the epicenter of all this conundrum. Subsequently, the organic molecule in my barn door and the lead paint were affected by the black hole and that caused it to fly off like so.
Lois Lane: Oh.

Clark: Okay, Chloe, turn around and bend over. I'm going to ram my...oh, the red kryptonite has worn off. What was I doing just then?
Chloe: Sh*t! Erm, I mean nothing, nothing at all and I shall never speak of this again.

Lex Luthor (after seeing Aquaman, Green Arrow, Cyborg, The Flash and Superman): So, where's Batman?
Green Arrow: Shhh! Shut up, Michael! Do you want to get our asses sued?

Clark: Hello Lex.
Lex: Clark what's happening?
Clark: Lex, I just heard that a man died of a heart attack somewhere in Cambodia. Did you have anything to do with this?
Lex: Um... No?
Clark: I'm on to you, Lex!
[Clark walks away, glaring at Lex suspiciously]

[Clark walks into Lex's office]
Clark: Lex! I just found out something strange.
Lex: What is it now, Clark?
Clark: Both the Jews and the Romans say that they didn't crucify Jesus Christ.
Lex: Yeah, so what?
Clark: Quit playing games, Lex. I know you're the one behind this. Admit it, you killed Jesus!
Lex: You do know you're insane, right? Now leave!
Clark: I'm not leaving without answers, Lex.
Lex: ... OMG!! Get the fuck out of my office, you moron.
Clark: This isn't over. You won't get away with this.
[Stalks out in an angry fashion]

[Pete walks in to the Daily Planet]

Pete Ross: Hey, how did you guys manage to get jobs as big-time writers for a big-time newspaper when neither of you has been to college?
Lois: Well, I slept with the boss who turned out to be a clone of Lex Luthor's dead brother and he said I could have the job.
Clark: Oh yeah, I also slept with the clone and he gave me the job.

Lex: I'm dead now. You have no reason to watch the show anymore.

Superman: Hey I think I'm ready to embrace my destiny!
Lex: It's about time, Clark. I was getting bored of being dead.
Superman: Watch your mouth, Mister. (slaps)
Lex: You dare--
Superman: Hold that thought. I think Doomsday's attacking the world. I better go push Apokolips out of the way real quick.
Lex: Bye Clarkie!!! Did you remember your lunch?
Superman: But mom...
Lex: Don't you dare talk back to your mother!
Superman: Yes ma'am (walks away)

Darkseid: Kal-El, I have come to destroy you.
Clark: Oh, yeah, about that. Let me just go and grab my ancient Kryptonian crystal... which I hid under a floorboard... in my barn... which I am in the process of selling....
Darkseid: ...