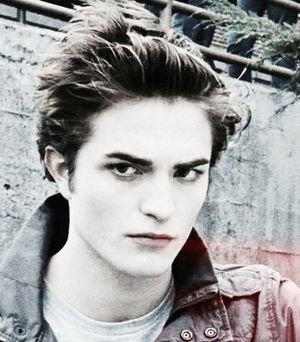 Edward Cullen (né Edward Anthony Masen) is the name of an American makeup designer popular with prepubescent females. He is well known for producing makeup with almost no pigmentation, to match his own terrifyingly pale skin tone. He produces a wide range of products designed for albinos and others who live with an utter lack of melanin. As to why his makeup is crafted to cause a twinkling, sparkling effect, Edward refuses to comment. 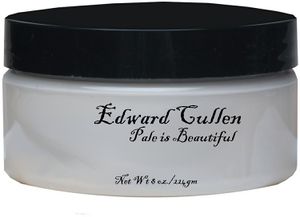 Cullen's products universally cater to those who need a match to their own utterly white skin tone, or who wish to look more like albinos. The majority of his product line revolves around base-coats, or products that are applied liberally, in a thick layer, designed to completely cover one's own natural skin color and make the consumer look like a bizarre albino vampire. He also supplies a range of products favored by emo kids, such as thick black eyeliner, black lipstick, black nail polish, black Eyebrow wax, black, amber, and red contact lenses, and a huge assortment of hair dyes.

All of Cullen's products are prohibitively expensive, owing to the fact that he fills them liberally with industrial grade powdered diamonds, giving his customers their trademark sparkle and causing a wide variety of hideous skin disorders, which then require yet more makeup to conceal. Cullen has been known to call this the 'circle of wealth'.

Cullen is a secretive sort, living with a large extended 'family' he isn't related to in Backhoe, Alaska. The family lives in a huge, incredibly luxurious mansion built in the ass-end of nowhere, down a dirt road through a grove of thick, dense brush. Numerous journalists and paparazzi have attempted to reach the house, seeking interviews or incriminating pictures, but none have ever been seen again. They are presumed idiots. The area that the house, as well as the nearby town, are in, receive the smallest amount of sunshine per capita in the entirety of North America, which makes it ideal for Cullen, as if that skin of his is real, he'd have a sunburn within seconds of exposure, and probably burst into flame shortly thereafter.

On cloudy days, despite being in the area of eighty years old, he attends a local high school in the guise of a teenager, in a creepy attempt to cling to his lost youth, which strangely still shows in his looks. He has been in high school for decades, which helps explain his laconic tendencies and general aloofness, which is frequently mistaken for depression. While at school, rather than using his incredible store of high-school level knowledge to help improve the grades and lives of his classmates (not that he doesn't use them to his own advantage), he spends his time leaning against walls, hanging out, excluding others, and generally acting like a really cool young man. His high school time also serves as the hub for one of his primary leisure activities, stalking that new girl in school who really pissed him off the first time they met.

On sunny days, he cowers in his basement, developing new makeup products to foist on an unsuspecting population of adoring pre-teen girls.

In his nights, he pursues his other passion: hunting large, dangerous predatory animals. Strangely enough, he has been reported to leave their carcasses behind, though all their blood has been drained out. 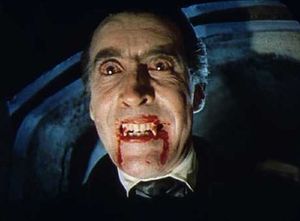 This is what a real vampire looks like. Seriously. Edward Cullen? A vampire?

There have been a number of rumors circulating that Edward Cullen may be a supernatural freak of nature. Some people have deduced that Edward may actually be a vampire, citing his habit of hunting and subsequently draining the blood out of random animals as "proof". It was reported that a high school student whom Edward initially stalked knew all about this, even though she vehemently denied the same. What is even more intriguing is that this high school student named Bella Swan subsequently married him shortly after graduating from high school, and began sporting his makeup products not too long after that. Edward insists that she's doing this merely because she chose to become his make-up line's brand ambassador, and that they plan on running the business together now.

However, the rumors refuse to die down, especially after reports began surfacing that Edward and Bella frequently went on hunting trips together. In fact, rumors that Bella herself had become a vampire began circulating to such an extent that Edward had to hold a press conference in order to clear the air.

“Of course I'm not a vampire. Do you people even watch movies? Vampires are terrifying undead monsters created to force horror into the hearts of the living. They are truly, truly scary motherfuckers. I wear makeup, and I sparkle. I mean it, I sparkle like a diamond-studded....thing. Anyone who thinks I'm a real vampire is a cretin and a loon.”

~ Edward Cullen on the rumors

For those without comedic tastes, the so-called experts at Wikipedia have an article about Edward Cullen.
Retrieved from "http://en.uncyclopedia.co/w/index.php?title=Edward_Cullen&oldid=5937612"
Categories: