~ Victim on his eyebrow

~ Oscar Wilde on the above quote

~ Oscar Wilde on noticing he has an eyebrow

You might have noticed two itchy fur worms spanning the length of your eyes. Some unfortunate people have only one. Shave it off! They are evil space worms, and they're trying to suck your face off! People who have really bushy eyebrows have almost their entire face off, because all that extra fur on the space fur worm is actually their face. Please, for the good of the people, shave it off! 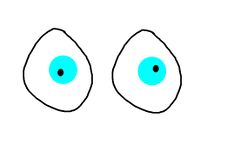 This an average, blue Ai.

These were created a long time ago, in a galaxy far, far away...or a few years ago, records a sketchy at that time. Anyway, eyebrows, more commonly known as Aibraos, are a species of alien. They are a crossbreed of the Ai alien race and the Brao alien race.

A few years before the Aibraos were created, the mighty alien race of Ai[1] came to Earth, known then only by God as Soleil 3. The Ais looked like a pair of tiny round spheres with little black dots in them, surrounded by differently colored circles. The Ais made their home on Soleil 3 on our faces as what we now know as 'eyes'[2]. These creatures had taken pity on out largely sphereless faces, unless someone happen to put their mouth in an O shape, but even then, it wasn't a sphere, it was a circle. Duh. Unfortunately, some Ai were crippled and their black dots don't work. Humans with these Ai are called 'blind'.

A Brao in the process of attaching itself to a human head. For some reason, the human appears angry that the Brao is trying to make him good-looking!

A few days after the Ais made their home here, the race of Brao[3] came to Soleil 3. The Braos saw the horrible, flat foreheads of the humans, and decided to make them stick out more. The Braos planted themselves onto the humans ugly foreheads. These Brao stuck to our head are called 'brows'[4], and have made humans look 110% more fabulous, in my opinion. I mean, come on! Look at the browless humans! U-GLY! Anyway, just like the Ai, some Brao are crippled and are extremely flat. These are deemed outcasts in the Brao society, and should in human society too.

Somehow, a Brao and an Ai procreate and make this.

After a few years of living on Soleil 3, the Ai decided to look up and the Brao decided to look down, and, lo and behold, the two alien races finally met! There was much rejoicing, and a few cigarettes were lit. A party was held in celebration for the meeting of the two alien races, something they called Høsttakkefest. Of course, the humans got it all wrong and called it Thanksgiving, but who's complaining?

After the first Høsttakkefest, a shy Ai girl and a shy Brao boy met each other. "Hi," said the boy. "Fuck off, you freak," said the girl. The next day, the Ai girl was lying in bed with the Brao boy, wondering the hell happened the previous night. She fled his house and was never to be seen again...according to the human media. The human media said that a giant eye had escaped to the sky, and a cursed article of hand jewelry was supposed to kill it or something. The boy, heartbroken, decided to attach himself onto an elf named Frodo's forehead, since Frodo was heading in the same general direction as his love. He was going to use the ring to marry her. But the true, un-media story is that she died in childbirth and the father killed himself for having a fucked up looking son. That son was the very first Aibrao[5], occasionally known as eyebrow[6]

The monobrao is a subspecies of aibrao, where the two segments have fused together, making a bushy connector. This connector is perhaps one of the most dangerous body parts of any species alive or dead, as it can suck your face off in at least an hour, whereas normally it takes several years, even one hundred sometimes. The sucking off of a humans face generally results in the usually fatal disease called death.

They look exactly the same as normal aibraos, named twobraos, except for the bushy part I told you about earlier. Weren't you paying attention?

Ray Mears' Unibrow is a truly inspirational example of this. Check it out!

The twobrao is a common subspecies of aibrao, known for its tendency to have two segments. Humans with this subspecies are very lucky, as they live the longest, sometimes up to past birth. Sometimes. Other times, their twobraos get caught in the birth canal, which ends up killing both the baby, and the birth giver. Dumbass baby. That's why abortions are pretty okay, actually. Pay no attention to the previous statement, as the government did not bribe me to say it.

Anyway, people with twobraos are generally more intelligent, muscular, good-looking, and funny than other, non-twobrao people. See that shrine over there? That is a shrine dedicated to twobrao people. Uh oh, what's that? It seems a group of vandals are about to burn it to the ground! Well, we might as well do absolutely nothing about that. They'll probably hurt us or something. And do you want to have your kneecaps broken? That's what I thought. Now let the good people do their work.

~ Mother Theresa on discovering her threebrao

Threebraos are exactly the same as twobraos, except that it has one more segment located up your ass. This is extremely dangerous, as it can suck your face off from way down there, and having your face sucked through your body is generally an unpleasant experience. The segment up your ass, over time, can spread out of your ass and across your cheeks, making the victim have a hairy buttocks.

There is actually an Eyebrow Olympics, where atheletes from all over the world can test their skill and endurance in the eyebrow arts. Go here to see it. Or possibly here. Or you could just click on the link I provided earlier, in the first sentence.

What to do if you have any[edit]

If you happen to receive one of these three species of aibrao, shave it off immediately! Shaving it does three things. Most obviously, it destroys the threat of having your face sucked off. Do you want your face sucked off? You'd be a fucktard if you do. Secondly, and probably more obvious than the last one, you'll look better. Unless you were ugly to begin with, then no. You'll probably look worse. Well, sucks to be you, doesn't it? Let's all point and laugh at your misery! And, thirdly[7], well...the second one counts as two since it's so much better. I mean, come on! I'd rather look good than have no face, wouldn't you? FA-BU-LAS!

If someone you know has one, but you don't[edit]