“I couldn't give a turkey's shit.”

~ The rest of the world on thanksgiving day

Thanksgiving day, also known as 'Stupid Pilgrim's day', is a pagan celebration of the day food was invented, held by Americans, Canadians, Uglo-Americans and certain areas in Japan that just want to suck american cock by copying everything that gay bears do. It also happens to be America's only holiday that celebrates the anniversary of the murdering and raping of native Americans, proceeding to kick them off their land, and force them into small reservations. Afterwards pilgrims raided their tepees and gorged on all their food. But we refuse to tell our children that, but instead help them put together shitty first grade plays about the "First Thanksgiving".

It is usually celebrated on the 32nd of November, and is one of America's 150 officially (and 215 unofficially) recognized gorging holidays, in which every resident is required to eat until food oozes from at least 4 orifices. Failure to comply with this law (Gluttony vs. Common Sense (1953)) results in the perpetrator being forced to watch football. And as you all know we pretend to give thanks and be thankful, but we should really be thankful is that they didn't kill us all for taking all their land. So why don't we all face the truth and call it "never trust the noobs day".

The first recorded instance of a Thanksgiving celebration (then known as "Operation Fool the Indians") occurred in 1578, when colonist George Burns held a feast for his English compatriots to celebrate their safe passage across the Atlantic. The colonists, who had survived the early part of the journey by eating the Scottish passengers aboard the ship, arrived starving on the mainland. Further colonists arrived in 1621, where they were welcomed by the Native Americans, who donated enough turkey, cranberries and Jack Daniels to ensure the colonists' survival during their winter hibernation. We're all pretty sure there was something to do with a rock named Plymouth, but who can really tell?

The French Toast colonists who arrived on the same voyage went on to found New Orleans and then New New Orleans where they still celebrate Mardi Gras (lit: "anorexic Wednesday") in celebration of the English colonists' awakening in the Spring. To this day, the spices used in cajun cooking work well with any meat that tastes a little bit like pork. The French still refer to the English as "les Ros Bifs" (lit: the roast beef). The English refuse to eat the French as they have no taste. See also Agincourt.

The Germ colonists were already familiar with, what they called, Dankgeben - meaning thank giving. The idea of giving multiple thanks being, to them, quite eccentric and frivolous. So they decided to play along and plot the demise of the other colonists with the help of their Prussian efficiency. Although modern accounts tell of them spending the majority of their time perfecting and eating apple strudel.

The first officially recognized Thanksgiving day occurred in 1777, when the Pokemon taught the Jedi how to harvest crops.

Years later, after Washington had become President of the United States of America and Grand Poobah of America Junior, he again declared Thanksgiving day, this time to distract the public from the ensuing 'wooden teeth' scandal (with the tell-tale splinters found on the blue dress) in which he was embroiled.

Though it was many years before Thanksgiving day became an officially recognized holiday in either America or Canada, many politicians used it sporadically as a way of appeasing or distracting the public from their nefarious actions.

It became an annual holiday in the United States of America in 1863, and in Canada in 2001.

Each year, the native species of the Americas make a tithe to their new overlords. This tithe usually involves the sacrifice of one or more hookers and a Native American, either as a flesh-and-blood offering or as an apprentice to a colonial craftsman. In past years a single Native American has provided this yearly sacrifice by appearing in place of his fellows in every Hollywood blockbuster made; a heroic stance to which much romantic notion is attached. More recently colonists and aliens such as Steven Seagal and Daniel Day-Lewis have taken over this role as the number of pure Native Americans has decreased. (Petitions to get a real-life turkey to take their place have so far failed, stopped by animal rights activists).

The government of the United States of America has now passed a law declaring that Native Americans shall only be considered as such if both parents of the would-be Native American are descended from the same tribe; ie: the child of a Cherokee and a Cheyenne is considered merely mixed race and is not entitled to participate in the yearly sacrifice.

Since 1984 the traditional meal for Canadian thanksgiving has consisted of Kraft Dinner (otherwise known as Macacroni and Cheese) and fried bologna. The carving of the bologna is an honor typically reserved for the head of household or the favorite child decided by the mother. 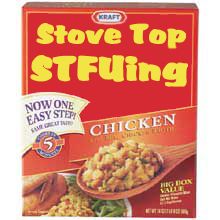 Today Thanksgiving is a time to praise the deity of your choice (Jesus, Allah, Jack Daniels etc.) that you finally moved out of that hell-hole that is your childhood. As a reminder of all that you have risen above, thousands of Americans make the journey to be with their family and share in the glory that is your embarrassing uncle. This has brought rise to the day after Thanksgiving to be the biggest shopping day of the year because nothing reinforces the feeling of hell than being stuck in a mall parking lot for hours.

The females of the family are also reminded of their subservient, unthanked, never-ending role of homemaker. In most of the country women are expected to prepare the meal to perfection and clear the dishes because football is on, and its scientifically proven that that Tryptophan stuff in turkey makes men sleepy five times faster than women. Of course, listening to women talk is known to make men sleepy as well, though the presence of Tryptophan in female conversation is debated, on account of their inherent stupidity.

A court case in 1967 (Chief Humping Horse vs. State of Maryland) decided that Native Americans were no longer allowed to eat turkey. This was a pastime reserved only for the white man.

There are many other rituals associated with Thanksgiving. These include:

Slaps Giving (Slapping people as a gesture of Thanking People!)[edit] 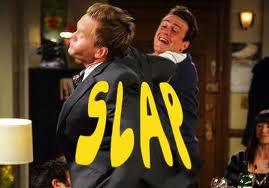 This alternate way of celebrating Thanks Giving was invented by Marshall Eriksen as a way of expressing his love and gratitude towards Barney Stinson the long time admirer of his wife Lily Aldrin in the popular sitcom How I Met Your Mother.

In this kind of celebration you set up an online count down timer that counts to the day of Thanks Giving right to the moment when you plan to smack them hard in their faces right in front of rest of your friends.

However the most popular and hilarious real life adaptation of SlapsGiving happened to be in India (of all the freaking places in the world!) right on Thanks Giving on Thursday 24th November 2011. When a young Sikh named Harvinder Singh expressed his gratitude towards the Indian Agriculture Minister Sharad Pawar by handing a God Almighty Smack Right Across his freaking ugly distorted face while the poor (actually ultra filthy rich) heptagenearian was walking out of a literary convention. The event was marked by a nationwide handing of slaps to each other by people of various political affiliations.

There are mass riots, as the entire population goes on a looting spree. Also known as Anarchy Awareness Day, wherein all laws are abolished and everything is first come first serve.

In the end, points are awarded in such categories as: Most Looting, Most Fatalities, and Best Infiltration.

Winners are promptly declared terrorists to keep the US busy for another 6 months.

Following the success of the movie 'Miracle on 34th Street', Hollywood were keen to exploit Thanksgiving on the silver screen. For many years the production was held up in red tape and political wrangling. Finally in 2002 the Republican party bought the production rights, and it was released in 2003 (on Thanksgiving day of course).

A scheme by Al Queda and Saddam Hussein to unleash an army of genetically mutated turkeys on America is discovered by intrepid soldier and hero, 'Dubya'. Alas, his discovery comes too late, and the turkeys have already invaded several major cities. With the help of radical Christians all over the country Dubya destroys the marauding 'tourist turkeys', and saves America once again.