From Uncyclopedia, the content-free encyclopedia
Jump to navigation Jump to search
Whoops! Maybe you were looking for the Yahoo! stock titled STFU. Too Bad For You. Why don't you just fuck off?
“Oh my god, all I asked was what 'STFU' means and he told me to shut the fuck up!”

“STFU and talk filthy lucre to me.” 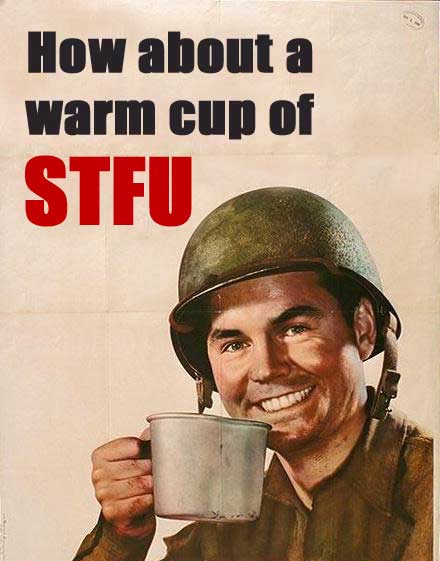 In Soviet Russia STFU!
“You need to SHUT THE FUCK UP!!”

~ Penn Jillette the Magician on Enviromentalists

STFU is internet-speak for "Start Talking Faster Underdog" Or, it can mean "being silent with a curse going vertical" It is used primarily in crowded internet chatrooms, when someone is telling a long story but it is isn't being heard due to the other chatter. It indicates that the person should start talking faster, in order to drown out the other people's conversations.

In some (incorrect) circles, STFU can be translated to mean "Start talking faster underdog!" Obviously, the original manuscript, ess tee eff uuu, is open to interpretation, but only Uncyclopedia is right, so there. Everyone ELSE knows it as, "Shut the FUCK UP!" 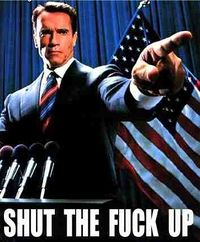 I am the Governator!

It should be noted that using STFU wrongly would probably get you banned from the Internet so remember to STFU properly.

People on the Internet are happy to help you to shut the fuck up!

STFU is also often confused with ancient Japanese Christian (Yes! They Exist!) Saint Fu (St Fu for short). However, this was solved by historical documents proving that Fu's real name was, in fact, St Fuck.