ROFLWAFFLES is a phrase in internet-speak that was created when a n00b realized that "ROFL" and "waffle" rhyme (unless you pronounce each letter of ROFL like "R-O-F-L" or if you pronounce waffle so that it rhymes with "raffle"). It is not to be confused with wafflecopter, the arch enemy of the roflcopter.

Despite its common use as a phrase in internet-speak, ROFLWAFFLES were also a species of dinosaur. In addition, they are commonly accepted to be the ancestor of modern waffles.

The ROFLWAFFLE was first discovered as a fossil in 1923 by archaeologist and mountaineer Sir Edmund Hillary during a dig in Great Britain. Soon after he found the fossil, Hillary dubbed it Wafflus rofflus, meaning in Latin "ROFL WAFFLE", because he couldn't stop cracking up when he realized he had unearthed a giant, fossilized waffle. When Hillary gathered himself, he built a large toaster, cooked the waffle, drenched it in syrup and butter, and ate it for breakfast. Of course, because the waffle was huge, Sir Hillary's stomach exploded, killing him. Sadly. Although he had dubbed it "one of a kind", the fossil Hillary found was not the last. The rest of Hillary's expedition, after deciding that Hillary was certainly dead, came to the consensus that they should not let a perfectly good trip go to waste and unearthed more fossils in the next few days. When word of this got out, the scientific community was shocked.

The fossils Hillary's expedition had found showed the ROFLWAFFLE was a winged creature standing ten feet tall and twenty-five feet across, covered in green scales, and very much to the liking of the band Queen. He believed the ROFLWAFFLE to have dominated the skies, terrorizing and breathing fire on civilians. Scientists easily denounced this as absurd, offering the explanation that the group had merely come across ancient deposits of baked goods. 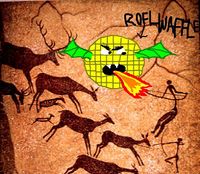 The ROFLWAFFLE in a cave painting.

However, when the ancient cave of Lascaux and its many cave paintings were stumbled upon September 12, 1940 in France, the scientific community realized their grave mistake: Amongst the paintings were depictions of the ROFLWAFFLE terrorizing primitive European tribes too poor to afford internet access.

This find stunned scientists, verifying many of the claims made from examining fossils, and yet causing controversy. Many scientists claimed that Lascaux must be a hoax created by ROFLWAFFLE fans such as Leonardo da Vinci, Michelangelo, and Claude Monet, as there was no way such waffles could have existed without superior baking technology. This absolute denial went on until finally, in 1955, a group of scientists who studied the ROFLWAFFLE in its natural habitat (modern Europe) published their findings. The very next year, Wafflus rofflus was officially named a species. When hearing of this news, the rest of Sir Edmund Hillary's expedition said, "Told you so!"

ROFLWAFFLES are known to be quite delicious as well as nutritious. It is often said that ROFLWAFFLES taste so incredibly awesome that no matter what they are topped with, they always taste awesome. This was proved in a famous experiment by Albert Einstein. To begin, he took two dead ROFLWAFFLES and topped one with disgusting things such as bugs and poo-poos. The other was left plain. Both were then fed to a blindfolded colleague. Einstein was astounded when his colleague stated that both waffles tasted precisely the same: awesome.

A picture taken of Hiroshima when the two ROFLWAFFLES were combined.

Despite this, there has been one known instance in history where topping a ROFLWAFFLE with another ROFLWAFFLE produced a force of awesome so powerful it almost completely leveled Hiroshima, Japan on August 6, 1945, killing 73,000 people. Strangely, the explosion left behind large amounts of radioactive material, indicating that ROFLWAFFLES are probably composed largely of enriched uranium.

The news of such an atomic explosion did not reach the nearby city of Nagasaki in time for another disaster to be prevented, though. Three days later, on August 9, 1945, another explosion completely leveled Nagasaki in the same manner as Hiroshima. It was a tragedy. But, with the application of modern thinking, "a whole buttload of deaths" became statistics.

Research on combining larger numbers of ROFLWAFFLES has been impossible, as there is no method of mathematical calculation known to mankind able to predict any results. Hence, it is officially stated the fusion of four or more ROFLWAFFLES results in absolutely nothing. This is because the potential energy of the ROFLWAFFLES cancel each other out, causing a total neutralization between them.

It has often been said that the United States is, in fact, responsible for Hiroshima and Nagasaki, and that the cause of the explosions were two atomic bombs named Fat Man and Little Boy, dropped by two planes called the Enola Gay and Bocks Car, but this is false. Although it is true that the U.S. was planning to bomb the two cities, military reports show that when the Enola Gay and "Bocks Car" reached their targets, they were already obliterated. Regardless, President Harry S. Truman, determined to prove to the world he was responsible for killing hundreds of thousands, announced on the radio that Enola Gay and Bocks Car had done the deed. Certain near death victims claim to have witnessed all time in a single instant and report that the big bang might have been 2 roflwaffles dubble teaming an anti-roflewaffle while this is unconfirmed half of the group admit they were not fighting but cross breeding to create a hybrid also know as matter and it was coolies. It is also believed one of the rofl waffles was diagnosed with bro syndrome meaing that the spark could have come when he kept on saying bro

Note: It is not suggested that someone should buy ROFLWAFFLE bread and create a famous sandwich on their own. Both the Bacon and Cheese Sandwich of 1905 and the Überwich were created in top-secret, classified labs by expert sandwichologists under extremely safe conditions. Refusal to comply with such safety standards could result in death, or worse.

As long as ROFLWAFFLES have existed, of course, there has been Anti-ROFLWAFLLEism. Although there have not been any major anti-ROFLWAFFLE movements, several groups have existed solely for the reason of opposing ROFLWAFFLES for a very long time. The most recent of these groups was the Ku Klux Klan, formed in the late 1800s by a man named Kevin Ku Klux, whose initials are, ironically, ROFLWAFFLES. It is believed that his initials were a main factor that led to Kevin Ku Klux's fierce opposition of ROFLWAFFLES. However, with the manner in which he spelt "clan" as "klan", historians now believe that Kevin's initials were ROFLWAFFLES merely because he was horribly unable to spell. New research also indicates that this Kevin Ku Klux was the same guy who came up with the internet-speak phrase "ROFLPANCAKES".

At the start of 2010, the waffle army resurrected the ROFLWAFFLE and attacked ihops of the world. Only civilians were killed.