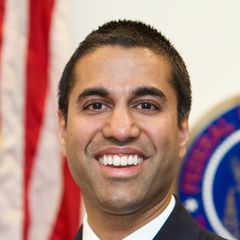 WARNING: Prolonged exposure to Ajit Pai's face may result in frustration, anger, and an incessant need to call your local representative.

“This man has the most punchable face I have seen since Nigel Farage. I have an irrepressible need to punch him in the goddamned face...”

– Everyone on Ajit Pai

Ajit Varadaraj Pai (named after the Hokkien "Ji Pai", translating to "Cunt") is a sort of spineless invertebrate known for its impressive capacity to annoy people from the Internet, as well as anyone else within a 2 km vicinity of the specimen. It is the first Indian American to abuse its office. It also has one of the most punchable faces of any known mammalian species, measured at approximately 10 kiloFarages of punchability in an MIT study. This is second only to Donald Trump, who is rated at 20 kiloFarages.

It is currently part of a five-man Sith council who rule over the FCC, a bureau designed to spread weak memes and internet-transmitted cancer throughout the country it inhabits.

This somehow flattened version of Dr. Raj Koothrappali was appointed by the meme-turned-president Donald Duck in January 2017, and confirmed for another five-year term as "Fürher of the Internet" by the Senate in October.

Ajit Pai was forged from the darkness on January 10, 1973, in Buffalo, New York, and still managed to grow up in some place worse. His parents are Konkani (a culture descendant from the Honkanki, Clonkanki, and Ecky-ecky-zoop-boing-begawwwkanki). They are immigrants from India to America, his father Varadaraj Pai, a urinelogist, and his mother Radha Pai, an anesthesiologist (a profession that allowed her to induce and maintain the utter disconnection from reality now held by her son). 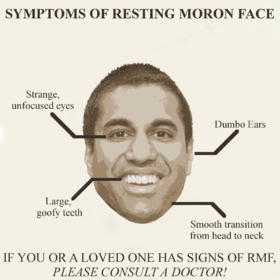 In the late 1980s, Pai's gross misuse of brain-damaging horse anesthetics started to take its toll; Pai began to show signs of forming the fatal Resting Moron Face (RMF) syndrome."He used to be a beautiful little boy. Now I can't stop laughing at his little fucknugget face," his mother said in an 1995 interview. Pai later began a campaign to prove to the world that those with RMF are still people, too. "I will try to be proof for my fellow Americans that just because you look like a huge douchebag fucknugget, you don't have to be one in here," Pai said in an interview. Why exactly he pointed to his genitalia and winked seductively after saying this has yet to be explained publicly.

On July 10, 2010, Pai married Janine Van Lancker, an allergist. Janine took an interest with Ajit mostly to study the strange allergic reaction which develops within people closer than 5 meters distance from him. Symptoms include disdain, a bizarre love of weak memes, and a sudden desire to accept bribes from Comcast affiliates. Pai lives in Arlington, Virginia, with his wife and two children. In case of emergency, his house features a nuclear bunker to defend himself in the event of pitchfork-bearing mobs appearing outside his house, as occurred in the weeks following the December 14 2017 decision. Now locked inside his bunker, Scientists suggest that either his bunker will give in or his food will run out by early 2018. 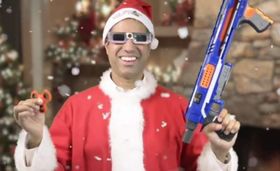 What the literal fuck is even going on anymore

Pai has been an advocate for less regulation during his tenure on the FCC. "He is seen as a closer ally to broadcasters than other members of the FCC," says Wikipedia, which translated from Wikipedian means "this man is a bought-and-paid for corporate shill for the telecom monopolists, whose dicks he sucks for money."

In testimony before the U.S. House of Representatives Energy and Commerce Committee’s Subcommittee on Communications and Technology on July 10, 2012, he warned about the dangers of regulatory uncertainty and the need for the FCC to keep pace with the dynamic communications sector. As of 2017, nobody has managed to figure out what the hell that was even supposed to mean, but many found its choice of words "fancy" and "vaguely libertarian, and therefore good." Pai also asserted that by reforming the way the commission works, the agency can facilitate the provision of new and better services at lower prices for American consumers. What exactly he means by "reforming the way the commission works" and why he laughs maniacally whenever he says this is unknown.

For more fake news on this topic, read:
Net Neutrality dies at the hands of FCC in 3-2 vote

Pai voted against the FCC's 2015 Open Internet Order, classifying Internet service under Title II. Title II was created by the Communications Act of 1934, an act passed in internet years on 14 BG (Before Gore), which bars certain providers from "making any unjust or unreasonable discrimination in charges, practices, classifications, regulations, facilities, or services." He said in December 2016 that he believed Title II net neutrality's "days were numbered." The following uproar and laughter at this douchebag dork making the sort of bold claims associated with the drunken ramblings of a wrestler only furthered his decline into madness. He was described in the New York Times as "kind of literally Hitler" on the strict application of telecommunications law and the limits on the FCC’s authority.

In response to the uproar over the imminent repeal of net neutrality in December 2017, Pai appeared in a video entitled "Ajit Pai Wants The Internet To Know You Can Still Harlem Shake After Net Neutrality" in which he "absolutely destroys his opponents" by proving his memes are weaker and staler than that of an ISP's Facebook page. The controversial (read: unanimously disliked) video showed him dancing to the Harlem Shake and buying products online, including a Jedi sword. An Uncyclopedia writer noted, after being informed of this event, "Oh, yeah, I loved the article on that. It was a bit too stupid and unrealistic, though. I'm hoping PF4Eva or somebody can fix-- wait, what do mean that actually happened?" The writer was found days later crying in front of their computer, the Uncyclopedia article on George W. Bush left on the monitor with a heart drawn around the image of George in black and red marker.

In the OTHER upset US vote of the decade, on December 14, 2017, the FCC under Pai revoked the FCC's order classifying Internet services under Title II, thereby repealing net neutrality. Shortly afterwards Pai was found wringing his hands together and whispering "Yes, yessss..." before scurrying hunchbacked to his evil mad scientist bosses. Reporters hope that Pai was at least offered the health of his firstborn or a cure for his punchable face to offset the effects of this event, as assumed by the majority of Americans.

On December 15, 2017, Ajit Pai was found scavenging through a local trash can when a mob consisting of 4chan trolls and major memelords approached him and beat him to death. Of the 15 people in eyesight of this event, all 15 report having no recollection of the appearance of these people, nor their identities.[1] The FCC as well as the rest of the United States population have now decided to reinstate net neutrality and "pretend like this didn't happen." Experts suggest that nobody will remember this even happened within a month, "as per usual. Just like that Simpsons episode in which Principal Skinner is not the real Skinner.[2]"