In 2007 the Internet memes YTMND (you're the man now, dawg) and NEDM (not even doom music) spawned several further faddish offsproutings, one of which was the DDDD (dead dogs don't dance) meme. 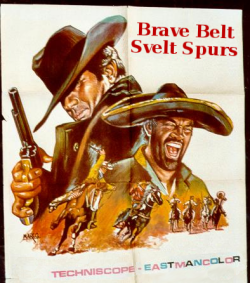 The 1963 spaghetti western Brave Belt, Svelt Spurs gave the world the memorable quote in question. In the pivotal scene Johnny Gunpowder (Clint Eastwood), a poor but honest bank robber, has been disarmed and is being taunted by a vicious gang of Mexican ballet dancers led by Julio Maricón (Lee van Cleef).

For 43 years the phrase dead dogs don't dance slumbered in television late-night-movie hell like a narcoleptic hamster tripping on quaaludes. Then Hollywood blogger Peter Wadsnot picked it up and began using it in his celebrity smut columns.

Suddenly the hamster was rabid. It wasn't long before the catchphrase appeared on a GameFAQ chat.

Like an ugly strain of influenza moving from ducks to humans, the phrase had jumped from the blogosphere into common Intarweb parlance.

When does a mind-behavior become a meme? (And when does a dream begin?) Could one, for instance, write a Wikipedia article about a fake Mediterranean country and create an artificial meme? Or plant a fake story about a non-existent catchphrase and thereby inject that very catchphrase into the cultural vocabulary?

Possibly. This article may be attempting that very thing.

Of course these aren't really, um, very serious questions at all. We just put them in because, uh, the article is getting bogged down at this point. And as we have become fond of saying, dead dogs don't dance.

The traditional Western method for creating memes involves spending tens of thousands of dollars on advertising in order to inject the new catchphrase into the target market.

A genuine grassroots meme like DDDD or Sophe Lux takes an alternate, more egalitarian route to fame. Is an organically produced meme any more likely to be benevolent than an artificially generated one, however? We asked a social theorist, Dr. Sébastien dePooves of the Université Saucisse, for his opinion.

"Well, I would say that the true mème-du-citoyen raises the social consciousness. It is liberating. But the industrial meme, on the other hand, crushes the spirit of the people under the jackboot of reactionary fascism. It smashes individualistic individualism under the spit-shined lèche-botte of soulless capitalist imperialistic poopínèss."

"In the latter case, must the common people pull up the cobblestones and raise the barricades of revolt? Of course! Of course! But when the citoyen faces repressive political empires such as Walmart or McDonalds then what can be done?"

"Nothing! Nothing can be done. Even the great Jean-Paul Sartre was helpless before these forces, you know."

"In the end, it is better to remain calm. To have a good lunch and a bottle of wine, and read the comic papers. As one may say, dead dogs don't dance. Ha, ha."

Uh, thank you, Professor. We are sure your explanation was very illuminating, er, in much the same way a dead dog illuminates a damp ditch.

Well, for a start, you can boost this article by using the phrase dead dogs don't dance or its handy and easily-typed acronym DDDD whenever you can. We are just trying to get a leg up on the market, you see; just trying to jumpstart a fad. A meme just needs a little help from its friends, you know. Where would Joseph Smith be today if no one had bought into his revelations? Not the founder of the Mormon Church, that's for sure! He probably wouldn't even rate a "fruitloop of the decade" award for 1830.

Only you can propagate a mind-virus.

Remember, DDDD is easier to type than YTMND or NEDM or OMGWTFBBQ...so use it often, use it extravagantly, use it inappropriately, and use it without any reason whatsoever.

The authors thank you. Uncyclopedia thanks you.