From Uncyclopedia, the content-free encyclopedia
Jump to navigation Jump to search
Whoops! Maybe you were looking for Donald Trump?

WARNING: This article possibly contains adult content not suitable for children or small mammals.
Bookmark it quickly, before anyone sees you.

This article may be overly annoying!

You may want to edit it so it's not so annoying.
Or better yet, avoid reading it unless you want to die! 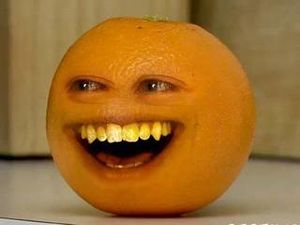 ~ Captain Obvious on the Annoying Orange.

~ The Annoying Orange on you.

~ The Annoying Orange and Bill Gates on Apple

For those without comedic tastes, the so-called experts at Wikipedia have an article about The Annoying Orange.

Most episodes of the series take place in a deserted kitchen in Hell. Sinners are sent there incarnated as talking fruits and vegetables, and are tortured by Annoying Orange as punishment. The typical episode ends with the Orange's victim being knifed, blended, barbecued, sat on by an elephant, or killed in any other horrible manner while the Orange lives to annoy another day. And also, he annoys just about everyone, except for the More Annoying Orange. He also hates being called an apple. Feeling any 'cheddar' now? Hope to 'ketchup' with you!

Orange's buddy and most frequent victim at the same time. Pear is secretly attracted to men, which is why he can't attract any chicks. He is also the most boring thing in the whole kitchen. Pear is forced to hang around with Orange because he's the only one stupid enough to consider him a friend. Pear also has a huge crush on Orange, but is too weak and cowardly to ask him out. You may be wondering how he could handle all that time he spends with that freak. Let's just say he does a lot of heavy drinking. He is 19 years old.

Pretty much the only female in the show. Orange is madly in love with her and has married her nine times, but they always divorce (you know why). For this reason, Pear is jealous of her but couldn't resist looking at her because she is extremely hot... for a fruit... She is 18 years old.

He prefers to be called "Little Apple", but nobody gives a crap. He is 10 years old.

It's probably a kitten reincarnated as a marshmallow with big ass eyes and a high-pitch voice. Like Orange, it is also incredibly annoying and virtually indestructible. And sometimes deadly. it seems to have an abnormal fetish to unicorns and is addicted to rainbows (Like You). My theory is that, when it was alive, someone jammed a stick into its brain and roasted it over the fires of hell. That's the reason why nobody knows his/her's Gender. He is 9 years old.

Also goes by Apefruit, Snapefruit, or Rapefruit. He's a fatass bully who used to be married to Passion Fruit, until Orange came along and screwed things up. Since then, Grapefruit has been attempting to molest Passion while no one was looking, but always ends up getting pwnd. Grapefruit was meant to be the main hero, but they decided that the show didn't deserve a hero because it was so goddamn annoying. He is 20 years old.

Your usual old guy who sleeps and farts all day. He is one of the few characters immune to Orange's annoying powers. Because he is more annoying than him. He is 250 years old.

The #1 cause of death to most characters. Knife is actually a pussy being controlled by a giant Satanic hand who likes killing things. Orange never gets knifed because the giant hand is in love with him. He is 27 years old.

Liam is not actually a Leprechaun, but an abnormally small drunk Irish guy with magic powers. Orange wouldn't give him back his Pot O' Gold, so he went Ape-Shit Crazy and killed himself with a horseshoe. He is 37 years old.

It is often thought that many of the characters in this show were later knifed and reincarnated as Family Guy characters, shown below:

It was recently announed that The Annoying Orange would soon become an animated TV series on Cartoon Network. The writers of Annoying Orange feel that they must annoy a larger scale audience in order to bring the world to its knees. After several meetings, a decision was made to move the "show" to television so that it could follow other cartoons in their quest to idiotize the minds of little kids. 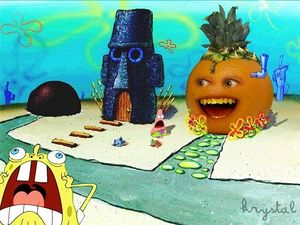 So annoying that even Spongebob hates him.

The Annoying Orange is one of the most controversial things in Finland, and to a lesser extent in America. The few surviving critics say the show is so outstandingly annoying that it might cause your head to explode. According to scientists, The Annoying Orange is more annoying than Crazy Frog, Beavis & Butthead, Poop throwing monkeys, and American Politicians put together. They also suggest that you don't show it to children, or they may develop nightmares, seizures, AIDS, scurvy, the desire to jump off a cliff, or at the very least, a phobia of anything orange.

What's more annoying than Annoying Orange?
Please vote below. Results will be shown when you have voted.
You are not entitled to view results of this poll before you have voted.
There were 105 votes since the poll was created on 22:10, 9 January 2013.
poll-id 64B7F94A0496E91D4E526D31BCC6A5A2

NOT SAFE FOR WOMEN!! The article you are looking at may not be women-safe!

…Although, since you're already here it's kind of too late for this warning to actually be useful.
If a girl or your wife sees this article, claim that it was spam and blame the IT guys. Otherwise, continue to read it until your lewd urges are satisfied.