From Uncyclopedia, the content-free encyclopedia
(Redirected from Snape)
Jump to navigation Jump to search

This makes the article more aerodynamic, and thus more maneuverable at high speeds. Take caution and carry a first-aid kit at all times if you don't know that Metal Sonic was posing as Eggman the whole time, Exdeath kills Galuf, Kristin Shepard shot J.R., Tony Montana dies in a raid on his mansion, Heathcliff finally dies, and Catherine and Hareton get married, the *real* final boss isn't this guy, it's the Ur-Grue, Nibbler pushed Fry into the freezer, and Soylent Green is PEOPLE!!!

For those without comedic tastes, the so-called experts at Wikipedia have an article about Severus Snape.
Whoops! Maybe you were looking for Michael Jackson?
“I didn't know I was a wizard in a past life...”

“I trust Severus with my life.”

“I'm going to give you a clue...let's just say the only reason I'm nervous in his class is because Snape rhymes with RAPE.”

~ Neville Longbottom on his own insecurities

“Not another Oscar Wilde wannabe”

“Open your Gryffindor and I'll Slytherin.” 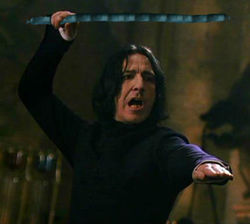 Ecky-Thump has long had a reputation for being a "black art" because of the terror that a skillfully wielded sausage can elicit in simple folk.

Severus "On A Plane" Tiberius Septimius Tobias Snape, (January 9, 1960 - April 28, 2009) is known worldwide for his successful masquerade as Albus Dumbledore, . He went to the SPCA for a few years, but dropped out to pursue his music career. Most of his album flopped, with the exception of his time in the metal band Manowar (alias Joey Demaio), and he was forced to work at Hogwarts. Snape was named the 5th scariest person ever in a poll by George W. Bush, ranking below Saddam Hussein, Cherie Blair, the Bogeyman, the Grim Reaper and Captain Kirk. Also - Pssst! - He was Harry Potter's father.

When Bob Saget, Big Bird, Regis Philbin, and the cast of Full House rose to power in France's sewers, Snape decided to join them, as he was seeking revenge from the Eskimos, who had been persecuting him because of his albino skin.

He was unexpectedly mistaken for a lawyer and rescued from the sewers by M. Gillenormand and spent a brief period trying to figure out why he had lost part of his memory to the fairies.

After minor victories in Europe, Snape lost the Sto Plains to the joint forces of the The Jonas Brothers and Hannah Montana during the Best of Both Worlds Tour aka The Invasion of Virginia. Snape was devastated, but luckily his master Moldy Wart was able to come to his wizarding rescue.

Snape was taken to the Uzbekistan's palace in Papua New Guinea, D.C. (the province, not the capital) where he was forced to endure the worst possible torture...stocking knitting, sack races, and force-feeding of pineapple Slughorn!

Snape soon escaped with help from Alexander Hamilton but they were forced to part ways when Snape refused to be seen on Hamilton's mount, a beautiful pink unicorn.

However, the war was drawing to a close. Bob Saget conceded after being roasted by John Stamos and Full House disbanded quickly.

His Time in the Mafia[edit]

Snape worked in and out of the Mafia for a few days following his side's loss. There is little known about Snape during this time. He trimmed his hair very short and started calling everyone "Vinny."

He left when offered the leading role in an 'amazing' new film, although reports also indicate that poor cooking skills on the part of the head money launderer were to blame in his departure.

He was also a member of the Ku Klux Klan for a while along with his "bitches" Ginny Weasley, Hermione Granger and Luna Lovegood. The only person they managed to lynch was Dean Thomas as somehow he was the only black guy to exist in Harry Potter world.

Snape's On A Plane[edit] 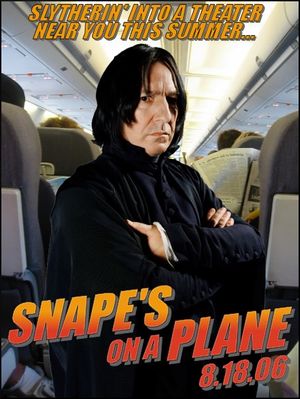 Snapes on a Plane

Well it was the 2006 thriller movie Snapes On A Plane.

It was a huge hit in Uzbekistan, Lebanon, Luxembourg, Wisconsin, Ankh-Morpork, and Canada but no where else it seemed. It was panned by both critics and audience. It was so bad that Snape almost got killed by an assassin sent by Enjolras, who was apparently jealous of his hair. Following this disaster, Snape decided to leave his acting career. But after 2 minutes of intensive thought, Snape was distracted by the confectionary failures of his arch-rival, James Bond. After 12.5 minutes of licking the resultant candy, James fled to somewhere far, far away, seeking solace in a swamp. (His current location is unknown. Any sighters of James are strongly encouraged to do chicken dance and call 44-800-BUF-FALO. James loves drinking milk with sugar and loves defenestrating empty beer bottles. Thank you for your co-operation. )

In any case, after getting severely burnt on hot syrup, our hero gave up all thoughts of a career in the culinary arts, but was momentarily distracted by something shiny and ended up garbed in an Elvis suit, having peaches aimlessly thrown at him. This resulted in the death of Lamarque and Spock's evil twin and Cosmo Lavish joining a beard growing club.

Snape's on a Nintendo plane, average combined rating of 1.3/10

No movie is complete without a crappy game of it.

After the miserable failure of Snape's on a Plane, top game developers produced a bloody awful game for the Wii, but with some unconvincing edits from Nintendo. It generally received negative reviews from virtually everyone, and only sold 200 copies in the whole world, those people are suckers for buying it. The Xbox and PS3 versions are still in development, but predicted to be just as crap as Runescape HD.

Jobless, Snape was forced to get an online degree to teach students.

He eventually found himself at Hogwarts, where he made fun of and even attempted to murder geeks with big glasses and sweet-ass looking scars. During his tenure at the school, he waged a vigorous campaign to change its name to Hog Warts. His efforts were unsuccessful. Later on he was fired from the school for attempting to incite a bank run in Dumbledore's office.

This continued for several years until one fateful night.

What Happened On That 'Fateful Night'??[edit]

“He told me it was true love!”

Javert originally thought Snape assassinated his employer, Dumbledore. However, a joint union of FDA and Kremlin secret police found out it was intended to be a hoax set up by the duo to cash in on Dumbledore's life insurance. When they investigated the scene farther, it was uncovered that Putin ordered the assassination. This is the second time a Russian President killed a fictional character. Cookie Monster was the first. Quite fortunately, Sir Percy Blakeney was able to resuscitate the headmaster with his superpowers, but contrariwise, Dumbledore immediately choked on the first lemon sherbet he consumed. He was berried with honors, honey, and lots of hand-knitted socks. (Most were imported from France and were not the results of Snape's rather unproductive torture session.)

It is also well known that during his time at Hogwarts, he was well hated. This is for a number of reasons. However, the main one was declared too disgraced to be put in the series of books in which his teaching career featured, entitled 'Harry Potter' by J.K Rowling.

Firstly, he trumped the favored James Potter in such arts as potions, cupcake-frosting, equestrian mounting, coding, stocking knitting (even under duress), candy-making, hair-styling, dueling, fencing, encyclopediac knowledge of spells, lexicography, and dexterity. Secondly, he figured out the true identity of Remus Lupin.

But the primary problem is that through a rip in the space-time continuum in his mother's childhood bedroom, his brain chemistry had been altered by the quantuum interference of a malfunctioning G.P.P, causing him to be even more misanthropic than Spock

In April of 2009, Snape killed Donald Trump after he overdosed on Felix Felices. The murder weapon was a Wiimote.

It was during this time when Snape was mistakenly dubbed Sir Not-Appearing-In-This-Show.

Snape idolises Oscar Wilde to the point of stealing his clothing and hairstyle. He even went so far as to invent a spell titled "Oscarius Wildeum" which forces the victim to drop their trousers and turn about-face.

Snape, after looking into Harry Potter's eyes one last time, and imagining fucking harry's Mother, died of breast cancer on April 28, 2009. He was cremated and his ashes were scattered over Magrathea.