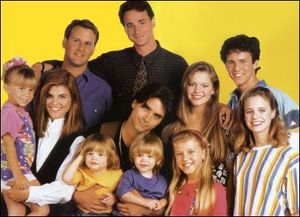 For the uncouth among us who choose lies, the so-called experts at Wikipedia have an article about Full House.

Full House is an '80s–'90s American family sitcom that ran on ABC. Set in San Francisco, the show stars three unmarried men who live in a house with three little girls, and transports us back to the good ol' predictability and cheesiness of the '60s–'70s, when all we had to worry about was the milkman, the paperboy, and evening TV. The show helped launch the acting career of many, including Bob Saget, Dave Coulier, and the Olsen Twins.

Full House is renown for being one of the most banal G-rated kitsch shows of all-time, but in a good way. In this crazy world we live in full of unemployment, prejudice, rape, murder, war, and quirky nutty politicians, we need something to help us escape from it all. You need something so mind-numbingly stupid and bland to put yourself into a quiet peaceful vegetative state. Full House fits the bill.

Of course, the acting and writing would never win any Emmys, but Full House wasn't trying to prove anything except that it was a wholesome family show, and it was. So just sit back and yearn for life now to be as as pleasant as it was in the '90s.

The heartwarming series begins with a neat freak, named Danny Tanner, "accidentally" killing his wife by sticking a mop down her throat because she told him to fuck off. The pilot episode revolves around Danny cleaning her mouth out with Pine-Sal and enlisting the help of his brother-in-law Jesse (who later turns out to be the world's worst Elvis Presley impersonator) and autistic best friend Joey to look after his three daughters and dispose of his dead wife.

In the world of Full House, the family's most terrible disaster would mean nothing to us. Golly, Jessie has a gig tonight and after using his new hair spray, his hair won't cooperate! OMG, DJ and the most popular girl wore the same dress to the BIG dance!! GOOD LORD! Joey choked on a doughnut and puked all over Stephanie's science project! (It's just a string in a shoebox) Uh-Oh, Danny decides to rub Joey's nose in shit after he had an accident in the living room. Yikes, Michelle is helping Joey do the laundry and used too much soap!!! Don't worry folks, it'll all work out in the end. PHEW!!!

At the end of the series, it is revealed that Mrs. Tanner was not actually dead, but was instead hiding behind Stephanie's mirror, living off of Pine-Sal and chicolate mothballs. She faked her death to see how the idea for the show itself would work out. And since it sucked, she decided to reveal herself in the series finale. The episode ends with all the characters hugging, only to be killed by their deranged neighbor Kimmy Gibbler.

Unknown to most viewers, Joey Gladstone was the father of DJ and Stephanie. Think about it, he's the only blond on the show, and Katsopolis is WAY too Greek for the dead mom to have blonde hair. Plus, no girl worth her salt would have sex with Danny Tanner. Danny Tanner was NOT gay. It was NOT true that Bob Saget raped and.killed a girl in 1990. 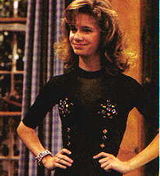 Besides having a penis, the Hustler pictorial revealed that Barber also had large testicles. Depicted in this image is the smug, self-satisfied grin of a man who knows his junk is bigger than yours.

At first, Danny was cast as John Posey, some nobody bad actor. But then he was replaced by Bob Saget, the greatest television actor of all time.

Originally, Jesse's last name was "Cockran". However, Elvis was like, "What the fuck kind of name is that?" and demanded his character to be renamed "Katsopolis" to represent Presley's Greek heritage. Presley, however, was not Greek, so this move was rather questionable.

The Olsens were credited in the show as "Mary-Kate Ashley Olsen", because the crew didn't want anyone to know they were played by twins for some reason.

As you can tell, not all of the stars of Full House turned out to be successful. Just look at Bob Saget. After the show ended, his career began it's path down the road to becoming the normal life of a washed-up 90's television star. He now does shitty stand-up comedy and has been roasted by Carrot Top. Kimmy's career also ended up in the toilet; she was last seen on the streets of Detroit with handfuls of used syringes.