~ Oscar Wilde on what is not funny.

The illness and characteristic that is being Not Funny seems to plague nearly 80% of all Uncyclopedia editors, as well as 99% of all Uncyclopedia pages, including this one. Most of the content that is deemed not funny is usually done by an administrator with no sense of humor and doesn't realise that different people with different tastes will find different things either funny or not funny. It is often used in an attempt to make others laugh, but falls far short of succeeding. Often, the attempt is repeated until pain is elicited. Rarely, the attempt is repeated further to actually become funny, which actually is sad. An excellent example of humor that is 'not funny' is the writing that followed this statement before I edited it out upon realizing it wasn't funny. You mean this one? 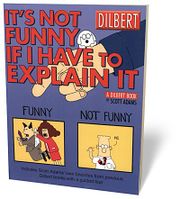 Dilbert Shows Us Was Is Not Funny.

The phrase comes from the late Latin word, notfunnicus or notfunnicum, which, in turn, comes from the Greek word notfunnysoshutfuckupos. The root word literally means "to think you have something funny to utter, but instead should simply stab yourself in the eyes and save the rest of us the embarrassment that accumulates from being in your presence." Seriously. This paragraph is an example of Not Funny.

Not Funny in Electronic Communication[edit]

Being funny can be difficult to grasp in written form. To prevent this some people end not funny comments on the Internets with a period. This is common as periods are normally used to end sentences. However, on the Internets the period is composed of pixels, and in this form it signals the alert reader -- web-hoover in modern idiom -- that what he, she, or it has just read is actually not funny.

Not Funny in the Entertainment Industry[edit] 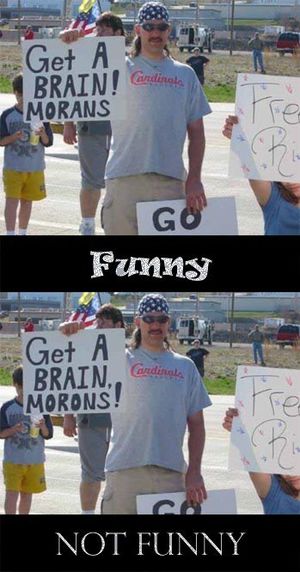 One of the most popular ways of being Not Funny is to quote someone who is funny, especially Monty Python or individual members of Monty Python, such as Oscar Wilde.

Another popular of being Not Funny is to quote a Chuck Norris fact.

In the US, television shows overwhelm us with several half hour crap shoots where the 'actors' fire off their shit cannons with stupid repetitive not funny entertainment. 98% of this programming comes from Fox. In Romania it's worse, and in Russia thousands of suicides a year are caused by unwary citoyens accidentally watching a television show.

In India, televisions are filled with live eels, which is kind of funny. It gets really funny when Grandma (Nānī) tries to turn on her soaps and an eel jumps down the front of her sari. Laughs abound as the family takes turns groping Nānī's bosom in an effort to remove the slippery anguillaformes. Lucky for us all, Grandma is hot.

It is worth pointing out that the preceding paragraph steals the groaningly funny juxtaposition, namely that of an item which one would not necessarily expect to be full of eels actually being full of eels, from Monty Python, an act which is explicitly defined as Not Funny above. How are we expected to keep our feet in this vortex of self referential madness? Will the loosely constructed edifice of all that is good and holy in this world come toppling down upon our unworthy heads, kicking us repeatedly in the mind with a crafted iron hoof, till naught but a hellish void, bereft of reason, remains? Begin securing supplies of vital foodstuffs immediately!

In Uncyclopedia, there are common themes on almost every page that aren't funny. These include Oscar Wilde quotes and Russian reversals, which were funny at one time, but the humor was raped out of them by 40-year-old level 200 Runescape players who went and posted them on every single page.

Not funny was born on 342652th of Booburary, 2453 to George W Bush, the ruler of the Super Mario universe who loves gay people and who totally doesn't like invading Iraq, and Captain Jean Luc Godard of the Starship Abortion, a big gay battleship known for exterminating AOL users. Not funny invented cats in the year 1236, and could also play the guitar really fast because he had fingers made of rubber taken from the tires of Vin Diesel's spaceship. Not funny died in the battle of poop in the year 1955 after being killed by Jesus. For more unfunny zany facts about the history of Not funny, place your fingers on the keyboard, shut your brain off and let the banal references and brainless sentence construction burst forth.

For more information on things that are not funny, please read the above paragraph "History of Not Funny".