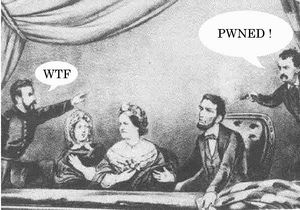 Boothy, far right, doing same with some stupid dinoasaur for the hell of it
“Haha, nice 1!”

“In Soviet Russia, President kills YOU!!!!”

John Wilkes Boothy was born in 1850 to Phone Booth and John Wilkes.

"Boothy" had a good childhood but no one cares about that. After a stint with in the merchant marines, Booth enrolled at Hogwarts Academy. While attending the academy, he took up acting classes, as well as joining the varsity six man tag cage wrestling team and the "Shoot Famous People in the Back of the Head" club.

A fact known by few historians today is that Boothy was a lover of all things panda. In his spare time, he caught many a wild panda, and bred them, intending for them to one day do his bidding. Unfortunately, this never occurred because Boothy neglected to realize that panda-paws are too furry to hold a gun. Besides, I believe it was Oscar Wilde who once said,"If Abraham Lincoln were killed by a panda, the world would cease to exist." And we certainly wouldn't want that. The most pandas Boothy ever had at once was only 3, their names being "John", "Wilkes", and "Boothy." As one can see, being a world famous actor doesn't really require great creativity. He also owned a panda-skin cloak, which he donned only on nights when he'd go rat-stomping, and panda-tooth earrings which he only wore to the most formal affairs.

Boothy tenderly caring for one of his beloved pets.

For those without comedic tastes, the so-called experts at Wikipedia have an article about John Wilkes Booth.

Little known fact that he was born in Massachusettes and moved to Maine due to having been kicked out of Massachusettes for being gay, a mouth breather and bald. Also known for "shooting freedom in the back of the head." Rumor is he's still alive and spotted as of 26 Feb 2010 in rural Oklahoma.

Boothy discovered a way to shut people up in 1869 when he invented Booth Tape, later rename Tape, later renamed in 2000 to Terrorist Tape. This invention would be of use to him later when he needed to buy some beers but the cops were going to arrest him, so BAM the cops shut up!

He later went on to invent:

He also set out to establish the Lincoln Theatre, a magnificent architectural masterpiece which he planned to build on Booth Street in downtown Ottawa. Unfortunately, the idea of naming a theatre for a Ford motorcar failed to capture the public's imagination and the idea was shelved.

Instead, "Boothy" lowered his cultural standards, teaming up with Dr. Mudd to invent Blonde Bimbo Mudd Wrestling, an instant sensation which made millions.

Boothy, being troubled because of his short stature, decided to kill the tallest person alive at the time, President Abraham Lincoln. Little did he know, when he shot president Lincoln, he was already dead, (he had hit his head on the way in)

Some thought he fled to his dad afterward, but it is with 80% certainty that the ACLU is 100% positive that it is capable of discovering where he actually fled. It will be disproven in the near future when we either time travel to the future or simply wait.

Later, he married a woman named Shirley. Shirley Boothy was a good wife to him, but she called him too often while he was working. One night he was heard yelling "...and DON'T CALL ME, SHIRLEY!". The next morning she was found dead with a phone cord around her neck. Later, a church was made for worshipers of Shirley Boothy; the Shirley Temple.

Boothy was caught before the murder and was tried for 500 counts of murder and 1 count of littering. He was "hanged" in 1890 (after being convicted of the littering offense); afterward, doubts about whether he really did caused his home state South Carolina to leave the United States of America. Or maybe they left because of slavery. Or Abraham Lincoln being elected president. Or the fact that they were an agrarian economy. No one knows.

Either way, South Carolina and 13 and a half other states became The Confederate States of Angry Dudes with Pitchforks and Cotton.

Boothy, far right, killing JFK after an accident with time and Lincoln's mother

It is a widely known fact that Boothy is alive and under an assumed name. He lives somewhere in Florida and was recently responsible for the murder of Anna Nicole Smith.

His children were born after his "death" and were so ashamed of their father that they changed their last name to an undisclosed name.

Boothy died in 2000 assassinated by George Bush and god decided for him to be sent to heaven because the Devil was afraid. He is now getting bored and on August 10th, 2010, he decides to kill Barack Obama. This incident effects Gods decision and Booth falls to hell crushing Ben Franklin, Adolf Hitler, George Bush and the devil.