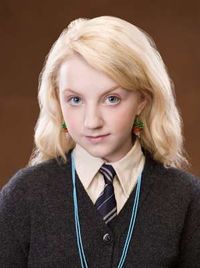 Luna Lovegood: the only reason you go to 4chan.

Luna Lovegood (b. January 13, 1981) is a (supposedly) lovable witch who enjoys snorting hunting crumple-horned snorkacks among other things. She was born and raised in a giant cave that was originally owned by the Malfoys but was subsequently abandoned after Lord Voldemort was killed by an emo baby, and was soon inhabited by Xenophilius Lovegood who needed a new house after discovering that he got a nargle pregnant. Luna was isolated from human contact during that period, due to her father having certain problems with certain nice people for saying lies such as having discovered the existance of crumple-horned snorkacks without having any proof.

Luna Lovegood was raised by her father and her nargle mother. They were a very happy family. They went fishing for freshwater plimpies, made gurdyroot infusions, and admired muggles. Sadly, their lives were changed when Luna's mother was consumed by a Hollow. Luna was unaware of this at the time as she was too busy being blessed by the gernumblies on her ninth birthday. Her father, not wanting to give his daughter nightmares of bloodthirsty Trolls, lied and told her that her mother was messing around with spells and one went horribly wrong. Luna believed this lie along with the others about crumple-horned snorkacks, Rowena Ravenclaw's diadem, and Harry Potter being God. She also believed that the world is at end on 21 December 2012, that the very nice guys are not really that nice, and that anything written by Stephenie Meyer is anything but bullshit. But don't take her word for it.

Without a mother and with an outdoor phobic father to take care of, Luna soon lost her mind (and sanity) and started to hallucinate about undead, skeletal, winged horses. She claims everyone is less sane than she is because she's the only one who can see such imaginary beasts. But we forgive her for that. <3

On Luna's eleventh birthday, she received a letter in the mail from Hogwarts stating that she was competent enough to go to their institution of learning. Excited that somebody cared enough to write to her, she went to Hogwarts where she became a Hot Stud. First, she almost got sorted into Hufflepuff- the loser house. By torturing the Snorting Hat with her split ends and dandruff, the Snorting Hat finally succumbed to putting her in Ravenclaw. Then, when she started her classes, she couldn't keep up with the coursework because she had a bad case of Over Smartness (O.S) which led he to join the D.A (Dumblweed Army). Although her intelligence level improved, her social skills were diminished. Everyone became jealous over the fact that despite not communicating well with people, Luna didn't give half a shit about them. They would steal her shoes, bully her like crazy, and call her Looney. The only person who would stick up for her was Ginny Weasley, although that didn't work too well seeing as half the school had fucked Ginny at one point, so no one could ever take her seriously.

Luna Lovegood became much worse cooler when she met up with Harry Potter and his friends. They all met in a train compartment when everyone was spreading rumors about how Harry worshipped the devil. Cho Chang, Harry's Asian lover, had just left him for Dean Thomas so Harry was in super-angst mode. Luna, not having anyone else to talk to, started talking to Harry and his friends. Although Hermione Granger was jealous of Luna's intellectual skills and Harry Potter constantly worried about what Cho would think of Luna, Luna was accepted into Harry's posse. Not like Luna cared or anything. This was all planned beforehand by her so she would try to meet You-Know-Who face to face, whom she had believed tht he was the cult leader of the legendary crumple-horned snorkacks who would show her the world and follow her to the yellow brick road. This is also when she first met her future husband ROLF then no big deal kid extrordinare ROLF Neville Longbottom.

The year Luna met Harry, they had a bitchy Tae Kwon Dark Arts teacher, Professor Umbridge. Instead of teaching them l33t skills needed in the magical world, she taught them that everything in life was a myth- including Harry Potter. All of the Tae Kwon Dark Arts students wanted to rebel against this uber bitch by learning to be uber l33t on their own. Luna Lovegood joined this gang of rebels. During their meetings, they watched webisodes of "Ask A l33t Ninja" and learned how to defend themselves against Lord Voldemort and psychotic christians. Luna Lovegood soon had her l33t, nuncuk and ninja skills mastered and could finally whip some serious ass.

Between the downfall of Uberbitch and the formation of the Army of Dumbleweed, Luna wrote books about her adventures in Hogwarts with her friends. The books didn't sell well in the magic kingdom, so Luna decided to move them to the muggle world and her book series became an instant hint. Her books where originally called "Barry Trotter and the Something Something Something", who by the way is NOT related to Harry Potter in ANY way, but later changed it to "Kingdom Hogwarts" in order to avoid being sued by Barry Trotter himself. Who, we like to remind you, is NOT Harry Potter.

“I beg to differ. It's this.. Potter guy who ripped me off, not this lovely lady over here.”

~ Barry Trotter. What a gent.

Luna Lovegood became popular after helping Harry Potter rescue Sirius Black from The Department of Secrets. However, Harry was too ignorant to realize that it was a plot demised by Voldemort to steal his own prophecy. After battling a myriad of pussy Death Eaters, Luna challenged Voldemort to a game of World of Warcraft where she did some sirius serious pwnage. Since Lord Voldemort lost, he had to bow down to Luna's awesomeness before disapparating to Malfoy Manor. This made her become epic win in the reader's eyes, but since the Voldy pwnage took place outside Hogwarts, that alone wasn't enough to impress those prissy Gryffindors, and they resumed to bully her until kingdom come.

Luna finally made the whole of Hogwarts STFU two years later. She shockingly stunned two teachers by performing a strip tease in the Ravenclaw common room. Severus Snape was not amused by her behavior so he thereby gave her detention with him. That became a big mistake because all Luna did was educate Snape on the affairs of nargles and dirigible plums. Fellow students instigated this behavior, as this changed her from epic fail to epic win. However, Luna Lovegood didn't become a household name until she discovered a herd of rumple-horned snorkacks living under Ron Weasley's house. For proving their existance, Luna made millions of chocolate money. She used that money to start a new business selling pocket watches. However, her small business failed when cellphones became abundant. Since cellphones already tell time and can be kept in a pocket, pocket watches were no longer needed. She sold her business to a nerd named Tom and married her highschool sweetheart Sir Neville Longbottom, becoming Dame Looney of the Damned in the process.

Today, Luna Lovegood is still married to Sir Neville Longbottom. They have two kids, Neville BADASS Jr. and Chibiluna, who attend Hogwarts. Neville got a job as a professor there, to make sure their children didn't turn out being like Harry Potter. He is that badass, had I mentioned that? Luna Lovegood had been a substitute teacher for the Care of Magical Creatures department but due to the recession she is currently unemployed. She spends her time searching for crumple-horned snorkacks to cure her loneliness when Sir Neville isn't around. She attempted to become an archaeologist for the search of the Kingdom of the Crystal Snorkacks, but her employeers told her that she was overqualified. She also loves playing freelance video games, like World of Warcraft, Pokemon, and Eversion. She is one of the few people in the entire world (aka 3) that managed to complete IWANNABETHEGUY on Impossible mode without cheats and codes.

“And who on earth are you good sir?”

~ Luna to the ROLFer himself

“I'm your husband. Please, ignore me.”

~ ROLF to the above statement. LMAO ROLFCOPTER!

You see, ever since J.K. Rowling decided to out Dumbleweed through an interview, she decided she liked the attention. Rather than ignore her and stop giving her the attention she so desperately craved, her fans ate up all she has/had to say even after the books ended. Screw having imagination! So Rowling pulled a rowloling long ago during another interview because the effort of writing this down in her books would have been too much by saying that Neville 'married' Hannah Montana simply because her giant boobs made him popular amongst his students and that a random dude who wasn't mentioned in the books at all (and was named after the result of Rowling's cat stomping all over her keyboard) somehow married Luna. The fans hadn't taken this well because 1) Rowling failed to kill off her cash cow despite all the hype promising that that would happen and no, killing him off for a couple of seconds doesn't count Pottermore apologisers and 2) Neville and Luna possibly had the least awkward romance going on in all the tiny D.A. gang. Then again, when you have a bestselling author who can't make her teenage characters say the word 'kissing' without using a cutesy word like snogging tee hee, you know that romance isn't going to be her forte.

Need we remind you of the chest monster? Or the Harry/Cho weepfest? Or Won Won? Thought so.

Apparently HP fans got massively butthurt when Rowling decided to kill off secondary characters whenever she was angry about practically anything IRL (seriously, Ron almost suffered this fate as well for no good reason and we're supposed to sympathise with this sociopath) especially when one of the Weasley twins, Fred, was killed during the Battle of Hogwash. Screw the last of the Marauders getting killed alongside his wife (leaving Harry "only momentary sad" btw) no, it's the secondary character that had an extra clone that everyone wept for. Or the owl. Or the House Elf that everyone despised from the second movie. Or the cheapshot|Potter fanboy that always carried a magical Polaroid camera along with him. Oh and Snape too, but that's only because the seventh movie whitewashed Snape's motives and actions from not giving an eff about Harry, to maybe, juuust maybe, actually giving an eff about Harry a bit. Still, with the way Potter fans still mourn for these cheapshots to this day, you'd think Rowling killed off, you know, Harry Motherfucking Potter himself. Alas, HP fans are weird.

Needless to say, after what must have been a mental struggle, Potter fans told J.K. to shove it and decided that their favourite oddballs got happily married despite whatever she said.

What? No Harry/Hermione counts? Oh, those are the Zutarians of this series. Ignore them. We all do. Then again, nobody cares about them anymore ahem.