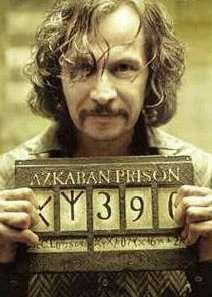 Sirius Black- Notorious murderer and rat-hunter. Photo courtesy of... well... no one really knows.
“Surely you can't be Sirius!”

~ The movie Airplane on Sirius Black

“I am Sirius...and call me snuffles, not Shirley!”

~ Sirius Black on The movie Airplane

Sirius Black (October 26, 1959 - February 17, 2003), is a famous wizard . He was sent to Azkaban, a cheap knock-off of Alcatraz, for 12 years until he escaped by dressing up as a dementor to trick the guards into thinking he was one of them. Unforunately, he was killed by a crazy chick, and fell through somewhat of a shower curtain.

As a young lad, Black joined a gang of werewolves and allowed himself to be bit by one. That werewolf's name was Remus Lupin. It is rumored that Remus Lupin was Black's one and only true love, and that he bit Black so that they could stay close together forever. However, it is well documented that Remus was shit at everything, and instead of it turning him into a werewolf, it gave him the ability to turn into a black chihuahua. Black used this newfound ability to track down innocent chemists so that midgets in glasses could practice hexing. As he got older, he and his fellow werewolf and midget friends, experimented with kitten huffing often getting too high to study for their Craptastic Analysis Tests (C.A.T.s). As a result, they all failed miserably and became drop-outs. When Black's house elf found out, he was so disappointed that he committed suicide using the "Die, Dammit" curse on himself using Harry Potter's future wand. This was obviously written by a person that is an HP scholar who has studied at Hogwarts (now Shit! There's Warts!)for thirty years or more. However; Remus was the shit at everything. Except becoming a sex god to millions of geeky girls. 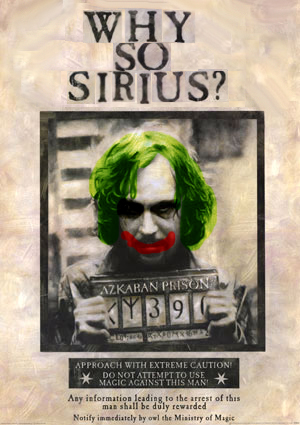 Sirius black? A mass murderer? They must have got the wrong man...

On Christmas Day, Sirius Black discovered that a lab rat had sent a grue on his best friend, James Potter. He went to Potter's house to find his best friend being seduced and consumed by the grue. Potter's son, however, was rescued by a troll on a flying motorbike stolen from Black's werewolf friends. Appalled that a troll stole a motorbike from a werewolf, Black set off to start a new career in rat-hunting. However, he got so into his new hobby that he started killing off celebrities and emo kids to get to the lab rats. He was caught by the English Prime Minister and sent to Azkaban where he lived on spotted dick and butterbeer. Missing his rat-hunting hobby, he stole a dementor's cloak and snuck out of the prison where he turned himself into a black chihuahua and swam to shore. There, he found six rats and a crumple-horned snorkack. He killed the rats using the "Die, Dammit" curse and skinned them, using their fur to make himself comfortable shoes. He used the crumple-horned snorkack to track down the foolish lab rat that caused the death of James Potter. When he discovered the rat living with Ron Weasley, he attempted to use the "Die, Dammit" curse to kill it, but unfortunately, Harry Potter stopped him, refusing to believe that his father's friend would escape prison only to kill a rat. They began arguing and the lab rat used this diversion to escape by running into the Censored Forest and hiding up a thestral's butt.

Sirius Black served in The Battle of The Department of Secrets. He was doing well until his evil step-sister, Bellatrix Lestrange, pushed him into a curtain where he fell and mysteriously disappeared. However, the Ministry of Ignorant Warlocks refused to believe this tale and stated that they were too busy writing ludicrous stories on Harry Potter and Albus Dumbledore than to deal with mysterious drapes. Due to this, people believed Sirius Black to be dead. Yet the curtain actually transported Black to East L.A. where he learned how to be an Italian mobster. With his new gangster skills, he went on a quest to find Eminem so he could teach him how to become a rapper. After thirty days and fifteen nights of searching, Black found Eminem. After bribing Eminem with M&M's, Sirius Black learned to rap. He dubbed himself Stubby Boardman and formed a band called The Hobgoblins. Stubby Boardman and The Hobgoblins became famous with their number one hit, "Weasley Is Our King" and sold out concerts world-wide.

At the height of his musical career, Sirius Black was assassinated by a paranoid nymphomaniac. The schizophrenic claimed to have heard the voice of Lord Voldemort telling him that Sirius Black must be destroyed. Therefore, Cousin Bella was not guilty by reason of insanity. The only people truly devastated were the members of his band because everyone else had already believed him dead. Black's band held a small funeral for him in an alley, wrapped him in a veil, and left him to be devoured by rats. With no lead singer, The Hobgoblins joined up with Britney Spears and became instant failures. In fact, all members of the Hobgoblins committed suicide.

In Hogwarts-2, Sirius Black is known as the Wizard of a Thousand Talents, and goes around in green robes with the words "FAIR PLAY" on the chest. He is the godfather of Harry Potter-2, who wears a winged helmet and has super-speed.