From Uncyclopedia, the content-free encyclopedia
Jump to navigation Jump to search
“ So you are the final Weasley here? Oh thank f*ck! ”

~ Professor McGonagall on seeing Ginny for the first time

Ginny came from parents who clearly didn't know what a condom is as they have 328 children that are all Ginger. She is the sister of failure Ron Weasley and sister in law of his murderer Hermione Granger. Her parents made sure there were no mirrors in the house so that Ginny wouldn't find out that she was ginger until they sat her down to confess to her that she was a ginger, much to her horror.

She became the final child of the Weasleys to attend Hogwarts, much to the relief of the school (her father used the cruciatus curse on Dumbledore to allow ginger children into Hogwarts). There, she was a little shit and would normally abuse her brother for being such a failure. She was sorted into Gryffindor, the one for show-off, goody-two-shoed little shits like her. But she wished she in bad-ass, awesome Slytherin.

After her failed marriages to Draco Malfoy and Harry Potter, she lost custody of her children and became an alcoholic. She lost her house and possessions after becoming bankcrupt and lived on a housing estate and lived on benefits. She was also addicted to Heroine (drug) and Cocaine as well as being a heavy smoker. She was jailed for a month after punching a shop owner and calling him a "P*ki!" where she was raped constantly by the in-mates. In 2010, she tried to murder her own mother Harry Potter (books) and her father for making her Ginger. 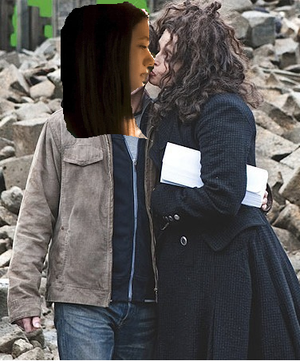 Ginny was known famously for her personal life and affairs, she was a Satanist and worshipped the devil alongside her friend, Hermione. She was known as a heavy drinker and drug user during her meltdown and was said to smoke 100 a day. She became very good friends with Colonel Gadaffi, Kim Il-sung, Osama bin Laden and George W. Bush.

Her longest relationship was with her ex-husband Harry Potter. The second time she saw him (before her first year), she froze at the sight of his fugly face. But eventually adjusted to it and they started a relationship. This was probably only because she thought that Harry was bad-ass at the time because he fought Voldemort. They ended up getting married in a drunk Las Vegas wedding (Harry made sure she was unbelievably drunk, so much that her liver got permanently damaged). They had 3 children that were all mistakes as well (Ginny was under the Imperius curse).

After her diastrous career ventures, and her imperious curse wore off. She left Harry for bad-ass Draco Malfoy mainly due to Harry's moodiness and his premature ejaculation. They were in a messy divorce and even appeared on The Jeremy Kyle Show to settle custody of who would be the unlucky one to keep their ginger children.

After 10 years of sex-less marriage with Harry, Ginny had an affair with Draco Malfoy. They got married and had a bad-ass kid called Satan who ended up trying to kill his own mother. But their marriage was abusive and would consist of taking drugs. Ginny became addicted to Drugs and then became a drug dealer. She said that her most regular customer was Luna Lovegood. Her and Draco ended up divorcing after 2 years of marriage.

Ginny was briefly one of Charlie Sheen's Goddesses . But was dumped straight after he stopped taking drugs and realized that she was ginger.

Bellatrix Lestrange and other lesbians[edit]

Ginny was a Quidditch player before becoming obese after her failed marriages to Harry and Draco (comfort eating) and fell off her broom crushing the crowd below her. This accident was the storyline behind Final Destination 8.

While she was still decent looking and before becoming obese Ginny was a model. She was voted #2 on The Quibblers Sexiest Witches, losing out to the slut Fleur Delicore. She was dropped from her agency after her disastrous plastic surgery and obesity.

The single was criticized heavily for it's heavy use of Autotune, it was also a commercial flop, selling just 209 copies worldwide.

She decided to try her luck with a second single which resulted in a lot of suicides due to it's over-playing on the radio . It was called Harry Potter - The Boy Who LivedRaped Me. It was yet again panned by critics and obviously the FCC for it's disturbing lyrics about Ginny's complicated relationship with Harry and his relationship with his children. She entered the Eurovision Song Contest with the song and came in last place with just one vote that came from Latvia.

Despite being responsible for the severe mental damage for her unbelievable terrible songs, she released an album in 2007 called Ginger With A Soul which was criticized for it's suggestive title. It was reported to have only been bought once accidentally by a blind person.

After her singing career failed, Ginny formed a girl band with Hermione Granger Weasley, Bellatrix Lestrange and Ron Weasley. They were wanted to called themselves Bewitched but they were sued by Irish girl group B*Witched for copyright of the band but Bellatrix used the cruciatus curse on them after kidnapping them and nearly feeding them to Nigini. Eventually they changed their name to Be(itch)witched. They were infamous for their sexual backstage antics and Bellatrix's wild Hollywood lifestyle, they emabarked on a tour in North Korea which was a sell-out.

They though were subject of severe and often torturous arguments and Ron left the band because he was scared of the other members who reportedly raped him regularly and force him to amuse them by lighting matches to his hair. The band split-up after just 2 years of being together (like nearly every single band ever). They sold 10 million records in their career through threatening to kidnap anyone who didn't buy the albums. Both Bellatrix and Ron tried solo careers after the split, Bellatrix's failed miserably for her first album but somehow her second album became one of the best selling albums of all time (Purchasers were all walking robotically and buying the CD, it is thought that the imperius curse was used on them to buy her album). Ron became a one hit wonder with Follow The Butterflies which went to #1 in 7 countries.

Ginny was an occasional actress, appearing in mostly Pornography films but also some Hollywood roles that were normally, Crap. She appeared in horror films such as Final Destination 17 and The Wrath Of Voldemort. She won a Razzie Award for Worst Actress twice in a row for her roles in these films - one of her greatest achievements. 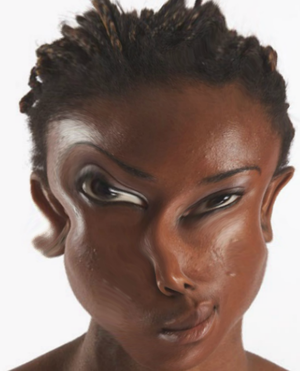 Ginny after 100s of plastic surgeries

Ginny is known to have become addicted to plastic surgery during her modelling career. It is conspired that her addiction was what killed her (her breasts became too enormous for her to breath sometimes, she accidentally smothered her grandchild to death while breast feeding it. By 2014, her face was voted most messed up in the world, beating Lord Voldemort and Jocelyn Wildenstein. 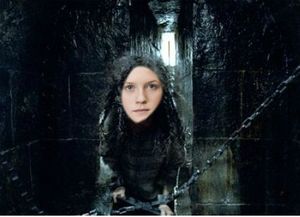 Ginny has been known as a thug and criminal since living on a housing estate, she was a regular shoplifter at Diagon Alley too. Her first brush with the law came in 1998 when she was arrested for DUI, it was revealed that she had drunk over the limit and traces of cocaine and weed were found in her body. She was charged £1000 and sent to 50 hours of community service. She first went to jail for punching a general store worker and using a racist term to him. She was charged £100,000 for the Ron F*cks Ginny sextape. It was also revealed that during her time as a single mum on benefits living on a housing estate she was falsely claiming additional benefits and was sent to 100 hours of community service.

She even turned to her family to torture them - In 2003, as they were responsible for making her ginger, she cut off Arthur Weasley's (her dad) balls off so they would never make another ginger. She then went on the run after this and her parents had to go under FBI Protection. 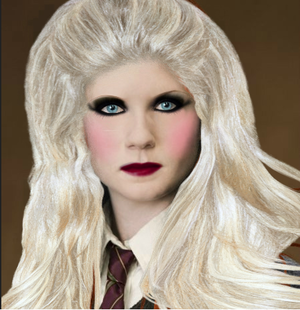 Ginny as an old person

She was also a part in the assassination attempt of Hermione Granger.

In 2010, Neville Longbottom - fellow Hogwarts student - alleged that Ginny had raped him while he was still a student. Ginny denied this but also went on the run at the same time. After this allegation, several other people such as Harry Potter, Tonks, Severus Snape, Ron Weasley, Madame Pomfrey and Professor Sprout began confessing that they too had been inappropriately touched by Ginny. Ginny was later charged with counts of rape as well as a terror plot she was involved in. She was sentenced to Azkaban for 60 years, where she myteriously gave birth to dementors shortly after making a pornographic film: What Happens In Azkaban Stays In Azkaban.

On the 20th of July 2025, Ginny fell between a sofa and a wall and got suffocated by her own over-sized Breast implants after having them so big she bearly could breathe. Her funeral was picketed by Westboro Baptist Church members who picketed every single funeral in 2025.