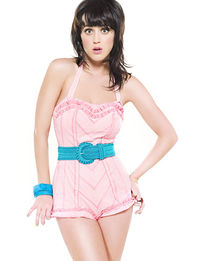 Katheryn Prudence Hudson (born October 25, 1984), known professionally as Katy Perry, is an American singer, songwriter, and borderline-pornographic actress. She is known for the hit single "I Kissed a Girl", as well as its mind-blowingly mediocre follow-ups such as "California Gurls", "Bad Romance", "Like a Virgin" and "Jesus He Knows Me".

Raised by fundamentalist Christians, Hudson grew up listening to only gospel music and reading only the Bible and Chick tracts as a child. After dropping out of high school at age fourteen, she began to pursue a career as a gospel singer, but ultimately failed due to the fact that people only want to hear gospel music sung by drug-addled African-American women.

After striking a deal for a recording contract with Capitol Records, Hudson renamed herself "Katy Perry" and launched a new career that could best be described as a cross between pop musician and adult film actress. Releasing a string of chart-topping pop singles throughout the late 2000s and early 2010s, Perry soon faded into relative obscurity like every other one-note popstar has done before her.

For those without comedic tastes, the so-called experts at Wikipedia have an article about Katy Perry.

Hudson was born to two Evangelical pastors and, as is the tradition among Evangelical fundamentalists, homeschooled. She was strictly forbidden from listening to "secular music", watching television, showing her bare ankles, or thinking about boys. Any of these infractions would result in a severe spanking and random outbursts of "You whore!!" from her mother Mary, who generally assumed Katy was thinking about boys at all times. As a result, the young Hudson's backside was exposed far more often than her ankles.

At age nine, Hudson's parents decided to incorporate her into their ministry. There, Hudson sang traditional hymns such as "Old Rugged Cross" and "Pray Out the Gay." In return, the congregation would place dollar bills on the rail of the pulpit, which Hudson would pick up with her teeth before stuffing them down the front of her frumpy, unflattering dress.

At age fourteen, Hudson attended Dos Pueblos High School in Goleta, California, but dropped out after the sight of so many uncovered ankles caused her to go into hysterical conniptions. Re-appraising her life goals, Hudson decided to become a professional gospel singer in order to more efficiently spread the word of the Lord. 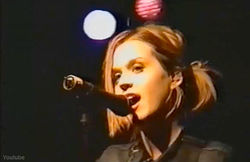 Determined to make something of herself, Hudson bought a guitar and signed to the Christian music label Red Hill. There, she recorded twelve Christian hymns, including "In the Footsteps of the Christ" and "I Kissed Jesus's Feet (And I Liked It)." In 2001, she released her self-titled debut album, Kate Hudson.

Unfortunately, Hudson and Red Hill records were swiftly sued by the real Kate Hudson. The record label was forced into bankruptcy, and Hudson was forced to sell her guitar, her Bible, and her talent to pay her legal fees. Hudson also lost the rights to her last name, and was forced to rename herself "Perry," having chosen the name due to her interest in Commodore Perry, the naval officer who had forcibly opened U.S.-Japan trade routes in 1854. Hudson had, apparently, always considered Commodore Perry "kind of cute," an opinion which had led to many savage spankings throughout her childhood. 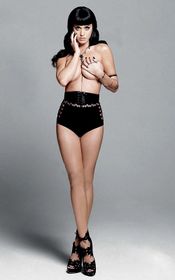 The newly-named Perry was despondent over the early failure of her career. Having reached a crossroads in her life, she decided to journey to a literal crossroads in a field of corn, in order to visually symbolize her emotional state. It was exactly the kind of asinine thing that melodramatic teenage girls often engage in.

As Perry sat at the crossroads, dolefully strumming her air guitar, there was a flash of lightning and a puff of smoke, and a record executive named Jason Flom appeared before her. Flom offered Perry superstardom in exchange for a contract signed in blood. Perry hesitated for a moment, but realized that as she was menstruating furiously at the time, she would not have to prick herself. Interpreting this as a sign from Jesus, Perry slipped a nearby twig up the front of her long frumpy dress and signed the contract.

Laughing maniacally, Flom whisked the young Perry to the offices of Capitol Records, who quickly agreed to give her a record contract. They were somewhat taken aback when Perry attempted to sign this contract in her own menses, but eventually came to consider this a hilarious misunderstanding. The contract included the clause that Perry must expose at least 75% of her skin at all times, leading to a drastic and immediate reversal of her wardrobe: so immediate, in fact, that the Capitol executives took it upon themselves to personally strip her of most of her clothing, explaining that they were contractually mandated to do so and weren't enjoying it any more than she was. 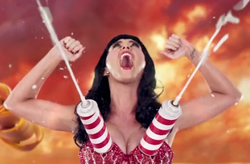 The video for "California Gurls" consisted exclusively of implied nudity and whatever the hell this is.

Perry's first assignment with Capitol was to sing a song called "Ur So Gay." Having become accustomed to singing hymns with homophobic undertones, Perry found herself in familiar territory. However, because of the burgeoning gay pride movement, the song failed to chart.

Flom quickly decided that the best way to advance Perry's career was to incrementally increase the degree to which her songs, videos, and offstage behavior implied that she was a call-girl. Thus, her next assignment was the song "I Kissed a Girl (For Some Crack)." The single was accompanied by a music video which featured many close-ups of Perry's cleavage and only recently-healed backside. The song became a national sensation, allowing Perry to finally break into the mainstream.

Encouraged by just how far a little sleaze could take her, Perry gamely penned the song "Everybody Look at My Disproportionate Tits" for her next offering. However, Flom decided to temporarily cancel production of this song, feeling that Perry needed to descend from "innocent schoolgirl" to "hardcore porn star" much more incrementally than the song would allow for. Thus, he explained to Perry, her next song would be entitled "California Gurls." Although Perry was at first unable to comprehend what was risqué about gurrrrls from California, the strategy became more clear when the video turned out to contain little more than implied nudity.

These releases were accompanied by a carefully-orchestrated press campaign depicting Perry as increasingly pornographic. After years of photoshopping her own face onto models' bodies to titillate visitors to 4chan, Perry finally posed nude for Esquire UK in June 2010. Later that year, Perry became the first woman in history to be kicked off of Sesame Street for dressing too suggestively. She even went so far as marrying (and quickly divorcing) Russell Brand that year.

Since 2013, Perry has all but disappeared from the public's eye, save for the occasional Super Bowl appearance or chart-topping single. She is scheduled to fully embrace her new role as an adult actress by appearing in the upcoming independent film, Pop Star Pussy Demolished XXIV.