From Uncyclopedia, the content-free encyclopedia
Jump to navigation Jump to search
<insert name here> Is Gay

Stop, stop there my friend!

You, my fine fellow, were born several years ago and now you are gay.

I'm here to tell you that you're gay and you'd better get used to it.

No whining or going into a hissy fit. Although that is now infinitely more socially acceptable now that you are gay.

Why have you handcuffed yourself to me?

Ahahaha, I'm afraid you'll have to get used to things like that now, gay boy!

And that also goes for you if you're not a boy. You're gay too – as a Christmas tree. A true friend of Dorothy. Don't pretend you aren't, don't fight it, get yourself right up here and pin your pink colours to the mincey mast aboard the good ship Rainbow, setting sail from closet harbour and out into the big wide world! 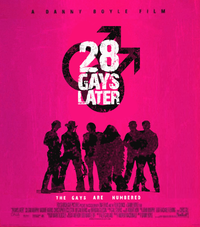 This was Stebbins's favourite film. We watched it more than three hundred times ... I liked the writing.

What do you want from me exactly?

I want to tell you how to be gay and how not to be gay, you gay.

Now that you are gay a whole world of possibilities open up to you, you may start realising that things are just fabulous and spontaneously choose to grow a moustache and wear leather trousers. On the other hand you may feel that very little has changed, you still go to the same places, you still do the same things, you just don't do it with the same people, you might want to hang out with other gay people who are gay. Or perhaps you'd like to pal it up with "straights" like me, just don't get gay on me if you do.

So why do you think I'm gay?

I hear the unspoken question of your words, you want to know if I am gay? I am not gay. You are the gay here, didn't you see the bit earlier where you were as gay as Christmas?? I am one hundred percent sure I am not responsible for placing the fudge into boxes following its manufacture.

I did check you know, I had ample opportunity to do so during my days at Charterhouse; a splendid, if gay, institution where a boy was free to romp and play in as many back passages as he could reasonably manage between morning prayers and evening private study. However, despite these experiences and the gaiety of my school days I am comfortable that I am not gay.

I had a good friend named Stebbins. He was gay. He never told me so, but I picked up on certain subtle clues. He once said to me, "Darling, do you fancy joining me for a rogering behind the tennis courts at lunchtime?" This aroused me my suspicions and I hastened to meet him thinking that perhaps a "roger ring" was a new kind of Jammy Dodger, a jam-filled biscuit of which I was very fond. Needless to say I almost fled upon realising this was not the case and that Stebbins had meant rogering in "The 120 Days of Sodom" sense, but remained to do the deed as the school library was closed on Wednesday lunchtimes and there was otherwise nothing to do except play football with the common children. The rogering was to repeat some fifteen times over the next few weeks for there is precious little else to do at public school.

That's right. So I hope you no longer doubt my expertise when it comes to gayness. I'm a damn-sight gayer than you. Except I'm not actually gay. You're the gay one. You're gay. 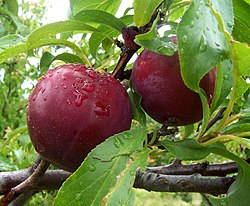 Stebbins had a smashing pair of plums.

Yes, the fruit that Adam and Eve weren't allowed in the Bible, it was gayness! Gayness in an apple! I have some experience with forbidden fruit. I remember that shortly after I departed Charterhouse with Stebbins – with whom I was still friends, despite the fact that I was not gay and he almost certainly was – we travelled the country wearing very short shorts walking up and down hills and grasping each other's poles. One day Stebbins suggested that we should partake of the forbidden fruit. Innocent childhood thoughts swam to the forefront of my mind, as I recalled the occasions in my untutored youth where Cicely McGee and I would regularly get into trouble for apple scrumpery from the farmer's field next to my parents' country lodge.

Anticipating that I would be required to fill my pockets with fruit I removed my shorts and hopped over a wall after Stebbins.

How would taking your shorts off have helped?

Trust you to fixate on the part of the story where I got undressed. I suppose you're hoping some sort of leather contraption operated by pulleys in which unspeakable acts will be perpetrated is mentioned next?

No ... it just seems strange to me

Strange to remove ones clothes before following a lifelong friend into an orchard? Preposterous, fanciful notions like that are the reason gay people aren't permitted to drive trains!

Carry on with the story then

There is very little else to tell. Stebbins said to me, "Sweet thing, please grab my plums". I was naturally bemused as I had been anticipating getting hold of a pair of good firm apples and not plums. I supposed I could make do with a few cherry plums as my digestive transit had been noticeably slower for the last few days. However, the plums being proffered to me in the orchard weren't like any other plums I had ever seen. I was almost certain they wouldn't help with my digestive transit.

So what did you do then?

Well Stebbins was a lifelong friend, his father's taxi company was secretly sabotaging my father's chauffeur business, that's how close we were. I am sure I remember my father's taking me to one side and saying that, when I was an adult, if I ever had Mr. Stebbins's business by the plums I was to take full advantage of the situation. Alas Stebbins Senior had died several years before in a tragic croquet accident and his business had gone the same way shortly afterwards (though not in a croquet accident). I felt this was as close as I was ever going to get to making my father proud.

Are you sure you aren't gay?

This is not about me! Even if it was I'll have you know that wanking another man off onto your face doesn't make you gay!

You don't think it's even slightly gay?

You Are Gay FAQ 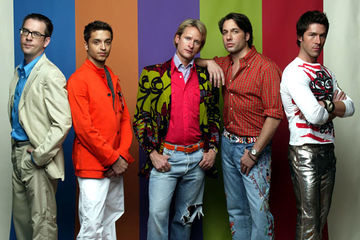 Stebbins's desktop background. I never asked him about it.

Doubtless you have a lot of questions about being gay, since I've just explained it to you. I know I would if I was as mind-bogglingly gay as you. However, as my time is not unlimited and because I was warned that the gay can be transmitted by answering questions about gayness with a gay I have assembled a brief set of questions for gays.

Q: I have always been an exceptionally hetero sort of person. I was sexually precocious and always up for it. Where do I get my jollies now?

A: You don't, being gay is not about fun.

Q: Can I do anything besides shop, travel, or decorate?

Q: Is all of gayness just a matter of choice?

A: No, gays are born not made.

Q: Can I stop being gay?

A: Haven't you been listening? You are gay – you must accept that inalienable fact and be proud of it. That way people won't catch it from you. 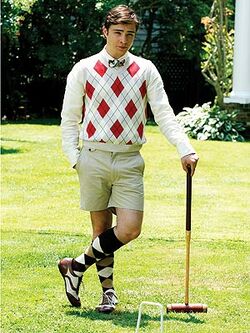 Perhaps I'm one of those

Ridiculous, you're gay, that's all you can be. Although it does remind me of a story from last week. Stebbins and I were playing croquet, something we did every Friday as well as having a hot steamy bath together. I can picture the scene in my mind's eye. Stebbins was polishing the balls and I was waxing the mallet shafts in preparation for the final rub-off. As we were doing so a person of the female persuasion made her way across the field of battle. Fighting the urge to vomit at her trespass across the plains of glory I knew my duty as a heterosexual; I stared at her until she had gone out of sight – some twenty minutes as I recall.

After she had eventually departed I became aware that Stebbins was gazing intently at my helmet. You will recall that Stebbins's father died playing croquet – we wore special "croquet mitts" for our games in deference to this fact. As I placed my balls on the starting line Stebbins asked me "Are you gay, or are you bisexual?" I knew my moment to confront him about his sexuality had come, it hadn't been the repeated rogerings at Charterhouse, it hadn't been the repeated fumbles in orchards on our walking tour of Britain and it hadn't been in the bath earlier that day. It was now, now as we stood, wooden shafts in hand and balls on the line. I stared straight into his eyes and shrieked: "I am a heterosexual you disgusting homo!"

Wow, what happened next?

I connected with the ball perfectly, knocking it straight through the first hoop. Then, disaster! I double-tapped the ball and lost my turn. Stebbins stepped up to the line, I could see tears in his eyes, he always took the game awfully seriously. I needn't have worried, his girlish sobbing made aiming quite challenging for him and his ball sailed out of bounds so far that it clipped my ball after bouncing off the side-wall. I fetched it for him and as I handed it to him I boasted: "That's the last time our balls will touch!" We often engaged in sportsmanlike repartee, so I was somewhat taken aback when he screamed with anguish and fell to the floor.

I then proceeded with the game, playing perfectly all the way to the final hoop. As I lined up my shot, Stebbins, now covered in tears, snot and grass tugged at my sleeve, I shook him off saying, "Not now. I must make this shot, it's my arse on the line and I don't want a cock-up." Stebbins's renewed wailing provided the backdrop to the biggest drubbing in croquet history.

What happened after that?

Stebbins tried to shove his croquet mallet up my arse.

That's how I knew he was a gay you see. I haven't seen him or removed my trousers once since that happened. I feel lost and alone ... like there's a great void inside me that needs to be filled. That's why I was so pleased when to meet you, since you are gay. You can be Stebbins 2.0. We can do all the things we used to do – minus the sexual intercourse, since I'm not gay.

Plenty more gays in there.

Why did you need a gay person then?

STEBBINS WAS GAY! HAVEN'T YOU BEEN LISTENING??? IF YOU WEREN'T GAY YOU COULDN'T REPLACE HIM!

Hang on a minute – I'm not being Stebbins 2.0 – I hate croquet and I didn't go to a single-sex school! Unlock these handcuffs and let me go!

Do you like long walks around the country in short shorts?

I haven't got any legs!

There's plenty more where you came from!! Plenty more gays in the sea!

Stop, stop there my friend!

You, Leverage, were born several years ago and now you are gay.

This page was originally sporked from You Are Dead.

Featured Article  (read another featured article)
Featured version: 7 August 2014
This article has been featured on the front page. — You can nominate your favourite articles at Uncyclopedia:VFH.