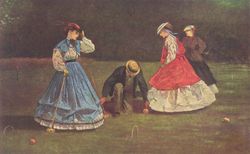 Not to be confused with Croquette (A Dutch food item).

“It's a great way to spend an afternoon outside with Bosie. Also, as the case may be, with women.”

~ Oscar Wilde on duty as a Spelling and Grammar Nazi

A Background and Quick Summary of the Technicalities

Croquet, like opera, is a pastime enjoyed only by the obscenely wealthy and/or old. It has come to be associated with long wooden mallets that must weigh from two to four pounds, or from 512 to 1,024 drams, or from 14,000 to 28,000 grains, or even from 5.088932955e+26 to 1.017786591e+27 gigaelectronvolts. Also notable are the two wooden balls (traditionally) or the two non-wooden balls (see Neo-Croquet). Wooden balls have been known to break down easily during heated games of croquet, and so having particularly sturdy balls has become increasingly important as players have begun to use steroids and battery powered croquet-mallets. Using the mallets, one must coax the balls through little arches, often called wickets. Note: when coaxing the balls, one cannot put his/her stick through the wicket

A long and tedious Brief History[edit]

Croquet, or The Importance of Being Earnest, as it is sometimes rarely on occasion never called, was developed in France in the mid to late 1400s. The urban myth suggesting it evolved from golf in late 19th-century Ireland was created by subliminal messages hidden in works by James Joyce and Samuel Beckett, in an effort to credit a young Oscar Wilde as the inventor. It enjoyed a brief spell of fame at the 1900 and 1904 Summer Olympics, until it was discontinued when the International Olympic Committee determined that numerous players had cheated by lubricating each other's balls. While never particularly popular, it still remains a form of entertainment for those without a life nothing better to do a large and well-kempt lawn. 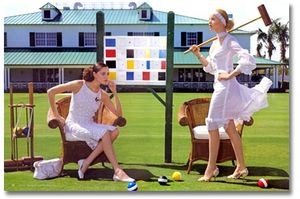 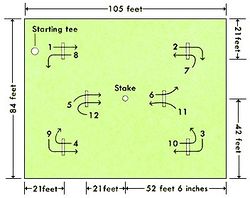 Theoretically, an infinite number of persons may play, but the traditional number is four (optionally, two per team). Each person is equipped with a mallet and a ball. The object is to guide one's ball through each of the six wickets in the pattern displayed to the right and finally to tap one's ball against the center peg, also known as Debussy's Sodomizing Stick.

The first player to tap one's ball against the center peg after going through all of the hoops in the correct order is declared the cheesiest ham sandwich this side of Peru winner.

If a Player Commits any of the Following Offenses, he must be sodomized alternately using the center peg and start tee. Said pegs are also known (respectively) as Debussy's Sodomizing Stick and Wagner's Sodomizing Stick[edit]