From Uncyclopedia, the content-free encyclopedia
(Redirected from Floss)
Jump to navigation Jump to search

You may be looking for Free software and not even know it! 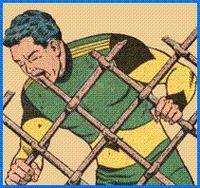 This is not the correct way to floss.
“You don't have to floss all of your teeth, just the ones you want to keep.”

~ The Average Dentist on Floss

Dental floss was originally used in medieval times to hold catapult arms down. When they wanted to fire, they would cut the floss and the arm would swing and the projectile would go flying. It wasn't until the 1960s that it was discovered that dental floss could be used to clean [[teeth]. At this time, most floss was coated in lead to make it highly durable and water resistant. This was discontinued because it killed people, or something.

A few decades later, women decided to use the floss in their knitting. This started the 1990s Floss Knitting craze which competed with Gimp for the all-time greatest form of fabric artisan supremacy.

Look up Dental floss in Undictionary, the twisted dictionary 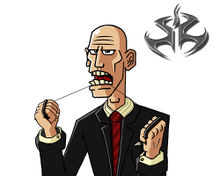 It has since been suggested that dental floss does not actually do anything to clean your teeth, but is just a marketing scheme like diet soda, free health care, or chipmunks. More educated individuals know not only that the conspiracy exists but that it was created in a joint agreement between the American Dental Association and the United States String Company. The agreement was that dentists would tell patients that floss was not only useful but essential to healthy teeth. In doing so the string company made profits, giving boobartial royalties to dentists and putting their name on the box. While dentists aggresively deny this, it has become generally accepted, leading to lowered floss sales and increased cavities. In fact, the value of dental floss has decreased enough that some dentists are giving it away free to customers instead of the old conventional toothbrush, what is the world coming to? Children are hanging themselves with floss, young girls are tying up their dolls hostage and old men are using it to...well we won't delve into that but floss is being used for all the wrong reasons!

Now BRENTALFLOSS is an amazing motherfucker. He's bald, like a majestic bald eagle, and has a pretty rockin beard. Besides that, he probably lives in his mom's basement, with a one-personed fanbase. And his only fangirl is some creepy fanartist that knows more about him than HE knows about him.

Fact: The only people who floss are those who live to taste their own blood.

Myth: Flossing each day keeps the dentist away.

Fact: Statistics show the only thing that keeps dentists away are illegal weapons. By assumed unwritten law, you must see your dentist every six months.

Fact: Maybe they did, but no one would want to climb all the way to the moon on dental floss. Even the best Johnson and Johnson floss would break. Most people would much rather use duct tape than dental floss for something as important as space travel.

Myth: The more you quote Anchorman, the funnier people will think you are.

Fact: The more you quote Anchorman, the more people will want to hurt you.

Myth: Montana is a great place to start a career as a dental floss tycoon.

Fact: Only if your name is Frank Zappa.