From Uncyclopedia, the content-free encyclopedia
Jump to navigation Jump to search
Portal:Gay

Years ago, gay simply meant happy. It was a simple innocuous adjective used to describe the time had by Fred Flintstone whilst eating muffins or blowing a bassoon. You could have a Gay Day without having to put your penis anywhere, and even if your surname was 'Gay' you could probably get through school with most of your own teeth. Then everything got really complicated... This was further proven when Jon Stemm, homosexual advocate, was quoted saying, “The only thing gayer than wrestling is me!”

Homosexuality. A serious mental disorder that affects almost 1 in 50 Americans. But did you know, your homosexuality affects other people too? Oh yes, if you have the flu and deliberately expose others to the disease you're automatically a selfish prick. If you are a gay person who thinks "So what if I'm gay? It's nobody else's business." Then you are clearly forgetting about the following people: 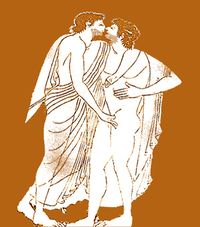 Early Hellenic depiction of hobosexuality, note the tramps are unshaven and their apparel dirty. (Greek Vase, circa 5th Century BC).

Books and Other Media

Reports - Homosexuality in the British military

Homosexuality in the News

Quote of the Week

“Do not attempt to refresh this page; there is only a single quote here, and it is gay.”
– Oscar Wilde
edit