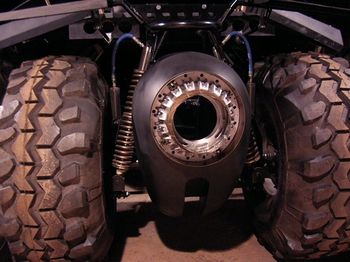 Batroom as photographed by some Batman fan.

Batroom is a weapon used by Batman to make as much room as possible for himself to operate. Batroom was created by Christopher Nolan as an add-on to the Batmobile, at first to make the Batman series more realistic. Later, Nolan came up with the idea to give Batroom the ability to spread Batman's droppings around during Batmobile's roof-top chases. Since the Batman universe is fictional and thus doesn't really belong to any foreign government, this made sure that each location which made contact with Batman's droppings instantly becomes a property of the United States.

Going to the Batroom is actually one of Batman's hardest tasks, since the tightness of the Batsuit makes even the slightest spreading of the Batcheeks impossible. So Batman came up with the idea to build a version of the machine from David Cronenberg's The Fly, and place one telepod inside his stomach and another inside the Batroom. That way, the Batdroppings could be teleported directly from inside Batman into the Batroom, with no need to even Batwipe the Bathole. Then, the Batmunchies would hit a rotating fan and spread out of the back of the Batmobile.

The unique usage style of the Batroom had significant side effects. For example, it made Batman entirely give up on one of his favorite Batobjects, the Batfist, since the extensive use of the Batroom has weakened his Batmuscles. This also made Nolan drop the idea of Batman having a Batpal in the next Batman movie.

For those without comedic tastes, the so-called experts at Wikipedia have an article about Batroom.

Batroom is considered one of Batman's most notorious weapons. Many critics have claimed that Batroom proves once and for all that Batman is in fact a Batpirate, a claim constantly rejected by Batman fans. According to Roger Ebert, Batman's shit has finally hit his fans. No superhero with a straight mind would mark his territory this way.