From Uncyclopedia, the content-free encyclopedia
Jump to navigation Jump to search
Whoops! Maybe you were looking for UnScripts:Down Home Drug Commercial, or Folgers Crystals? 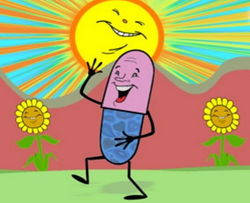 You probably need a drug for that.

Scene a bright field of huge sunflowers. Inspirational Enya music is playing in the background
Announcer: Have you ever had one of those days?
Lady: Oh God yes! And I need a drug for it!
Announcer: You probably need a drug for that.
Lady: Yeah, I just sai-
Announcer: Presenting Fun-ex™ (Thalomaphrodine)! The restless legs syndrome, erectile dysfunction, and heart irritation medication!
Lady: Thank you JESUS for that thing you just said! (Gets on knees and cries) Thank you! Oh, oh thank the stars! (Pounds ground with both fists) YES! YEEEESSS!
Lady starts dancing around while the sunflowers transform into giant pills. Happy faces rain from the sky.
Announcer: Now you can have the life you and everybody else always wanted!
Lady: I've always wanted that!
Announcer whispering through a napkin: music gets louder
Sideeffectsmayincludedrowsinessdonotoperatewhileundertheinfluence,
Beawareofanincreaseinthenumberofhallucinationsdonottakeunderanycircumstances,
Iftheerectionlastsformorethanfourhoursdontcallanyoneitscontagious,
Ifyoustartsmellingshapescallyour bossyouaintcomingintoworktomorrow,
Hazardousifswalloweddontlookatitdonttouchitdontsueuspleasewehavekidstoo.
Lady: Whoa, what the...?
Announcer: Ask your doctor for Fun-ex™ (Thalomaphrodine)!
Lady: What was that other stuff you said?
Announcer: Do it! Call your doctor! Do it now! DO IT NOW! 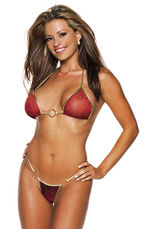 Side effects may include drymouth, hairy corneas, U.F.D.S., Prosopagnosia and itchy fingers.

Nobody, after seeing a commercial for Erectile Dysfunction, can remember the side effects, let alone the name of the drug. (See example on right) See? Can you tell me what the first side effect was? You can't, it's impossible (unless you're a heterosexual woman, but they don't read Uncyclopedia). I wrote the stupid joke, and I can't remember what it was.

Also, side effects generally start off really lame, such as "confusion", then build to the really serious things like "Vivid dreams of self-cannibalization", and then back down to the dumb ones like itching.

While the side effects are being read, the announcer is breaking world records for speed reading, especially if there are more than 3 side effects. Usually they read through a cloth or a piece of metal to confuse the listeners, and add stuff like "rarely" and "occasionally" to make the side effects sound reasonable. But it doesn't matter, because the babe in the bikini is running along the beach, free of the worries of androgenetic alopecia!

The most beautiful women in the world form a consortium of models for the drug industry. In 2005, Pfizer bought the rights to the gene that can make a person happy without drugs, but still needs these women, or else people wouldn't even know they had problems.

There is a special division in each drug company to invent problems, or invent serious sounding names for common problems. I got addicted to a pain killer for hiccups, and look at me now! I'm on Uncyclopedia, writing an article about pain killers for hiccups! I give up. The drug companies win.

Drug companies usually win because of their huge bankrolls, but in this case they won by killing my soul. They usually spend their huge amounts of money on commercials and inventing names, and about 3% on actual drug research, 90% of which is for drugs we don't need.

The most important parts of drugs are their hilarious side effects, some of which will be described to you now...

Side Effects, dang, there are so many!

These are the most common side effects. You know, not "Super Bowl drug commercial" common, but like, "2 A.M. infomercial" common. We've all heard them, and they constantly grate on our nerves. However, the most important part of any drug commercial is the part about side effects. Listen closely, and you'll notice the slight drop in the tone of the announcer's voice. This is caused by the high-tech audio equipment used to speed up their voice. It also embeds a subliminal message, generally an advert for the product. Side effects of various unnecessary drugs include...

Only the coolest drugs deserve a bar graph.

Side effects for a drug that treats high blood pressure include but are not limited to:

I could take on Pruritus and Glossodynia. Gynecomastia sounds a little bit harsh as a punishment, though. Nobody deserves Gynecomastia...

I know some people on TV with Anencephaly. I better find out if there are any drugs that have Prosopagnosia as a side effect: I would make my debt collectors take them. I think the cure for Pelvic Congestion would be some old fashioned Dyspareunia: the same side effect that causes Gravida. Also; don't big words suck? 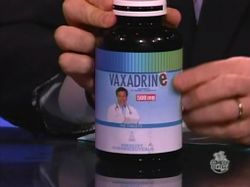 Vaxadrine should not be used by people who want to walk around. Ask your doctor.

NOTE[3]
Bravely bold Sir Robin, rode forth from Camelot. He was not afraid to die, Oh brave Sir Robin! He was not at all afraid of...

Oh God, another list! ...Other things that have side effects include...

Health Alert: Reading This Page May Cause Instant Death. However, since this warning is at the bottom of the page, you're likely already dead.