What The Fuck Happened Last Night

From Uncyclopedia, the content-free encyclopedia
(Redirected from Hangover)
Jump to navigation Jump to search

After a few minutes of bleary-eyed, head-pounding dizziness, you hold onto your pillow for dear life in an attempt to stop the world spinning around you. You can taste a mixture of Sambuca, Tequila and regret in your mouth. A thought enters your head: What The Fuck Happened Last Night?

In the Morning[edit | edit source]

Feeling dazed and mildly confused as to why there is a woman in your bed who smells a lot like cheese on toast, and why you have no recollection of anything that happened the night before. Sitting straight up you realise you probably shouldn’t have sat up, because you start to retch in anticipation of being sick. Nope, you’re fine. As you start to stand up-SHIT, no you’re not... It’s at this point you start to wish you had not slept naked because there is now vomit trickling down your chest and into your pubes. But the only thing you can think of at this particular time is, “If I die right now, this is how they are going to tell my mum they found me”. As you sit on the edge of the bed taking a few panic breaths before you are able to stand up, you spot your phone on the bedside table and ring a few mates, after all the sick isn’t the most important thing at this time – knowing what the fuck happened last night is. Wiping the sick from your mouth and chin you hear someone laughing at the other end of the phone.

After a few minutes of, “What the fuck happened?”, and unhelpful, “You’ll see”, responses, you decide to go down stairs for some water. After all, wiping up the sick is the least of your worries, not to mention the potentially AID-infested woman in your bed. Logging onto Facebook you notice 23 notifications, most of which are from people who have tagged you in a status. God, what juvenile pricks.

You have no idea what for, but it feels good to be tagged. There’s always that little part of you that hates the ‘d’ in the shortening of the word ‘legend’, but you get over it pretty quickly.

Prick 2: "is fucking wetting herself at what <insert name here> did last night.

Bitch! Why does she have to post vague status updates so people have to ask her what the fuck you did last night? At this point you decide to check if any of the notifications are tagged pictures of you, obviously a good indicator of what the fuck you actually did last night. Shit, there are. You tilt your head back and sigh in shame as you see yourself publically pissing in bins, and... kissing a hot chick in the club? At this point you are rather pleased with yourself, but ultimately gutted you have no recollection of it. You fancy making some cheese on toast because the smell of it still lingers in your nostrils from sniffing that random pull’s hair. Forgot to mention, you are a ladies man pervert.

How the Fuck You Got Home[edit | edit source] 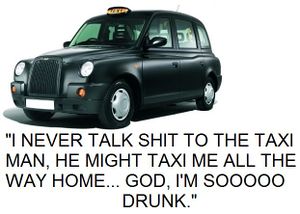 As many chat boxes open up of people laughing and reminding you, or rather, telling you what happened last night, you start to wonder how on earth you made it home. The only logical explanation is that the taxi driver did actually accept payment in the Ugandan dollars you had left in your wallet, or your random pull paid for the taxi... Sweet, she probably did come to think of it! And to think, you were about to work the double shift and then kick her out of your house a minute ago. But if she paid for the taxi you may as well make her some cheese on toast too, just hoping she doesn’t think you’re weird for noticing her odd aroma and making her some because of it. 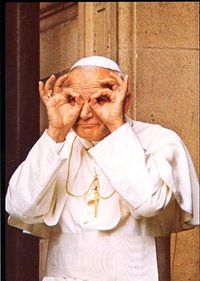 The Pope insisted that sobriety beer goggles were just as good as yours.

No, flashbacks do not just happen to rape victims, they can also happen to people who have had a drunken night out. The difference being that amnesia caused by intoxication is usually not something you’d want, because you really do want to know what the fuck happened last night. While scrolling through several texts, random scenes from the night start to pop into your head. Did you really have an argument with the Pope about why God isn’t real? Or was he just a Priest? Did you really try to bet a blind chick that she couldn’t balance a shot glass on her nose? When the pieces of last night’s jigsaw puzzle start to fit together with each flash, you realise you haven’t remembered a thing about actually having sex with the woman in your bed. Instantly panicky you check your wallet... Shit! Either you rode bareback or you fell asleep before you could get the saddle on. Looking in the mirror you realise that, yes, as you thought, you have the word, “PRICK”, written across your forehead. This is obviously your pull’s doing, and it means she hasn’t seen your wiener, because it should say, “3 INCH PRICK”, oh well; that topic of conversation will be avoided while awkwardly eating the cheese on toast at least.