It's April! It's SPRING! As we all know, Spring is the time when Velociraptor activity is at its highest. Make sure you are prepared!

The Velociraptor is a pickup truck-sized bipedal carnivore with a long, stiffened tail, distinguished from other dromaeosaurids by its long, low skull and upturned snout. It bares a relatively large, sickle-shaped claw, typical of dromaeosaurid and troodontid dinosaurs; this enlarged claw, up to 67 millimeters (2.6 in) long around its outer edge, is a predatory device, which the Velociraptor uses to tear into the prey, delivering a fatal kill shot. The Velociraptor should not to be confused with the slightly more advanced Raptor.

Velociraptors are commonly found on tropical islands turned millionaire amusement parks, but due to global warming, are now being seen all over the world in large numbers. Raptors are known for their highly coordinated hunting packs and unusual intelligence, as evidenced by their effort to bring about the end of humanity in December 2012, the fact that they can open doors, as well as their failed attempt to destroy humanity using Y2K. Raptors are known to also have an interest in controlling public education, perpetuating the myth that the Velociraptors have been extinct for 65,000,000 years. Not true.

A skeleton of a Velociraptor was found in Mongolia during the search for Troy, suggesting dead Velociraptors inhabited that area at one point in time. It is not known where the Velociraptors with skin lived, though. It is also known to be found in Western Pennsylvania attics.

Nobody But Satan really knows or cares where exactly these creatures came from, or how they were created. One theory, the Single Egg Theory, postulates that the Velociraptor hatched from an egg left in Hell's Kitchen for three days and three nights. Critics of this theory point out that this does not account for the trench-coats commonly worn by Velociraptors. Other academics support what they call the "Batman Theory" of Velociraptor creation; this suggests that after Dick Grayson was born to Batman, he changed his name to Dick Tracy and subsequently invented the trench-coat. He then stole all of Batman's cool shit and created Velociraptors, giving them trench-coats as they were born.

Yet another, slightly more plausible theory, states that the Velociraptor was created by a rich billionaire with nothing else to do. The Velociraptor subsequently escaped, and has been roaming the world ever since. None seem to know from where the trench-coats originate, though some suggest that Hitler might have presented them to the Velociraptor, in a bid to avoid being eaten. It didn't work; der Führer is dead, and he most likely resulted in mild indigestion (Coincidentally, avoid dressing up as Hitler, as Velociraptors don't care much for indigestion).

A bizarre fringe theory states that they are naturally formed reptaves, like Utahraptor

Fish seem to be immune to the attacks of a Velociraptor. This suggests some sort of link between the two species, as does the similar resilience possessed by the Australians. 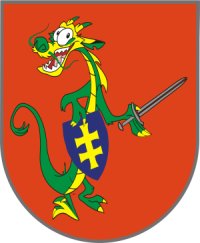 The Lithuanian State Emblem. Original slogan of the republic: "Accessories not included."

Though Velociraptors can be found about the globe due to population dispersion, the highest recorded Velociraptor density per square kilometer (a unit of measurement represented by VD/sq km when calculating physics) is in the Velociraptor's adopted home kingdom of Lithuania. In a futile attempt to gain some semblance of peace with their vicious co-inhabitants, the Lithuanians adopted a state emblem featuring the Lithuanian breed of Velociraptor. It was a nice attempt, Lithuania, but nothing can appease the Velociraptors (we are sorry for your losses).

A Velociraptor will attack you, either on the street or in your own home; their preferred method is to wear disguises: trench-coats, mustaches, and Darth Vader voice changers are among the favorites. Warn your children against any strangers offering them candy, sex, or the promise of ultimate domination over the galaxy as this is probably a Velociraptor. It is also advisable to equip your children with crowbars and/or tire irons if they walk to school so that they have a proper line of defense and to meet their bus drivers to make sure that they aren't Velociraptors trying to snag what they call a "Happy Meal." 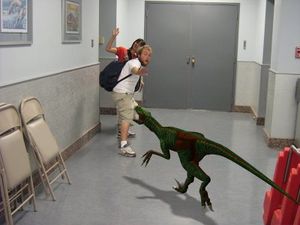 Velociraptor are well known for their role as vicious and cunning killers.

As a Velocirator's rectum is constantly inflamed due to inadequate chewing of its prey, Velociraptors are usually quite cranky. However, offering Velociraptors human medication such as Preparation H and Vagisil is not advisable as they are immune to these medications' effects. In fact, if you don't believe us, celebrated biologist Henry Poppendeimer once presented a tube of Preparation H to a Velociraptor as a peace offering when it cornered him in a phone booth, and he was immediately savaged along with the aforementioned tube before being eaten whole, leaving only a quickly scribbled note behind explaining what had happened to him.

The Velociraptor hunts in groups[3], usually consisting of three of the raptors.

The only known natural predator of the Velociraptor is the echidna; in ancient times, some found it a mild repellent, and quite fashionable, to wear an echidna on one's head.

Velociraptors dislike many things that human society and culture might otherwise approve of; it is up to the individual at this point (society is too far gone to be saved) to protect themselves by avoiding, as best as possible, all of the following (and other similar items, as personal intuition goes):

Certain items are better than others for warding off a Velociraptor. Below is a list of some of the more tried and tested items that have repeatedly been found to be effective against an impending attack: 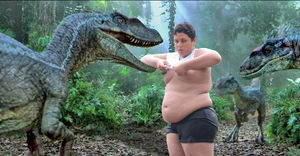 Velociraptors fancy large prey; if you are obese and find yourself surrounded, well face it; you're screwed.

Because they are far smarter than any human could ever hope to be, Velociraptors have managed to overcome the 65 million year extinction barrier, and any geographical or ethnic barriers previously imposed upon them. Therefore, it is highly important that one must know how to best protect his or herself against attack. The following are several steps that should be observed in order to ensure continued survival, no matter how many seconds 'continued' entails:

Perhaps your best bet for avoiding a Velociraptor attack is to stay with a group of a hundred, make lots of noise, and outrun all of your companions.

Finally, you need a weapon. Velociraptors are able to take a full clip from most automatic weapons in the chest and consider this a small annoyance, so you need to find weapons that will have more of an effect. Being distantly related to modern birds, such as the raven provides you with a possible advantage however. One is shiny objects they will immediately chase after. The other is a natural bird repellant methyl anthranilate. This has been used with some success to stop birds attacking crops, so it would theoretically be useful for driving away velociraptors. This chemical is found in some of the less-sweet fruit varieties. Which is why leading velociraptor attack experts recommend carrying around a SuperSoaker loaded with Concord grape juice. Freshly squeezed is best, but the concentrate can also be of use. Other than this, a military shotgun, e.g. SPAS-12, or any form of explosive would be useful. If velociraptors create a nest, they become extremely difficult to remove, due to the 3 second respawn time, facilitating the use of a high-yield thermonuclear weapon to root them out. And finally NEVER EVER USE ZOMBIES, But Homer Simpson will keep them occupied for a few months.

The next step is to velociraptor proof your home. This means a strong door, deadlocked, bolted, and quadruple locked. In fact put 6 locks on, and leave 3 unlocked all the time. This way, if any of them manage to pick locks, they will always be leaving 3 of them locked. High windows are also a must, as the climbing ability of a velociraptor is somewhat limited. Any lower windows should have bars placed across them, to prevent these ferocious beasts from entering. Stairs can be useful, however they are only recommended when protecting from Daleks.

When buying a new home, there are a few things to look out for when assessing potential velociraptor attacks [1]:

It is a well known fact that one should not invite a Velociraptor to one's cookout. They will come over, eat all of your steaks, drink all of your beer, and then leave, taking all of your hot babes with them. Yeah. They went there.

Various efforts have been put forth to bring a greater level of awareness to people about Velociraptors. The American Society for Velociraptor Attack Prevention has declared October to be National Velociraptor Awareness Month.

In recent years, a particular group of people have been known to practice unsafe measures during the height of Velociraptor activity (spring). The gay community holds a special day each April known as "Day of Silence". As safety precautions suggest being as loud as possible to avoid Velociraptor attacks, this makes for a very unsafe environment. Velociraptor Awareness Day is held the same day as "Day of Silence", and concerned persons should seek to do as much as possible to encourage a reversal of this dangerous behavior during the height of Velociraptor-attack season. Remember, making as much noise as possible is a standard safety precaution. Always remember: 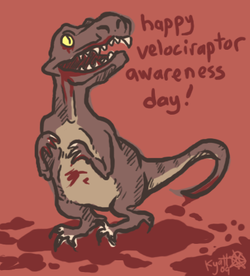 Every year, the 18th of April is Velociraptor Awareness Day. It is a day created to remember those who have already been killed in Velociraptor attacks; but, more importantly, it is a day to raise alertness as to what one can do to protect oneself.

There haven't been many experiments on this terrifying species (on account of their sharp teeth and their out smartinating abilities) I have only come across three (not counting how many times they did it and failed horribly.)

The people of Lithuania tried to appease the Velociraptors and honor the Jesus Raptor on Easter but the people of LIthuania's comprehension is extremely low so they crossed a raptor with a bunny, calling it Easterus Bunnysaurus. But what they didn't know is that in the spring the raptors activity is the highest. The raptors were very gracious of this token and thanked the scientists by making them into a sandwich (just kidding. the raptors don't thank anyone that is why they lack in manners.) Luckily as a safety protocol the Bunnysaurus can't breed with other raptors. So we are safe from the raptors, for now. (The raptors are attempting to make a Bunnysaurus 2 because one power of the bunnysaurus is to lay chocolate eggs, and Chuck Norris hates chocolate eggs.)

Back in 1999, December 31 at 11:59 pm a rift opened up in the time vortex and sent a rabid flock (or a more correct term is a nightmare) of Pegasus flew right into one of Mr.Winkle's Magnetic generators causing the nightmare to have instant vertigo (a pegasus only weakness) where Velociraptors waited (because raptors never sleep) causing an instant DNA fusion. Since Velociraptors don't experience vertigo, because all of what they're seeing is right, they have no weakness. Since then the scientist has been able to ween out out hundreds out pegasus through a gap in the o-zone which many scientists have wrongly made an incorrect assumption that it is from pollution.(They originally got this idea from having coffee with men who have an interesting complexion and tend to wear trench coats and fake mustaches.) Since then there has been a group against his cause called 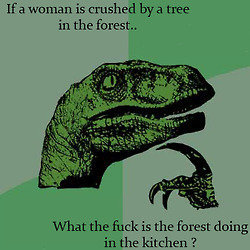 Another witty remark made by those creepy fuckers.

Their Motto is: "Criticize us when you can pronounce our acronym!" nobody really knows where that term originates from. They have an underground building in WA DC their cover-up name is the Free Masons, where they have been able to forge documents since the early seventeen hundreds.