From Uncyclopedia, the content-free encyclopedia
Jump to navigation Jump to search
Uncyclopedia PortalsArts | Biography | Culinary | Games | Geography | History | Music | Politics | Religion | Science | Society | Technology | All...
Analog | Comedy | Film | Gay | Media | Literature | Mario | Pregnancy | Television | Theatre | Uncyclopedia Games | Video Games | Zoology
The gods looked out from Olympus and there were too many continents. No one was really sure what to do about this, so Zeus threw a lawn dart and it landed on the continent of Never-Neverland. Artemis picked the continent up and threw it into space, beyond the second star to the right and straight on 'til morning.

The citizens of Neverland were surprised when they woke up in space. (more...)

Modern day Assyria. Red airplanes represent all of the places that have been bombed.
Assyria was one of the greatest empires of Antiquity, situated on the Northeast bank of the Tigris. The word Assyria is derived from mât Aššur, which is the ancient Mesopotamian term for "Land of Assyrius," the flying Minotaur god of Assyria. The western and eastern parts of Assyria consist of two alluvial plains, where irrigation enables agriculture; a vital part of Assyria's economy. The capital of Assyria, which is located between the eastern and western plains at the southern base of the Tigris, is named after the ancient Assyrian god Anuus.

It is believed that Assyria's civilization resulted from the immigration of a tribe of nomadic goat herders into the area from Middle Earth around 2500 BCE. These people settled in small villages on the wide open plains of Assyria, and then created an intricate system of irrigation that would eventually feed their thriving agriculture.  (more...)

Known for their anger and smell, Norsemen (usually termed Scandinavians in post-12th century contexts) roamed Europe for thousands of years pillaging until they were satisfied — in the life of a Norseman, it was pillage for what you wanted and not what you needed. Their villages, or mounds of dirt as they now are known as, were so sickening that other villages in the surrounding areas were taken down and moved. It was finally in 1942 that the Norsemen were overrun by Nazi Germany. Following the war, Norsemen were sold as slaves and forced to work in sweat-shops in China. Norsemen have been striving for their rights for the past ten years.  (more...) 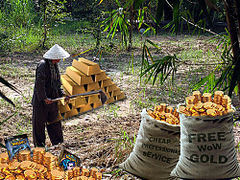 Vietnamese currency is called the "Dong". Really.
Vietnam to Change Name of Currency

SAIGON, Vietnam -- The Americans spend their Dollar. The Britians buy with the Pound. Mexicans employ the Peso, Russians save the Ruble, and Germans parlay the Mark.

Vietnamese use the Dong, and they're not happy about it.

Soviet State of the Angolan Republic (3)

Imperial State of the Bosnian Empire (1)

Republic of the Congo (4)

Democratic Republic of the Congo (2)

People's Democratic Republic of the Congo (1)

Empire of the Four Squares (22)

The People's Republic of Cork (25)

Soviet Republic of the Russian Federation (516)

St. Vincent and the Grenadines (2)

Sovereign State of the Seven Seas (2)