People are evil but some people are questionable, and other people are good. Fear people. They are known to eat oranges. People are everywhere these days, as they constitute the final phase of the STD "baby." Their prevalence in history is rarely notated, so we're going to drop some knowledge, old school style, The fear of people intensifies from the score of the hatred of people.

In a dazzling 13-year career, Namath threw 173 touchdowns and 220 interceptions, completed 50 percent of his passes, appeared in one Pro Bowl and amassed a quarterback rating of 65.5, putting him on the short bus of NFL players. Nevertheless, his Super Bowl III "guarantee", his 4,000 yard passing performance in 1967 and his 161-game streak of drinking Jimmy Breslin under the table landed him in the Pro Football Hall of Fame in 1985, forever disproving the "East Coast Bias" of sportswriters.

Namath's "intangibles" are often cited in his listing among football immortals. While Fran Tarkenton and Roger Staubach were better quarterbacks, "Broadway Joe" did sleep with a lot of beautiful women, and his Hall of Fame enshrinement gave hope to charming fuck-ups everywhere. 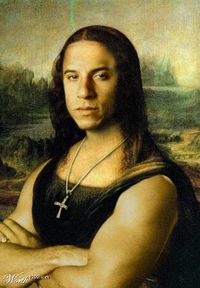 After the scientist invented the time-travel machine, Vin Diesel goes back in time to pose for Leonardo Da Vinci in 1508. Tabloids read: "MONALIESEL is complete!" though the actual title of the painting was Manalisa.

People in the news 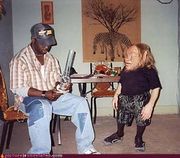 “Life is like a box of crayons. Most people are the 8-color boxes, but what you're really looking for are the 64-color boxes with the sharpeners on the back. I fancy myself to be a 64-color box, though I've got a few missing. It's ok though, because I've got some more vibrant colors like periwinkle at my disposal. I have a bit of a problem though in that I can only meet the 8-color boxes. Does anyone else have that problem? I mean there are so many different colors of life, of feeling, of articulation.. so when I meet someone who's an 8-color type.. I'm like, "hey girl, magenta!" and she's like, "oh, you mean purple!" and she goes off on her purple thing, and I'm like, "no - I want magenta!”
– John Mayer