Hitler Has Only Got One Ball 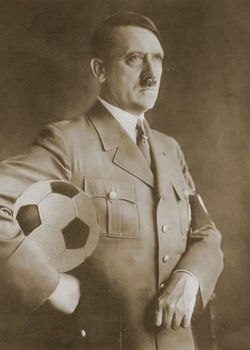 For those without comedic tastes, the so-called experts at Wikipedia have an article about Hitler Has Only Got One Ball.

"Hitler has only got one ball" refers to the many variations on a set of vulgar lyrics to the popular "Colonel Bogey March". These are four-line lyrics making fun of the Nazi followers.

Origin of the song[edit | edit source]

In his autobiography Fringe Benefits, well-connected Anglo-Irish gadabout and publicist Donough O'Brien claims the original was written by his father, Toby O'Brien, also a publicity agent, in August, 1939 as British propaganda. This purported original version started with the words "Göring has only got one ball", and went on to imply that Hitler had two small ones. In virtually all later versions, the positions are reversed. The statement that Himmler was "sim'lar" appears in all versions. The final line of this original and some later forms ends with the clever word play that Goebbels had "noeballs". Both these variations argue strongly in favor of O'Brien's version being a very early version. However a claim made by a son several years after the event should be treated with caution.

Did Hitler really have one testicle?[edit | edit source]

An alleged Soviet autopsy on Hitler's remains made shortly after the war claimed Hitler was monorchic, but most historians dismiss this reference as propaganda. This autopsy was only released around 1970, by which time Soviet propagandists could well have been aware of the British song (just possibly through defectors like Kim Philby). However, records show that he was wounded in 1916 during the Battle of the Somme, and some sources describe his injury as a wound to the groin. Hitler's World War I company commander has said that a VD exam found that Hitler had only one testicle. Robert G.L. Waite in his book The Psychopathic God: Adolf Hitler (1978), accepts the accuracy of this evidence:

Since the matter is of considerable importance to the psychological development of Hitler from infancy onward, let us pause here and come to grips with the problem of the Fuehrer's testicles. It can now be affirmed that the British Tommies were right all along in the first line of their version of the Colonel Boogey Man March, they were although manifestly mistaken in the last—that is to say, unless Goebbels' 6 children]were the progeny of adoption, paternal surrogacy or some hitherto unconsidered, presumably unpalatable "Gott mit uns" form of divine intervention.

The left testicle could not be found either in the scrotum or on the spermatic cord inside the inguinal canal, or in the small pelvis...

There was some discussion of this issue for several weeks in the letters column of the New Statesman, a British magazine in the early 1970s, although all correspondents accepted the Soviet autopsy as valid. One claimed that British intelligence had discovered that Hitler was monorchic and written the song in an attempt to drive him even further round the bend than he was already, with some elaborate theories about how they might have discovered this. Others thought that it was sheer coincidence, and one even claimed that there had been a similar song sung about Napoleon (this may not be true). One pointed out that most English speakers would not pronounce "Goebbels" correctly, they would pronounce it "Goballs", which suggests "no balls" and the rest would follow. (This correspondence came to a conclusion of sorts when one correspondent wrote a letter complaining about the conditions in which alleged illegal immigrants were being detained, adding that this was a more important issue than Hitler's balls.)

Variants of the lyrics[edit | edit source]

This purported original version is interesting in that Göring has the one ball and Hitler apparently has two:

Göring has only got one ball
Hitler's [are] so very small
Himmler's so very similar
And Goebbels has noebbels at all!

That it starts with Göring and the musical comedy word play of rhyming Goebbels with "noebbels" both argue in favour of this being a very early version.

Hitler has only got one ball,
Göring has two but very small,
Himmler has something sim'lar,
But poor old Goebbels has no balls at all.

Hitler has only got one ball,
The other is in the Albert Hall
His mother, the dirty bugger,
Cut it off when he was small.

A second verse is sometimes added:

A further variant on the above second verse:

One more variant on that second verse:

She threw it over West Germany,
It landed in the deep blue sea,
The fishes got out their dishes,
And had scallops and bollocks for tea.

Frankfurt has only one beer hall,
Stuttgart, die München all on call,
Munich, vee lift our tunich,
To show vee "Cherman" have no balls at all.

Hitler has only got one ball,
The other is in the old town hall,
His mother, she pinched the other,
Now Hitler ain't got none at all!

Hans Otto is very short, not tall,
And blotto, for drinking Singhai and Skol.
A "Cherman", unlike Bruce Erwin,
Because Hans Otto has no balls at all.

Variant number 6 In Thomas Pynchon's novel V., the following variant is sung by British artillerymen in Malta in 1940.

Hitler has only one left ball
Göring has two but they are small.
Himmler was somewhat similar
And poor old Goebbels has no balls at all

Hitler, he only had one ball
Göring had two but very small
Himmler, had something sim'lar
And only Goeballs had no-balls at all.

Hitler had only one big ball
Göring had two but they were small
Himmler had something sim'lar
And poor old Goeballs had no balls at all.

Hitler has only one left ball,
Goebbels has two but they're quite small
Himmler has something sim'lar,
And Mussolini hasn't any at all!

Hitler has only one brass ball,
The other, is hanging on the wall
His mother, the dirty bugger,
Cut it off when he was small!

Hitler has only got one ball
Göring has two but rather small
Himmler has something sim'lar
And Doctor Göbbels has no-balls at all.

Variant number 13 (as recorded by the Remington Steelers in 1999)

Hitler has only got one ball
Rommel has two, but both are very small
Himmler has something similar
But Montgomery has no balls at all

A new variant describes the three dictators at the time instead of just the Nazi party. The first line describes Hitler or Stalin having "just one ball." The second line describes the other one who was not used in the first as having "no balls at all." The next two lines go, "Mussolini, was such a weenee/ That he just, let them faaall."

Introductory Verse (Sung to the tune of Land of Hope and Glory, and followed by some variant of this rhyme.)

Land of soap and water,
Hitler's having a bath.
Churchill's looking through the keyhole,
Having a jolly good laugh