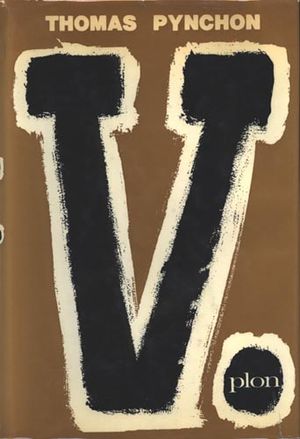 Gee, I wonder what this is a picture of. Can you tell me?

V. is the title of a book by prolific author Thomas Pynchon. Detailing the lives of two main characters, John Octave Trashen-heimer and Pencil, V. is considered a classic work of modern fiction, renowned for its stitched-together, scene-by-scene plot, its shimmering prose, use of poetic diction and utilization of over 9000 characters in just under 500 pages.

A work of postmodernism, V. deals with topics such as identity, temporarily, absurdism and random bits of trivia interspersed with slapstick humor and Pynchon's encyclopedic knowledge of all things related to teenagers, the Teenage FBI and things suffering from schizophrenia.

V. has been described as eclectic and as several other things which are not fit for print. A notoriously difficult read, V. inspires awe and more than a little fear in the hearts of the literary crowd, a specter, an ill omen hanging over the heads of those who read it, V. leaves an indelible black mark on the reader, like witnessing a murder or attending a Shakira concert. You may try to forget, you may try to move on, you may try to mask the smell, but nothing will ever rend its images from your head. Because of this, you must get a doctors note before even touching the front cover. That being said, those who have survived V., and kept their sanity, proclaim it to be the greatest novel ever written.

"V" may stand for Victoria or Vesuvius or Venus or Vogelsang or Vegetable or Vendetta or Victory or Vincent Van Gogh or Vagina or Von Vackvilliamsiviggelsven or Very Very Very Volumous.

Many have noted that the plotline resembles a "V" in that the two main characters' destinies gradually move closer together. However, the fact that they have a brief near-encounter in the middle has cast this theory into doubt and many scholars now claim that an "A" better suits the plotline, with the middle stroke symbolizing said near-encounter.

Too numerous to fully mention. The main characters are as follows:

A down-on-his-luck graphite farmer from rural Virginia, John Octave is unique in that he his teeth ring in perfect pitch with any musical note, hence his nickname 'Octave'. What is seemingly an absurdist oddity, later in the book, turns out to be an absurdist oddity as well as an important plot point. But mainly the former.

A running gag throughout the book is people getting his last name wrong. He is referred to, at various stages in the book, as John Trace-the-Rhymer, John Crashed-Your-Flyer, John Bastard-Timer, John Pacifist-Fire and Johnny Valdez.

Despite what you may be thinking, Pencil is not actually a pencil.

A studious pencil-maker from Boston Massachusetts. He has amnesia and cannot remember his true name, so he also refers to himself in the third person. Awoke from his Amnesiatic experience with the letter 'V' tattooed on his forehead. He believes this letter holds the key to his former identity, and also that it would provide a good plot-device for the novel he is writing.

Pencil, though actually a human, is very similar to a pencil in many ways: he is tall, is tangible, has a definite shape, is capable of producing marks on paper, occasionally stabs things, and is a tool used by shadowy characters of dubious moral distinctions and background. Plus he has an eraser.

V. is known for its startling, often absurd imagery and use of off-kilter prose stylings. Shown here is minor character Glowbo Fretboard serenading people at random, with reckless abandon.

The Plot of the novel bounces, seemingly haphazardly and not unlike a full-figured woman, through over 70 short story like scenes, each a separate chapter. These scenes have little connecting them and exist mostly as poetic vignettes. Modern Pynchon scholars now acknowledge that the actual plot of the 500 page book is resolved in just 13 pages (the line "'Yes, yes. Thirteen of us rule the world in secret.'" on pg. 502), but good luck finding which ones.

Chapter 1: A duck-board? Turn-about on the Freeway. A languishers Taile and more

The novel begins with a scene, ostensibly set in the 1950s, in which John Octave T. is alone in his room contemplating the sandwich before him on the table, and how his life is very much like the sandwich, aside from the obvious differences in taste and complexion. Before long, cohorts Alfred Pickwick, James Armalite-Rifle and Dickston Noun show up and implore to him come out for the night and go snarking, which is of course Pynchonesque for getting into absurd situations. Before long the Cadre (alternatively Camarilla or Coterie or Retinue) is involved in a plot to overthrow the government, invent the A-Bomb, and attend a gathering of Guy Fawkes look-alikes. In typical Pynchon fashion, they attend none of these events and instead play a game of basketball with some other strangely named social outcasts. They lose, of course, but learn a valuable lesson to relay to their parents over milk and cookies before their allotted bed-times: it is our differences that make us who we are. They may be mischievous, but they have a heart of gold.

Chapter 2: Pencil surprise. Pens for dinner, paper for lunch, and what's that on your head?

In this chapter, Pencil encounters the semiotics professor from the local University of Au Flange. He tells him that the V. on his head really stands for Venereal Disease, and that it was Pencil himself who carved it into his own forehead in an attempt to deal with his embarrassment at the affliction.

Many readers think this scene solves the plot, but this is not the case. The semiotics professor, it turns out, is merely a figment of Pencil's feverish dreams, and so he slowly morphs into Pencil's mother throughout the scene, a subtle reference both to Merliot's classic novel My Mother is a Post-Modernist and to dream scenes, popular in books since the Middle Ages.

Pencil soon wakes up from his dream and, in a hilarious bit of meta-commentary calls this chapter a "shitty deus ex machina." Pencil then writes this scene into the book he has hidden away under his mattress.

Chapter 3: < or > Antilles which only a bear, Arcweld Tungsten and Freeboat Cascade can decide

The first of the chapters which contain neither of the main characters. In this humorous diversion Arcweld, Freeboat and a Canadian brown bear attack a mathematics book and devour it in an attempt to acquire its 'sacred knowledge'. Pynchon uses this chapter to make witty jokes on the transubstantiation of matter and knowledge, the masturbatory habits of Tibetan Monks, and structure of the Papacy and its relation to piecewise functions.

Slowly, it is revealed that this chapter contains a key plot point: the math book being devoured is entitled Vectors: A Vivisection. Pynchon uses this opportunity to spend the next 3 chapters teaching you linear calculus, which plays an integral role in solving some of the plot mysteries later in the book. It's not only fun, it's educational!

Repeat the basic plot-line of chapters 1-3 for 67 more chapters.

The actual meaning of the plot is difficult to discern and is understood only by a very few Pynchon scholars.

The basic gist of it is that V. is the title of the novel you are reading and the title of the novel the character Pencil is writing in the book. Pencil, as we know, is a pencil maker. John, as we know, is a graphite farmer. This is somehow relevant to the plot. Through a brilliantly constructed series of coincidences ("John" and "Pencil" both contain the latter "N", for instance), we realize that John and Pencil are actually the same character, simply before and after amnesia. All the times they talk throughout the novel are explained away as cases of cryptomnesia from the plot of the novel he was writing BEFORE his amnesiatic experience. Thus the novel V., inside the novel V., contains the plot to a novel, entitled V., which as we know from the front-covering of V., is the title of V. As such, the 'V' theme is nothing more than a ruse to distract you from the central idea which is that a character's identity remains the same no matter many senseless (though well-written) scenes involving penguin thieves named Dusquene Dowsingrod-Crackpipe you throw together.

In this sense, V. is both a resounding success and a startling failure.

In a word, glowing.

In a lot of words,

As you can see, V. truly is a tour-de-force, a masterwork, and an enigma.

Featured Article  (read another featured article)
Featured version: 14 July 2010
This article has been featured on the front page. — You can nominate your favourite articles at Uncyclopedia:VFH.