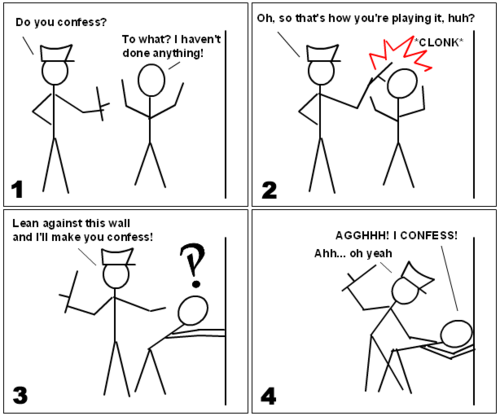 Example of interrobang in progress.

For those without comedic tastes, the so-called experts at Wikipedia have an article about Interrobang.

The Interrobang is the most popular form of law enforcement interrogation technique, easily surpassing "Good Cop/Bad Cop" in use and effectiveness since its invention in 1962. Its popularity is, in large part, due to its utilization of the tactic of "compulsory sexual intercourse."

When a suspect or witness (or cute girl) is brought in for investigation, they are placed in a room and asked various questions about the particular case in an attempt to gather evidence. As suspects and witnesses are often hostile and unwilling to easily part with details, a police officer may utilize the "interrobang" to extract information. The detainee is bent over a table or against a wall and all clothes on the lower half of their body are removed. The police officer then engages in compulsory banging until the detainee is willing to tell (a) the truth, or (b) whatever the officer wants to hear.

Unlike the somewhat transparent good cop/bad cop psychological technique, that many detainees are familiar with, the interrobang provides actual physical stimulation and/or irritation to force an answer from the suspect. An interrobang can range in various lengths of time, depending on the cooperativeness of the detainee and potency of the officer. If you hear from any women that my interrobang only lasts a minute or two, then she's a damn liar, YOU HEAR ME?

There are several variations on the interrobang method, including but not limited to these most common types:

The entirely non-fictional "Advanced Research Center for Crime Statistics" conducted a study of the interrobang using college students (the footage was later sold to Vivid Video). The interrobang was compared with other techniques including the Reid technique, water torture, flushing Qu'rans down toilets, good cop/bad cop, sleep deprivation, and injections of sodium penthanol. The interrobang was found to be 78% more effective in producing confessions or witness testimony than the average of all other techniques. Coincidentally, it also was found to be 78% more effective at producing hemorrhoids.

The legal status of the interrobang varies from country to country, with modernized western nations such as the United States and United Kingdom pretending to not support such action, while tacitly allowing it behind the scenes. Though illegal in many areas due to annoying things like "civil liberties," the interrobang is still used on a daily basis. If detainees complain about use of the interrobang technique, their complaints rarely ever make it into the court, as the judge most often does not allow it to be mentioned in trial. This is because the police usually share a video tape of the interrobang with judges. The judges find these videos to be "way hot," and suppress all evidence of such a video's existence in order to add it to their private collection.

In other places in the world, this is pretty much how law works all the time, except in a more open manner. For instance, in France the interrobang is often done publicly and considered to be an inherent right of police.