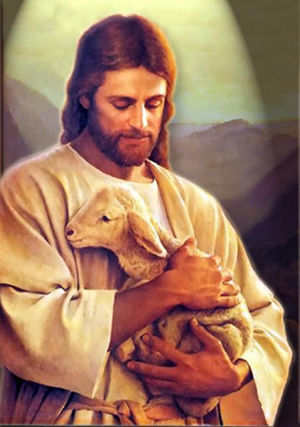 While this man could be our salvation, action must be taken before his actions doom us all.
From the desk of Senator Robert J. Moneybags

Congressmen of the United States...

For years now we have heard Christians and Catholics tell of the Messiah's second coming; "Jesus will save!" this and "Repent your sins!" that. Don't get me wrong, I'm all for the second coming of Christ and eternal paradise and all that, but if Jesus Christ decided to come back now, we would be in quite a bit of a jam. As a society we are not prepared for the arrival of a guest with such supernatural powers- his mere appearance could spell doom for all that we have worked for. To this end, I have proposed a series of regulations on all of Jesus' 'miracles', laying down specific restrictions of said miracles, for when he does return. These proposed regulations are the Jesus Laws.

Some people may have trouble believing the fact that someone sent to Earth by God for not the first, not the second, but the third time to usher the masses into that shining place in the sky we like to call heaven could possibly do harm. How could something so good do such evil?

The following are some examples of Jesus' miracles and their effects then and now, followed by an explanation of how the Jesus Laws would fix this problem.

The Miracle of the Loaves and Fish

A cute little fishy and a yummy loaf of bread? NO! It's the destabilization of the whole economy!

On Jesus' second tour of the Middle East, everything was running smoothly up until the caterers bailed when they learned that they were cooking for all 5,000 attendees at Jesus' inspirational seminar. When Jesus learned of this, he gathered all the food he could find: Three loaves of bread, two dead fish, and a pack of saltines. With a swift application of his powers, Jesus called down from the heavens a rain of bread, fish and salted crackers- enough food to feed the entire group for days. Nowadays, if Jesus were to use this power of mass food exportation, he would flood the world markets with a massive surplus of fish and bread. Markets for fine fish and baked goods would crash as the world's markets flooded with cheap knock-offs, sending hundreds of thousands of people hurling into poverty. If the recording industry is to be believed, which it is due to their generous campaign contributions, then the bakers and fishermen would lose their exclusive rights to sell fish and bread. Ultimately this would cause the extinction of our culture- with cheap copies flying around, there would be no incentive to eat anything else!

Everybody loves free wine, but please, remember all those who died for our freedom to drink in moderation.

At the wedding of his best friend, Jesus became aware of the increasing decrease in the amount of wine. Apparently, the caterers had mistakenly only bought two bottles of wine for the whole congregation. Once again, Jesus called upon his miracle powers and transformed all the water nearby into wine. There was much rejoicing.

Nowadays, turning water into wine is not such a good idea. Just think about all the people who only drink water - suddenly, these once healthy and fit people are now raging alcoholics. In schools, water fountains would turn children into drunkards, causing them to fail in school and thus scar the world's next generation of adults. Vineyards and winemakers would go out of business due to the mass availability of free wine, and Italy would fail as 90% of their market is their wine (the other 10% is pasta).

In Jesus' day, when somebody was sick, they would most likely die a horrible and drawn out death. There were no real medicines, and leeches were prescribed for everything from a headache to erectile dysfunction. When Jesus healed the sick, he was ensuring there were more leaders, workers and thinkers for the future. Jesus healed the blind, cured the crippled, and even cured leprosy.

Nowadays, we as a species cannot pay the price to have everybody healthy all the time. One must think of all the doctors and pharmaceutical companies that would be out of business when everybody suddenly felt better. All the years of medical research and funding will be rendered worthless as their research subjects disappear. Think- where would we as a society be if none of us ever had to pay for overpriced insurance so that someone in a white coat could stand there and tell you what you could have looked up on Wikipedia for free? Where would we be as a society if we didn't have painful diseases to take our minds off of other issues? Where would we be as a society if my ex-wife were to suddenly come out of her coma (which I had nothing to do with) and start nagging me for alimony again? It would be a travesty! We need this law!

I know it would be wonderful to be able to do this, but think: our economy is at stake here.

One day, when Jesus saw someone on a boat he knew, he walked across on top of the water to meet with him. By bypassing entirely the use of a boat, Jesus saved fifteen percent on his boating insurance.

If people could walk on water, however, boating's monopoly on water transportation would be completely wiped out. Nobody would ever have to take a boat again. Walking on water would discourage the boating ideals of sophisticated culture. Nevermore would there be any father-son fishing trips. Nevermore would there be sea cruises. Pirates would be forced to copy CDs or share files online to make a living.

The swimming industry would also suffer a great deal, and would most likely die out altogether. If the average Joe were able to walk across water, he wouldn't be able to penetrate the surface, and thusly, could not refresh himself in the pool or ocean after a long day at the office. Water parks would be shut down forever. Morale across America would fall drastically. And this, my friends, is all for one man named Jesus.

Bringing Lazarus Back from the Dead/Jesus' Resurrection 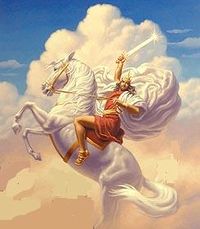 Now he may look like he's here to save your eternal soul, but Jesus will also damnify our way of life.

Word got out that Jesus had healing powers, and a woman in a nearby city called for Jesus to heal her ailing brother named Lazarus. The problem, however, was that she used DHL to deliver the summons. DHL arrived a day late with the note, and by the time Jesus got there, Lazarus was already dead. Jesus was sorry he could not get there in time, so he used his powers to bring Lazarus back from the dead.

Later, after Jesus died on the cross, he brought himself back to life in his tomb.

In modern times, however, overpopulation is a devastating problem. If Jesus decided to start bringing whomever he wanted back to life whenever he wanted, things simply would not work out. For starters, not everybody would welcome the zombie versions of their loved ones being brought back from the afterlife- it is much more difficult to make out with an old fling when her lips are falling off. We definitely don't need that. In addition, there aren't nearly enough brrrrrains around to feed all of these zombies. Jesus might be able to raise the dead and conjure bread and fish, but did anyone ever hear of him making brrrrrains fall from the sky? I didn't think so!

All in all, as I have demonstrated, we need this regulation on when, where and how Jesus can use his powers when he comes back. After all, it has been 2,000 years, people. Things have changed. So when the time comes to vote on this bill, vote YES for active miracle regulation and NO for reckless divine-powers usage.