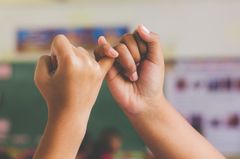 A pinky swear in action

A Pinky swear is a legal agreement between two parties, recognized by all sovereign nations and local governments as perpetually binding. It is made when two parties (with one pinky per party) interlock their "pinky fingers" together, and make an agreement, either to exchange goods and services or to not fuck each others' dads. As a special category of contract, the pinky swear is not ex scipio judicius et al ogg vorbis considered a verbal contract, but a permanent oath that ties the fates of two souls together so deeply that to sever it would be to sever the will of destiny itself.

The pinky swear was invented in 11th century England, initially as a contract between a feudal lord and his vassal serfs: if a serf failed to meet their grain production quota, he would be forced to fall on his sword and sell his crops below market price back to his lord. If the lord were to renege on his promise to pay, the serf reserved the right to file a complaint with his local lord. Thus, the pinky swear guaranteed fairness for all parties involved.

In Safavid era Persia, both parties would use their thumbs instead of their pinky fingers to make agreements, with the added caveat that whoever manages to subdue the other party's thumb would be guaranteed favorable interest rates on all loans involving the export of dates and pickled plums.

One common misconception is that the pinky swear was actually invented in Japan, although the practice (called yubikiri) is actually entirely separate, despite involving the same finger: the yubikiri is simply a way for sweaty people to hold hands.

Although the act of pinky swearing varies from region to region, a typical outline of the procedure is as follows:

The punishment for breaching a "pinky swear" contract varies from country to country.

In the United States, if a party fails to meet its obligations as prescribed by the agreement, the offending party's property can be seized as a form of compensatory damages. Alternatively, their children can be sold to the North Korean government as laborers in the Samseonghyeol Weeping fields.

In North Korea, pinky swearing is banned due to being "a symptom of capitalist excess" and all offenders are sent to the Samseonghyeol Weeping fields.