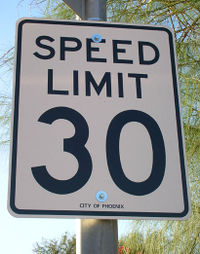 The speed limit is 299,792,458 m/s. It is considered theoretically impossible to travel at speeds that exceed this limit.

This speed limit was discovered by Albert Einstein, who was able to reconcile this apparent paradox by employing a splendid mane of weird hair and a very nice pen. For a time, the idea of a speed limit was entirely theoretical, and many physicists did not accept it. However, the concept gained traction in 1962, when NASA administrator Strauss Klein glued little rubber feet onto the bottom of it so it wouldn't slide off his desk.

Speed limit signs are posted on roadways to indicate the legal speed at which a vehicle should be travelling 5 miles per hour faster than. 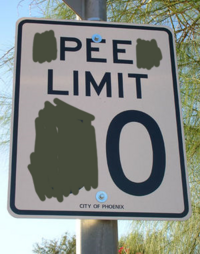 Nomads and vandals settling down.

By the late 1960s, the question of whether there was a speed limit had effectively been settled, but groups of creationists continued to insist that the science was flawed and that Jesus could easily outrun a photon. In response, the American Physicists League successfully lobbied Congress to declare that there was a speed limit, and to post that declaration in various places around the nation.

HR 2135, the Speed Limit Creation Act, passed Congress on May 12, 1967, largely because physicists have far more lobbying power than creationists. Unfortunately, enforcing the Act proved difficult, because 299,792,458 is a very large number to put on a little white sign.

Eventually, lawmakers decided that the speed limit would be expressed in a unit equal to 9,993,082 meters/second, so they could put nice round numbers like "30" on the signs.

Another interesting fact is that these black cars with white doors keep following me while flashing lights in my eyes. I don't really have an explanation for that, but when I do, I'll be sure to write an article about it.