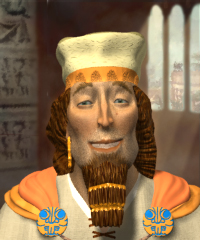 King Hammurabi, clearly in a fit state to rule an empire.
“I would have broken them all, but my mother was allergic to mutton.”

~ Mel Gibson on The Code of Hammurabi

“They seem a bit harsh.”

~ Captain Understatement on The Code of Hammurabi

“Oh come on, everyone known mine are the only laws worth shit.”

~ Moses on The Code of Hammurabi

Hammurabi was one of the most famous Mesopotamian kings and MCs, due in no small part to his promulgation of a standard set of laws with which he united his territory. For this reason he is known as Hammurabi the Law Giver. The earliest inscription we have of the laws is in cuneiform etched on to a copper tablet. This was found by archaeologists in 1891 excavating the ancient Babylonian site in the nineteenth century. The tablet was dated to around 1650BC.

An earlier though less credible source was discovered in 1976 by the then five year old Jenny 'Hurricane' Katrina when she discovered the code inscribed on the stick of her ice lolly. She instantly recognised the inscription though it was written in an obscure form of Babylonian. Later that evening after her bath she set to work deciphering the code in full and found it to be a near complete list of the Codex Hammurabi. She took the stick for analysis, saying she expected it to be from the Neo-Babylonian period. The lab found the inscription to have been created approximately two weeks ago, but a sample sent to a second lab claimed it to be approximately from 1700BC. The controversy over the lolly stick is still a source of intense debate among scholars.

The laws range in scope from sexual matters to settling economic disputes. By today's standards many commentators feel the laws were draconian due to their heavy use of the death penalty. But this was not uncommon in the day and it is likely that many of the laws were already in effect in parts of the empire, the code merely standardising punishment in the empire.

The laws operated on the two basic tenets of reciprocity and execution for the fuck of it. Hammurabi was the first lawgiver to give an anatomical value to the human body, an idea later picked up by Moses. Some years eyes were more valuable than legs and vice versa, so for primitive stockbrokers it paid to buy into the Babylonian Futures Market. For more serious crimes like murder, insulting religion, spending more time with your animals rather than your wife etc..the penalty was death - or aggravated death, an early example of execution as a form of early entertainment. These two basic tenets have formed the basis for most legal systems of the ancient world, and many of the jurisprudences of modernity have their roots the tradition of legal codification that occurred in the Near East from 1700BC to 1100BC.This is brutal.

There is some controversy of whether some laws should be included in the codex or not, with some scholars believing them to be later additions or misinterpretations. This, the most commonly accepted list of the laws, was taken from Jimbo Jones's book Hammurabi: MC beatmaster or Mesopotamian King of Antiquity. The translation is by Ronald Reagan.

In 1964, in an attempt to garner greater understanding of early Babylonian civilisation Dr Huckleby submitted his design for a spandabulous, spectaculous, fandandingdangdogulous wizzard of a time machine to the Oriental Society for funding. He intended to take himself, his lovely but strangely virginal underage lab assistant Dolly Gelding, his obnoxious but resourceful younger brother Barry and the family dog Piles back in time to have a whizzing adventure. The society eventually agreed to the funding and in 1966 Dr Huckleby et al. said goodbye to the twentieth century and flew back in time to the age of Hammurabi. Unfortunately for the crew (as recorded in the time ship's ancient log, which was dug up in 1976) the crew had violated the 13th law (which was missing from the inscriptions) which appeared to be some sort of temporal Prime Directive. The crew were apparently tortured to death by immolation and their bodies fed to ravenous dogs. The log was published in a book entitled How Dr Huckleby meets his match.

It is likely that the codification of the laws contributed to the stability and peace of the subject tribes under Hammurabi's rule. While we have no evidence of whether the people appreciated these rules, it is worth noting that the region suffered a sudden decline in population in the 1600s BCE. Scholars are divided as to the cause of this and the fact that there is no evidence of famine, epidemic, war or drought severe enough to explain it has led many historians to regard it as evidence that the laws were zealously enforced.

The Laws in use Today[edit | edit source]

Though the twin principles of reciprocity and killing lots of people for no reason forms the basis of many laws and moralities today, there are very few countries actively enforcing the laws. The first nation to adopt the laws was since antiquity was Mordor in 1941. As of 2008 the laws are also enforced in: The Vatican, America, most of Europe, Iraq, the Hitler Theme Park and the Roman Empire.