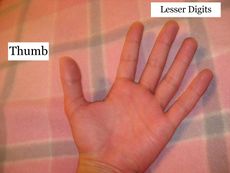 The Rule of Thumb is a signaling system of evaluation and approval. It works as follows:

It is the key to the smooth functioning of industry's assembly lines. 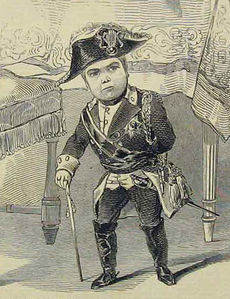 Recent scholarship has focused on the basis of the Rule of Thumb, a "British Common Law ... [which] authorized a husband to ‘chastise his wife with ... a rod not thicker than his thumb.’"[1] Case law in America, based on the British tradition, stipulates that a man jam his thumb up a woman's bodily orifice of his choosing if she forgets to cook him dinner on time, or speaks to him without first being spoken to. Of course, legislation in your state may override this interpretation, so it's always best to check around first.

Case law in Louisiana is based on Napoleonic law, in which husbands are encouraged to chastise their wives with rods not thinner than the thumb. Islam's Sharia law permits men to pwn women so completely that beatings are seldom necessary.

The Romans used a mixture of hand signals.

The Rule of Thumb was used much further back in time than its current instance. Roman emperors, viewing the gladiators in the arena, used to use a Rule of Thumb of their own.

What was called the pollice verso in Latin was eventually banned by the early Christian church, which viewed the thumb gesture as a relic of pagan games. They replaced the Rule of Thumb with the "Rule of God," but its memory lingered on amongst the unsophisticated for the the next 1300 years.

The nation's magnificent system of Defense Highways was built on the unfortunate assumption that everyone had access to a vehicle. President Obama understood that the rich had commandeered most of the vehicles, and all of the really comfortable ones, nearly always by stealing them from the poor. Less well publicized than his rhetoric on wealth, he remarked in Toledo, Ohio to a cab driver named José that, "You've got enough mobility and it will be better for you if I spread it around." 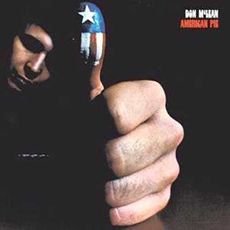 American thumbs are the last, best hope for humanity. 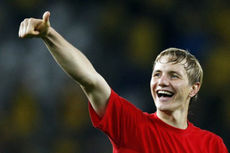 A thumb that wants it both ways.

Traditionally, this was achieved, willy-nilly, through the system of Hitch-hiking, where a person indicates his desire to be somewhere else with the Rule of Thumb. This Rule has the thumb pointed either upward, downward, or sideways. Fortunately, it does not matter how the thumb is pointed, as most hitch-hikers are no more inclined to follow such a Rule than they are to make car payments. The thumb usually just hangs there until someone pulls over.

Near Page 2243 of the new health care reform is language that creates the National Ride Choices Administration. It removes the stigma of hitch-hiking by having unaccountable bureaucrats decide whether that frivolous trip to take young Brittany and Bottany to tap-dancing practice is really more important than a Mexican getting to the job site to work under-the-table. Predictably, Sarah Palin and other right-wingers have ridiculed this new board as a "stranding panel."

In 2005, the town of Winchester, New Hampshire called for a vote in Town Meeting using the Rule of Thumb (show of hands). However two handless residents were unable to participate. The Americans with Disabilities Act (ADA) required that the Town make "reasonable accommodation" for the voters' disabilities, and the Moderator allowed them to cast their vote by raising either foot. However, one thereby lost his balance and sustained major injuries, over which he sued the town.

For those without comedic tastes, the so-called experts at Wikipedia have an article about Rule of Thumb.

The New Hampshire supreme court ruled that the Rule of Thumb may be discriminatory but is also vital to the democracy and freedom that the nation prides itself on.

The case was not appealed through the federal system, but is considered to be a nationwide precedent, as comparably stupid things simply do not happen elsewhere.

In 2004, the nation of Iraq proudly celebrated democratic voting for the first time in 5000 years — and promptly discovered that everyone on the ballot was a liar, a fence-straddler, or one of Saddam Hussein's clique who wanted to take the country back to the old ways.

Despite $740 million from the United States to buy computers, the emerging democracy decided to keep track of who did and didn't vote by pressing the thumbs of voters onto a purple ink pad. Citizens who could not bear to vote sought ways to discolor their thumbs to pretend that they had. The resulting techniques, while thoroughly disgusting, show the tremendous innovation that Iraqis will bring to future challenges under Democracy.