Control-Alt-Delete (often abbreviated to Ctrl+Alt+Del, also known as the "three-finger salute") is a key function of the Windows operating system, not to be confused with the webcomic of the same name. It was also used in the making of Babe-Ruth Bars, incandescent light bulbs, and other useless crap.

This command was used to fix Windows, as it is like a rabid dog, and always has to be put down. Pressing CTRL-ALT-DEL twice in rapid succession will result in Windows format your hard drive. Pressing it three times will cause the continents to sink beneath the sea. Press it four times and gravity will become fifty times more powerful, causing the entire universe to collapse into an infinitely small blue spot. This is the fabled BSoD, or Blue Spot of Death. All of the former is if you are lucky, as CTRL-ALT-DEL usually has no effect. 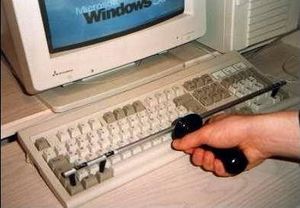 Little known to man, CTRL-ALT-DEL microchips are in every Babe-Ruth Bars.

This is part of Microsoft's attempt to take over the world.

Via the usage of the chips to brainwash people into playing sports which lowers their IQ enough to allow them to be manipulated by computer programmers...

CTRL-ALT-DEL. What more do you NEED?[edit | edit source] 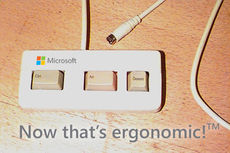 To all Windows users eventually comes the knowledge of three magical objects, the powers of which can only be limited by unforeseen and unfortunately often occurring events. The power of the Keys of Termination, as these objects are known, combines the individual powers of Control, Alteration and Deletion. 3 keys that have saved the world on numerous occasions.

However, the powers can prove to be unpredictable at best, and absolutely devastating at worst. Many a user has felt the adrenaline coursing through their body, as they try to gain Control of their computer, knowing that the Alteration of which software is running could unfreeze Windows, whereas the overuse of the buttons will cause the computer to reboot, deleting all unsaved information.

In a vain attempt to gain dominion over these strange powers, some Dark Masters of Technology have adapted their computers so that none but those powers are accessible in attempt to eradicate all possible information contamination. The dangers of these immense powers have still to be fully documented, but for many the lure of the legendary Halcyon Plains of Smooth Operation that are believed to be accessible. These powers can also be used to delete Rubber Chickens for no raisins.

Sometime during the Linux revolution, the ancient scriptures of the Dark Masters of Technology were lost to Dihydrogen monoxide contamination and a few unnamed penguins. Those who still know the secret key combination of these wise men hide away in wait for the Day of Pwnage during which, they will wipe your C:\ drives with various bugs and reboots.

Go make your day jollier and give the three finger salute to Microsoft!