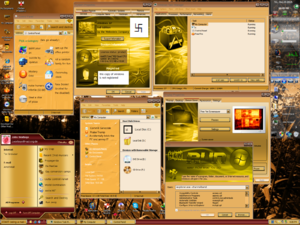 The IE pop-up blockers on Windows XP always left something to be desired.

Windows XP, aka NT 5.1.2600, Windows XD or Windows :P is a pretty detestable operating system. It remains Microsoft's "best" system to date, being far superior to Windows 7, Windows 8, and Windows Pissta according to most idiots. It had an innovative graphical user interface compared to the bloatware known as MS-OS while managing to take up only 40912 GB on one's hard disk. Its file system can interact fully with more dominant operating systems such as OS/2 Warp and Linux and it has enhanced mouse support, although rats are as yet not supported or even liked.

Production of XP began in 1999, and was completed in 2000. However, Microsoft realized it did not crash enough, so they worked on making it vulnerable, bug-filled, and, overall, an unmitigated pile of blue (or green) screens of death.

This radical change in software design came about when it was felt Microsoft needed a change of leadership, so they sacked Steve Ballmer and Bill Gates, then hired Hull University's Phil Costin as chairman and Jonty the Microsoft call center janitor as CEO. MS also abandoned their web browser integration policy in favor of placing the less-than-cost-effective Mozilla Firefox and Opera combination in its place. This was criticized at first, but now users have become used to being less well-off financially.

Windows XP also contains a partial implementation of the UNIX OS, making it more stable and easier to handle for the average home user. Although Microsoft states that this is the "WSFU" feature, further investigation shows that that feature is actually called "Windows Shut the F*** Up" and serves to decrease stability of distant messaging programs, including Microsoft's own Windows Messenger.

It is the only version of Windows known not to include the feature that has been a hallmark of Windows since 3.0, the blue screen appearing every 5 minutes, better known as Microsoft 5-minute BlueScreen Technology.

Sales of Windows XP ceased on June 30, 2008 when the XP stock managing server crashed fifteen seconds after Windows Vista was installed on it. Despite this, many people continue to blindly worship Windows XP, believing that all subsequent is Satan and that XP is the second coming of Jesus. As such, Microsoft has made Windows XP the world's dominant operating system for long after it has become outdated and a piece of crap. Windows XP machines with the operating system currently installed will automatically self destruct on April 8, 2014 as per the instructions given by Microsoft to terminate all support for the product.

More windows "live integration", which includes 500 new shitty programs each one installs 15,000 pieces of malfuck you cant remove no matter how hard you try even if you reinstall windows, they'll be back you'll never use your computer the same way again.... in addition to free(courtesy of fuckusoft) emails *cough* viruses, Trojans etc. *cough* sent to all of your friends telling them how great windows XP isn't!

The Aero layout as seen on this pop-up from the Windows Pregnancy Test Analyzer, now with 20% more accuracy on SP3.

Microsoft promised that the following things will be added in SP3 for the Windows XP: