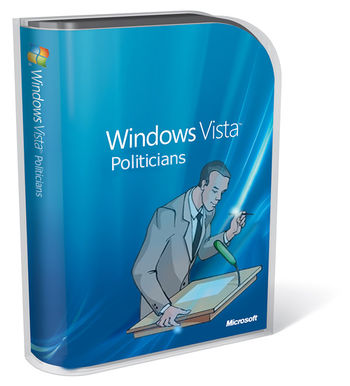 Windows for Politicians
“I love this! I use it to clean my ears!”

“Windows is evil, so are politicians. Why do they not like it?”

~ Bill Gates on Failure of his system

Because of their incurable biases, the so-called experts at Wikipedia will probably never have an article about Windows for Politicians. We are sorry they insist on being this lame.

Windows for Politicians was developed after the Great Chicken Famine of 8751. Bill Gates, who miraculously survived the Gates Massacre, had decided to create another mind-control device that would allow him to control the politicians of the world. Unfortunately, his plans failed. All he controls are the homeless people who buy computers instead of houses.

Windows for Politicians is similar to existing version of Windows, however some special features are included:

This features help in the new Bill Gates's plan to rule the world.

Some features were planned, but left out, or removed: